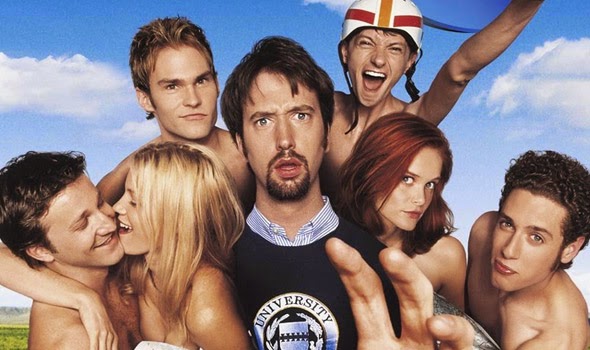 The plot’s direction reflects what most road trips have in common: an excursion is focused, but the side trips and detours are what make the journey all the more amusing. Here’s the hook: Josh Porter (Breckin Meyer) is a student at Ithica University in New York, who maintains a long distance relationship with his sweetheart Tiffany (Rachel Blanchard). Suspecting that she is cheating on him because of her lack of communication, Josh sees it as an ideal time to jump on the advances made by classmate Beth (Amy Smart) and have sex with her. The problem: Beth videotapes the encounter, and when Josh records his own tape for Tiffany, both get mixed up and the sex video winds up in the mail.

With an exam on the way and not enough money to buy airplane tickets, Josh and his three pals pack up and head for Texas on a three-day road trip in hopes that they can retrieve the infamous sex tape before Tiffany gets a hold of it. Such clasps can only mean plenty of humor-inducing subplots, and the numerous misadventures these four college guys have are emphasized in comedic tones easily as crude as those of a typical Farrely brothers comedy. Some of the gags are hilarious (one of the best belongs to a restaurant waiter who keeps French Toast warm using his body heat), but others are tone-deaf (such as one involving one of the guys losing his virginity to an overweight woman who wears leopard panties). Narrating these occurrences is MTV’s radical comedian Tom Green, whose character, Barry Manilow (!), accounts for some of the picture’s other big cackles (with the rat/snake joke as mentioned earlier being the only reservation).

So far so good, at least moderately. A turn for the worst waits in the wings, however, when the plot then becomes back-burnered by this intense dose of humor and causes the movie to get so chaotic that it actually turns the villain (being Beth) into the heroin. Struggling to get things back on track, the jokes get even sicker and sicker, eventually turning our shrill laughs into utter groans of discomfort. We expect this kind of treatment with most teen comedy nowadays (last year’s “American Pie” successfully handled a similar situation), but not at the expense of old folks or women (most of whom are thrown into the movie simply to supply hormone-raging teen viewers with satisfying amounts of uncovered boob shots). The tastelessness of sexually-oriented comedy creates big laughs in “Road Trip,” but unfortunately, not enough to overcome some of the film’s dense negative energy.

To dismiss the picture entirely would be unfair; given its handful of badly-executed jokes (not to mention its variable pace and gritty perspective of coming-of-age substance), “Road Trip” is still pretty solid on other grounds. The characters are well founded, the premise maintains a hairline of focus, and the majority of the humor has excellent precision. Just don’t go in expecting another “American Pie.”