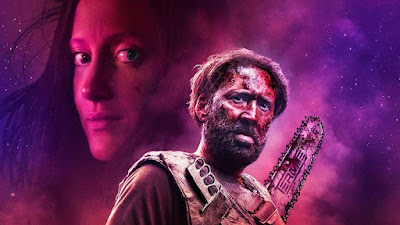 In theory, a movie like “Mandy” would be right up the same alley of brazen gorefests that have been known to captivate my morbid sense of voyeurism. Ripped from the familiar cloth as any number of audacious horror stories set in the lurid world of pulp fiction, the picture makes a bold promise from its very first frame: all that is about to happen will be unlike anything we have witnessed on screen – or, at the bare minimum, fresh enough to draw comparisons to Dario Argento and Mario Bava, the architects of the decadent excess we associate with Giallo. Indeed, countless critics and colleagues have hailed the picture as a triumph of its medium, a surrealistic experience where the framework of the familiar revenge formula is twisted into a fever dream of contemplative symbolism and thematic excess. And who wouldn’t want that, especially nowadays as the genre appears caught somewhere between the extremes of vague nuance and gratuitous overkill? 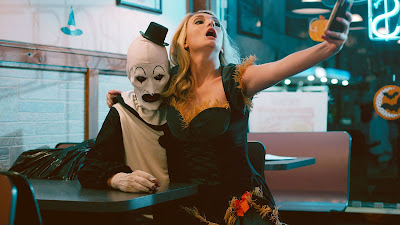 Marginal movie villains are in copious supply in the films of today, but plausible, convincing ones have become an increasingly rare breed: they now seem to persist more in theory than in practice, where they can be liberated from old formulas and allowed to wreak their sense of chaos in the untamed wilds of a perverse imagination. Once in a great while, one will even find its way in front of a film camera that earns the right to manifest them; if a skilled director or writer has the capacity to evolve their sense of animosity beyond the shackles of the ordinary narrative, we get captivating antagonists like Pennywise, Anton Chigurh and Agent Smith at the center of the chaos. For a brief time during the early minutes of “Terrifier,” we can sense the spark of the latter. Imagine the scene: a mute clown in white and black makeup with bleeding gums and inhuman teeth appears out of the shadows of Halloween night, follows two 20-something women into a late-night pizza parlor and ominously taunts them. Not a word or sound escapes his mouth, although his mannerisms reflect an unhinged insanity brewing beneath the exterior. Later, long after the clown has been tossed out of the establishment for vandalizing the restroom, the girls return to their car and discover their tire has been slashed, setting a chain reaction of events into motion that will end with immeasurable death and blood splattered all over the pavement of a run-down warehouse in the city.
Read More >
No comments: