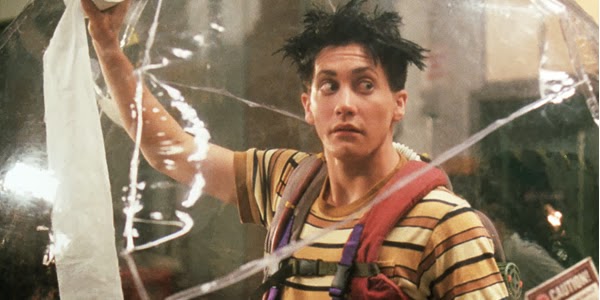 To ultimately assume that “Bubble Boy” is an insult to Demaret’s son is a bit of a stretch; it doesn’t poke fun at the situation its star player is in. Unfortunately, that point of relief doesn’t make any difference in this listless, mean-spirited and utterly morbid little comedy, which is being defended as a movie with a big heart when in fact the studio should be more concerned about justifying its brain (or lack thereof). The movie is the farthest thing from genuine sensibility I have seen in a long time; not only does it lack the courage to openly discuss the issues it raises, but it manages to enforce some of the oldest negative stereotypes you could ever imagine. Calling the picture an insult to the immune deficiency syndrome is inappropriate; however, calling the movie an act of pure idiocy is bordering generosity.

The bubble boy of the movie is Jimmy Livingston (Jake Gyllenhall), a 16-year-old good-natured guy whose crazy mother (Swoosie Kurtz) spends all of her efforts ensuring her son’s safety—feeding him nutritious snacks, thoroughly cleansing his room of germs, and reading him bedtime stories that end on the same note: the hero walking out into the world and dying because of exposure to germs. Jimmy befriends the next-door neighbor Chloe (Marley Shelton), a sweet and generous teenage girl who sees past his restrictions and admires the person on the inside of the bubble. They talk, they laugh, they enjoy each other’s company... until Chloe realizes that their relationship can’t go any further, panics, and runs off with a awkward rock musician named Mark (Dave Sheridan), whom she plans to marry in just a couple of days at Niagra Falls. But Jimmy, reluctant to lose the biggest bright spot in his life, decides to go after his love interest and win her back from the clutches of a wholly detestable person.

The movie is mostly a chronicle of Jimmy’s road adventures, from befriending a quirky (but wise) cab driver named Slim (Danny Trejo) to even crossing paths with a train full of circus freaks and a bus load of grinning idiots lead by Fabio. Several similar events play out during the 95-minute travesty, and practically every one of them has at least one thing in common: they aren’t funny or inspired, and they always manage to insult at least one group of people (usually those either of different ethnicity or different religion than the main character, essentially). The treatment of the bubble boy himself, meanwhile, plays out without a shred of care or concern, and while it doesn’t directly insult his disorder, it does manage to make him the unknowing butt of some of the worst jokes seen in comedy since “Saving Silverman” was playing in theaters. A lot of the gags feel like leftovers from a really bad Farrelly brothers comedy, too, such as the need to function on provoking humor at bodily functions and allowing the characters to accidentally fall into some very embarrassing (and crude) situations.

The script is an enormous pile of missed opportunities, hampered by poor character writing and an unnecessary need to follow plot twists that do not relate much to the central story. But given all of these faults, nothing quite prepares us for the movie’s big final discovery, which is so insulting and ultimately nauseating that it leaves us extremely disheartened. I am reminded of a moment last week when I witnessed a teen couple emerge from the movie theater as I was going in, both with pained expressions on their faces. A nearby friend asked, “are you two constipated or something?”, to which one of them replied “No, we just came from seeing ‘Bubble Boy.’” What an appropriate reaction.

With everything that’s happened to poor Mrs. Demaret over the years, at least she can walk away from this situation with one positive thing on her mind: the movie that she thought would offend the legacy of her son did nothing of the sort. Instead, it insulted humanity in general.