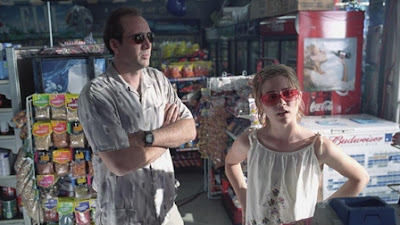 Poor ol' Roy just hasn't got a clue. A man married to his work is bound not to have much of a personal life, but when the person in question is actually a very successful manipulator and con artist, you'd expect him or her to have some kind of free time to spend on developing social skills. So is not the case with this reclusive dude, however; aside from being an incessant neat freak who obsesses over the slightest possibility of germs contaminating his environment, he's short-fused, pigheaded and outwardly pitiful to himself and to all those who cross his path. And yet we admire him anyway, because once you peel away the hypertensive demeanor and most of those erratic impulses of his, you have a sweet, charming and lovable guy living underneath. It's not everyday you find yourself rooting for the con man.

As the center of Ridley Scott's "Matchstick Men," Roy supplies the opportunity to view all these facades from several different angles and through many significant subplots. He is played by Nicholas Cage, an actor whose diversity and energy make him suitable for almost any role with quirks. In fact, during the movie's opening sequence in which our hero preps for a busy day by cleaning his abode in a Joan Crawford-like sense of anal retentiveness, Cage's approach is subtle and realistic enough to feel appropriate for a screen persona of this flavor. It becomes obvious much later on that no one else could have probably done a better job in the role, too.

The movie opens with lots of character establishment, but it certainly doesn't forget to send us directly into a sizable story, either. Roy, the aforementioned con artist with a significant struggle as a human being, is riding high and proud after he and his partner in crime, the blunt Frank Mercer (Sam Rockwell), successfully pull off their latest illegal stunt by screwing an elderly couple out of hundreds of dollars without so much as breaking a sweat. Unfortunately for the big man himself, however, he has to take medication in order to remain halfway coherent, and when he accidentally knocks his bottle of pills down the sink drain, he is forced to set up a meeting with a psychiatrist for mental evaluation. This, in turn, sets off a change of events that will lead Roy out of his bubble and into reality, one of the most important life-altering events being the discovery that he is a father to a teenage girl. Could the same man who is afraid to step on his own carpet while wearing shoes ever hope to have any kind of relationship with the kid he never knew existed, though?

Ah, but that's part of the undeniable charm of "Matchstick Men," a film that is genuine, sweet, strongly acted and well written at a time when such qualities are virtually nonexistent at the local multiplex. This is the kind of movie that lifts the spirit and flaunts the charm around like an old personal friend, and as such it is also filled with moments of drama, tension and tragedy that complicate the flow but inevitably add to the plot dynamics. In the end, we can't exactly say that the time spent with these characters has been perfect, but the result is genuine enough for us to bypass any quibbles we might have had during observation. It's not even a challenge to say that this film is almost an equal cinematic triumph to Cage's last vehicle, Spike Jones' innovative "Adaptation."

The secret to the picture's success lies not in the fact that it has several distinctive (and solid) subplots popping up at every turn, but in the fact that it cares enough about character relationships to put everything else aside for a time. Roy's connection to his daughter Angela, played expertly here by Alison Lohman, begins in a manner that we expect it to—with a sense of unease and awkward tension between the two obvious opposites—but rather than allowing the script to overly emphasize differences, it allows both characters the chance to get to know each other and learn to tolerate those quirks and oddities. What were once two strangers eventually become very close-knit family members, so much so that Roy actually feels obligated to let his own daughter become part of his con team, even though deep down he knows how wrong it is to expose a kid of that age to any kind of dangerous illegal activity.

The script by Nicholas and Ted Griffin is a great compliment to the on-screen energy exemplified by its lead stars, as the various plots are developed, focused and know exactly how to handle a situation when it crosses difficult territory. One scene in particular towards the end, involving an unexpected confrontation between Roy and a person who hurt him dearly, is especially well done—there are probably countless directions this particular scene could have gone and various emotions it could have implored, but rather than being patronizing or too harsh on its characters, the delivery is subtle and yet satisfying, sad but at the same time uplifting. A clean, happy ending is not what we get with "Matchstick Men"; what we get instead is an unconventional turn of events that leave us shocked, disheartened... and yet optimistic. Easily the most distinctive character study seen at the theater in a long time, this is also one of the year's only theatrical achievements brave enough to realize that being conventional is only one way of creating story closure.