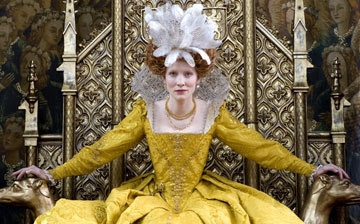 Shekhar Kapur’s “Elizabeth: The Golden Age” marks more than just a return to an England of visual opulence and intricate political intrigue, it also underscores a personal revelation in the life of this cinema aficionado, whose first self-appointed task in the fall of 1998, just a few short days after gaining certified status as an online film critic, was to see and review a fairly obscure indie costume drama that chronicled the early years of the reign of one of the country’s most important and famous monarchs. The person who invests much of his or herself into a personal pastime for an extended length of time never measures their dedication according to months or years, but when an occasion arises where we are reminded of where we’ve come from and how far the journey has taken us, it often boggles us. The appearance of this endeavor, a follow-up to a movie that I hold in high esteem for essentially being the first classic picture I saw from the perspective of a film analyst and writer, is a sobering prospect. It hardly seems possible that nine years have come and gone, and here I am still writing, analyzing, and caring about the material that I see on a theater screen.

To revisit that prospect, I am also obliged to return to Kapur’s vision of Elizabethan England, which occupies celluloid less like costume drama and more as stylized art with a Bollywood flair. Rich in textures and layers, brimming with a visual confidence that completely removes itself of arrogance, the look of “Elizabeth” remains the film’s most remarkable and enduring trait. Whereas a director straight out of Hollywood would have seen the era through eyes spoiled by Masterpiece Theater, the Indian director instead chose to stage his movie in vast halls filled with exotic tapestry, a place for his characters to move, sneak and conspire while high-reaching shadows gave them secrecy from those in opposition to their revolt. So distinctive and astonishing was the reach of Kapur’s production values that it might have been easy for anyone to be distracted enough by it to allow the plot to completely escape their notice, but thankfully it didn’t; the script by Michael Hirst was an equally potent endeavor, brimming with political intrigue and strategy that conducted itself as if the characters were pieces on a chess board being manipulated by two cutthroat competitors. As both a technical and narrative triumph, it truly is one of the very few flawless films I have seen in my time.

Now comes “The Golden Age,” a follow-up to that feature, which takes place 27 years following the events of the first film. Much has changed since then, and not just in the life of the Virgin Queen – the franchise (so aptly named since it is the director’s intent to make a trilogy of films regarding this monarch) is now in the hands of Universal Pictures, which ensures the filmmakers a bit more financial flexibility, and Cate Blanchett, the young beauty who once upon a time was simply another hard-working actress caught in the trenches of obscurity, is now a world-renowned movie star who has supplied her talents to more than a few brilliant films in the recent years. What has changed even moreso, and perhaps not for the better, is the scope in which these collaborators foresee when continuing on with the story of England’s last Tudor monarch. Gone, for one, is the dark and menacing tone of its predecessor; in its place is a production that is equally vast, equally stirring, but also so incredibly over-the-top that it leaves one wondering if the idea of a follow-up was rooted just on the basis of audiences getting to see the luscious Blanchett spend another two hours playing elaborate dress-up with 16th-century gowns. No, this is not the grand and sumptuous affair we experienced nine years earlier; rather, it is somewhat of a misguided endeavor, fearsome and passionate with its visual flair, but incredibly confused as to how it wants to address Elizabeth’s life beyond what has already been realized.

The movie opens in 1585, nearly 30 years after the first one has ceased. Contrary to the suggestion of an epilogue that protestant rule in England eventually rid the country of all religious conspirators and dissenters, this era finds fervent Catholicism still running rampant across Europe, spearheaded in many ways by the powerful Phillip of Spain (Jordi Molla). His is a faith that demands solidarity in European rule, a conviction that forces neighboring countries – competitors or otherwise – to bow to his influence. Except, of course, that most of Europe was predominantly Catholic in the 16th century anyway; England, on the other hand, had been in rule for the previous 27 years by a queen who was not only Protestant and “heretical,” but illegitimate, childless and marriage-less in a time when total female reign of a state was a brash notion. Elizabeth begrudgingly heeds the advice of her closest advisers who advise her to reconsider marriage when her rule is continually threatened by radical Catholics, and at the beginning of the movie we see her stare on in abstemious bafflement at a line of would-be royal suitors who have traveled from far-away places to persuade the self-named Virgin Queen into a politically-secure marriage.

Enter Sir Walter Raleigh (Clive Owen), a pirate who has returned to England after finishing an expedition in the New World and naming one of its territories after his beloved queen (Virginia). Raleigh is frowned upon by members of Elizabeth’s court, who dismiss his gifts as acts of thievery and his stories as little more than dramatizations, but the red-haired monarch nonetheless is fascinated greatly by his chutzpah. His charm is irresistible, his way with words enticing. She is amused by his chutzpah. What are his motivations? The story spends much time wondering but never really settles on a reason. Perhaps he is simply wooing her for the benefit of garnering funds for further expeditions. Perhaps he really is infatuated with her. Or perhaps he is simply engaging in romantic parley simply for the sake of being able to say that he, a common man, was able to turn the head of a virgin monarch. In any case, Elizabeth herself considers the points at hand as little more than side details, and dispatches her closest lady-in-waiting, Beth Throckmorton (Abbie Cornish) to learn more about the fetching Raleigh, even though Beth herself is rather infatuated with the gentleman.

In the midst of all these brief allusions of romanticism, the movie attempts to get political, as we expect it to. Through the intricate spy network set up by the queen’s most trusted adviser, Sir Francis Walsingham (Geoffrey Rush), a plot involving the invasion of Spain to assassinate Elizabeth and replace her with her fervent Catholic cousin, Mary Stewart (Samantha Morton), is discovered. The extents of this plot reach perhaps far greater and closer than the advisers to the queen initially realize, though, and in one crucial turning point of the movie, she is staring down the barrel of a gun being flung around by a would-be assassin. The lead-up to a war lies not in the notion that Spain may or may not be exclusively behind the plot, but in the notion that, since the court expects them to be, they order the execution of Mary Stewart. Because Phillip sees the imprisoned Queen of Scots as a servant of God, her death is ample reason to march against Protestant England as a result, and the Armada takes to the seas.

Much of this sounds much more exciting than it really is on-screen, however. Perhaps the problem lies in the visual; the splendor of the special effects, the cinematography and the set design are so grandiose that they allow major plot details and directions to come off as nothing more than narrative smudges. It is rather difficult to determine exactly what the motivation is for this screenplay, though; William Nicholson and Michael Hirst, who at least seem to grasp a foundation for their material, seem so bewildered by their task of producing a multi-faceted story that they simply skirt the issue entirely and give us broad strokes. This is a jarring contrast to the content of the movie’s predecessor, which matched stirring texture with equally-stimulating narrative flair and character development. Here, substance seems much more elusive and one-dimensional than it needs to be; characters are reduced to shells of their former selves, plot twists are delivered without much forethought or reason, and concepts plod along as if they have some eventual purpose, although they never really do other than to fill screen time.

The one constant in all of this is the on-screen synergy shared between Cate Blanchett and Geoffrey Rush, both of whom are returning to their roles here, as political and social equals who exchange banter, offer and listen to advice, and co-exist with a mutual admiration that is just as infectious and observant now as it was back then. Walsingham, ever a teacher of the political game, continues to instruct his queen on the importance of protecting her safety and reputation amongst a population of people with hidden religious agendas, and she herself has no qualms in exhibiting the discomfort and frustration she experiences at constantly being told that she has to behave and act in accordance with those dangers. Additionally, the scenes involving Elizabeth away from public eyes, in which her servants strip her of her elaborate costume and hair pieces, have a certain intimacy to them that I greatly admired; direct and natural, they reflect an attitude seen in great strokes by the director years before, when he saw his Queen Elizabeth not as an object but as a human who is surveying her world in attempts to transcend it. Here, he surrounds the same motivated figure in a canvas that is astonishingly beautiful and elaborate, but no longer does he see the woman in the front of it as the foreground. Here is a monarch that puts up quite a fight in competing with visuals, but one that is too imprudent to become the center.