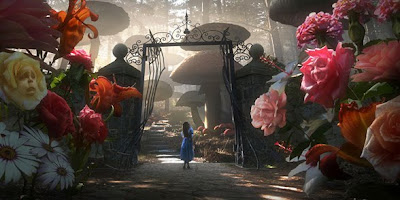 An outlandish world plagues the dreams of young Alice Kingsley during the early scenes of “Alice in Wonderland,” in which she finds herself thrust down a giant hole and into a realm where rabbits wear waist-coats and carry pocket watches, smiling cats can evaporate into thin air, and social gatherings involve tea parties in which guests recite bizarre riddles like, “Why is a Raven like a writing desk?” Poor doesn’t know what to think of the ideas that take root in her subconscious, often awkwardly exploding into nonsensical rhetoric when her elders attempt to keep her focused on reality and customs. “Have I gone mad?”, she asks her concerned father during an opening scene. “I’m afraid so. You’re entirely bonkers,” he chimes in. “But I'll tell you a secret. All the best people are.”

We gather a similar conversation must have happened between Tim Burton and his own father, otherwise he might have never acquired the chutzpah to take the absurd approaches that he has in his own movies over the past twenty years. To describe a endeavor is not to do it justice, either – often abstract in configuration and seeped in gothic influence, his movies seem to reach beyond the celluloid and seek solace in the foreboding, leaving viewers enraptured by the sharp edges and the deep ironies in his stories. The approach worked greatly in his favor for a handful of films, including “Sleepy Hollow,” a film with all the flair and style of one of the great Germanic expressionism pieces of the silent era. Alas, in the recent years, that sense of style became a liability in his work, and often the visuals would be elaborate distractions from screenplays that lacked a challenging venture. Even “Sweeney Todd,” the director’s biggest critical hit to date, was little more than a collection of predictable sequences involving revenge, irony or eccentric characterizations set to Stephen Sondheim music. Being different is a path of great distinction, but when it is exhausted, often it can become just another formula.

And yet these core qualities are exactly what make the ideal director of Lewis Carroll’s zany novels. No one else could take so direct an approach as he when adapting the material to the big screen without sacrificing something imperative in the process; like his own films, the books exist as if written in a vacuum, unconfined to the structures of standard narratives and unwavering in their attempts to represent the purity of an uncultivated imagination. The basic difference, of course, is that once knew how to tell an involving story, whereas Carroll’s books are basically collections of illogical passages that lack direction and tenacity. If the core audience has the energy to make sense of the material, more power to them. Speaking from personal experience, attempts at making some plausible sense of the mystery are almost as infuriating as the mystery itself, and once its all over, you remember all the characters so distinctively that it’s almost an insult that they are used in a narrative that refuses to engage them in thoughtful (if crazy) storytelling. It seems to exist just for curiosity’s sake.

Burton does not make a direct adaptation of the material, thankfully; instead, he opts to age his heroine to her mid-teens, place her in a plot situation that grants credence to the existence of her dream world, and makes modifications to Wonderland itself that allow its story to be about actual people and conflicts rather than puzzles meant to mystify the protagonist. Unfortunately, the filmmakers are no closer to fully understanding this material than Carroll himself was. The movie may be a triumph of technical design and visual ideas, and the screenplay provides the characters with new touches that keep the ideas consistent with today’s movie fantasy, but ultimately, any improvements done to the source material are momentary. Once the lights have gone up, no one is any closer to understanding the appeal – or the objective – of all that transpires in this or any other Wonderland. But of course, at this point, maybe we can expect no more.

In this one, at least, we are guaranteed some unique interpretations, and the best of the lot, I think, is the portrayal of the Mad Hatter (Johnny Depp), who is a bit more insane than we remember him from the original stories. That may or may not have something to do with the fact that his superior, the lovely White Queen (Anne Hathaway) was pushed into exile by her jealous and cruel sister (Helena Bonham-Carter), and Wonderland as a result has fragmented into a realm where insanity is no longer the cheery trait so many embrace, but rather a handicap. The Hatter almost seem self-aware of his underlying eccentricity, and at one point of the movie stares back at Alice as if she isn’t the only one who wishes she was in a less nonsensical place.

The movie takes great liberty to play with the characterizations. The Cheshire cat is quirkier and friendlier than normal and disappears into thin air as if made up of mist. The Red Queen is an abnormal Napoleon-esque tyrant who keeps company only with those that fear her wrath. The Knave of Hearts (Crispin Glover) is a power-hungry opportunist that will swing whatever way the crown falls. Tweedle-Dee and Tweedle-Dum are pudgy little boys who are agreeable only on wardrobe choices. The Caterpillar is smarmy and arrogant and puffs on his hookah like it were a third lung. And the Doormouse is feministic and fearless, and at one point leaps onto the back of a Bandersnatch and plucks out its right eye with a sewing pin.

Less fearless, perhaps, is the screenwriter Linda Woolverton, who opts to close the movie with an action sequence that involves Alice doing battle with the fearsome Jabberwock in order to settle Wonderland’s power dispute between the sister monarchs. We can’t honestly blame her; where, after all, does a story like this need to go? What remains once the characters are in place and the conflict is finally at the center of the crosshairs? To take the venture further into the unknown would be to veer too far from the groundwork – a prospect that is appealing, yes, but one that neither director nor screenwriter are willing to make. Their movie is seeped in distinctive visuals, lavish photography and set design that recalls the wondrous texture of “Harry Potter.” What, then, held them back on taking further creative opportunities with the story? As it stands, their minor amendments do only enough to generate something mildly enjoyable – serviceable for a story that needed improvements in the first place, and passable for a director who has felt misguided in recent times. Still, had they gone beyond the constraints of the name value of this story and opted for a full departure, who knows what they would have been capable of?


Fantasy (US); 2010; Rated PG for fantasy action/violence involving scary images and situations, and for a smoking caterpillar; Running Time: 108 Minutes