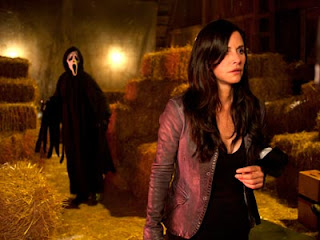 The characters of “Scream 4” have the same audacious self-awareness of those in the earlier pictures, but with modern conveniences. Social networking sites allow news of death and mayhem to spread quicker than the police will allow. Portable cameras capture an endless supply of graphic footage from a murderer’s point of view that can be instantly streamed worldwide. And, naturally, the evolution of phone technology means that if the creepy ghost-face killers don’t want to call up a victim and threaten them, they could always just send a text instead.

The key to the movie’s relevance is an evolved version of what has been key to the franchise as a whole, which is to allow mayhem and hysteria to ensue without allowing it to upstage the characters or their pointed observations. This is not just refreshing, but also rather pleasantly surprising; writer Kevin Williamson and director Wes Craven – perhaps best when they are collaborating with each other in the first place – have gone against an age-old standard of long-running movie franchises running out of steam by crafting a solid, driven and well-packaged endeavor that also acts as a middle finger to the state of its parent genre. Long ago did the people in horror films with above average intelligence cease showing up; “Scream 4” plays like a trip to their compound.

Further incentive to see the movie stems from the return of the series’ important players. This time, Sidney Prescott (Neve Campbell), the core survivor of three waves of deadly murders, is back in Woodsboro promoting a self-help book she has just released, a move that coincides with the anniversary of the first set of killings she witnessed. Simultaneously, a new double murder has just taken place in town, this time on two teenage girls who, like previous victims, were harassed and abused verbally by a creepy stalker voice on a phone before being mutilated from multiple stab wounds. This event triggers not just traditional panic in the faces of the town’s citizens, but also a feeling of déjà vu. The teenagers almost seem detached from their situation, as if they’re merely outside looking in on another chapter in a tired slasher franchise. But can you blame them? Hollywood has made six sequels to “Stab,” the movie based on the Woodsboro Murders, and numerous remakes to older (and better) films have so desensitized them to reality that they barely seem present even during their own slashings. This is not accidental on Craven or Williamson’s part, either. Teenagers who watch horror movies in the now are genuinely like this.

For the three lone survivors of the first trilogy, the new wave of killings inspires, perhaps more than anything else, a silent impulse to step back into a position that has become more comfortable to them than it should be. Gale Weathers (Courtney Cox), by leading example, has had difficulty functioning in the years since her run-ins with masked maniacs; sitting quietly behind a desk with a blank document for days on end, she finds herself devoid of creative or professional inspiration unless there is some kind of homicide going on around her. Indirectly it also impacts her husband Dewey, now the Sheriff of Woodsboro; relatively commonplace as a law figure, his endeavors are a distinct contrast to how he behaves in situations involving spilled blood. You’d think poor Sidney would be of the opposite ideal since she is one of the fundamental links to this entire massacre, but no such luck. There is a moment when Ms. Prescott willingly runs into the house of a murder victim while the killing is taking place, an action that is indicative of the inner strength she has found in herself after so much time dealing with the grief and loss of her loved ones. Us ordinary people would have probably fled for dear life at the mere mention of homicide after witnessing – and surviving – three extensive rounds of it, but hey, we’re obviously not the type meant to be in a Kevin Williamson screenplay, right?

The movie will probably be a shock to newer audiences, who won’t be nearly as sure of accuracy when doing the guesswork on who dies and who the killer really is. Williamson’s strength is not necessarily in originality, of course, but in the clever dialogue that is used to strategically throw viewers off the scent. This presents a good challenge to newbies, while us seasoned veterans will have less difficulty because the formula is now familiar to us (I don’t have shame in admitting that there were times I even found myself predicting potential one-liners before they were actually delivered). The film does still come with a few unforeseen tricks up its sleeve in either case, and I was particularly thrilled with the fact that the climax did not play out as I had expected it might. Movies that utilize false resolutions to throw its viewers off of a trail often do so at the expense of logic or plausibility, but “Scream 4” executes the effect to great results. By the end, I was genuinely surprised, bewildered and yet satisfied by how the events unfolded.

Who lives and who dies are not plot points I care to reveal, for the central point in “Scream 4,” I believe, is that it no longer matters as long as the people involved use their brains to enhance the journey. It’s funny, in a way, to think about what a town hall meeting in this community might have been like in the in-between years, or what might be said at public gatherings by residents who were around to bear witness to both waves of murder. If they are anything like the psychotic children they raise, their observations would no doubt make for stimulating dinner conversation. It must, after all, be so thought-provoking for a town like Woodsboro to find notoriety in the fact that smart teenagers who watched countless horror movies were capable of so much macabre over a few short years.