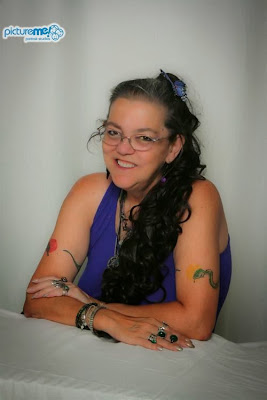 The point is she had an opinion, fully shaped by the crazy life she played a part in, and it was ours to learn from. Some people exist in our lives to be lightning rods, and expand our awareness. I discovered this early on in our first interactions together, which began in the fall of 2008. Hers was a world that I cautiously wandered into out of association; I was allured by someone at the time who identified as Pagan, and she was the gravity at the center of his universe (a “witch” of her craft, she admitted). Countless others, all one with metaphysical studies, orbited her influence too, and it inspired certain wonderment. What was her allure? Her influence? Like Alice Walker in “The Color Purple,” she seemed to permeate an energy and history that was attractive to a collection of young souls trying to find their place in the world. I thought I knew everything about myself at 27, but a few minutes with her suggested just how astray I was.

For Sharon, everything was about magic. The universe around us all vibrated with an energy that ebbed and flowed like the hands of time. Everything had a purpose, to either teach or inspire. Negative emotions were an invitation to shadows, but sometimes they had to be faced with unflinching honesty. When I was in a particular dark place in early 2011, her words were like being hit with a ton of bricks. But someone had to say them, and to her, the most direct route was the most beneficial: a paralyzing moment of pain was easier to learn from than a series of small aches. I did not always understand her methods, but so many of us often dismiss others because we don’t identify with their approach. If I had done the same, I can’t help but feel I would have lost a critical insight in my own evolution.

Her life wasn’t always chocolates and roses. Family life was tumultuous, I gather, for a good duration of her upbringing; relatives that lived close by only seemed to appear out of etiquette. Her friends were not so much an extension of her family as they were the core, no doubt because wisdom and experience taught her (like most of us) that friends are often more loyal than anyone. When “the circle” (as it were referred to as) disbanded in 2009 and people went their own separate ways, some of those friends dismissed her on the basis of gossip or projection. She was incredibly hurt by some of it, and for valid reasons – when someone lives life out in the open and is clear about who exactly they are from the very beginning, who is really at fault when things don’t work out: the person who was true to themselves, or the one who fell under the ruse of a self-made illusion?

Yet the good lady would ask that none, including me, dwell on those negatives for too long: there was no point to, because life was about the positives, about the present, and about the unconditional love shared between each other. As clouds loomed around her, the smile and sense of humor remained intact, even as it seemed laced in uncertainty. When she broke news earlier this year of a cancer diagnosis, there were moments of panic and depression all around. But she stayed optimistic and committed to the fight for as long as she could, and hoped her core friends would do the same. I refused to look at her as a fragile shell in those last months, because that’s what she needed – people who were not always anticipating her to wither away. I held steady with that conviction as long as I could, but last night during our final visit together, I was shaken by how quickly the illness had progressed in a manner of a couple weeks. “Your passion for life astounded me,” I told her. “Thank you for your heart and soul, and for teaching me more about life than I knew was out there.” In between labored breaths, she managed to smile at me, and we exchanged a tearful goodbye.

Sharon died early this afternoon in the company of friends and family, who rallied around her like the bright star that she was. She deserved no less, and her spiritual energy continues to move through us like guiding influences through this crazy journey of mortality. I always didn’t believe in the concept of “magic,” but her timely loss is simply too ironic to be coincidental. Leave it to a witch I guess to leave this world and enter the next on the day of the dead.

Goodbye for now lovely lady. You are missed and loved.