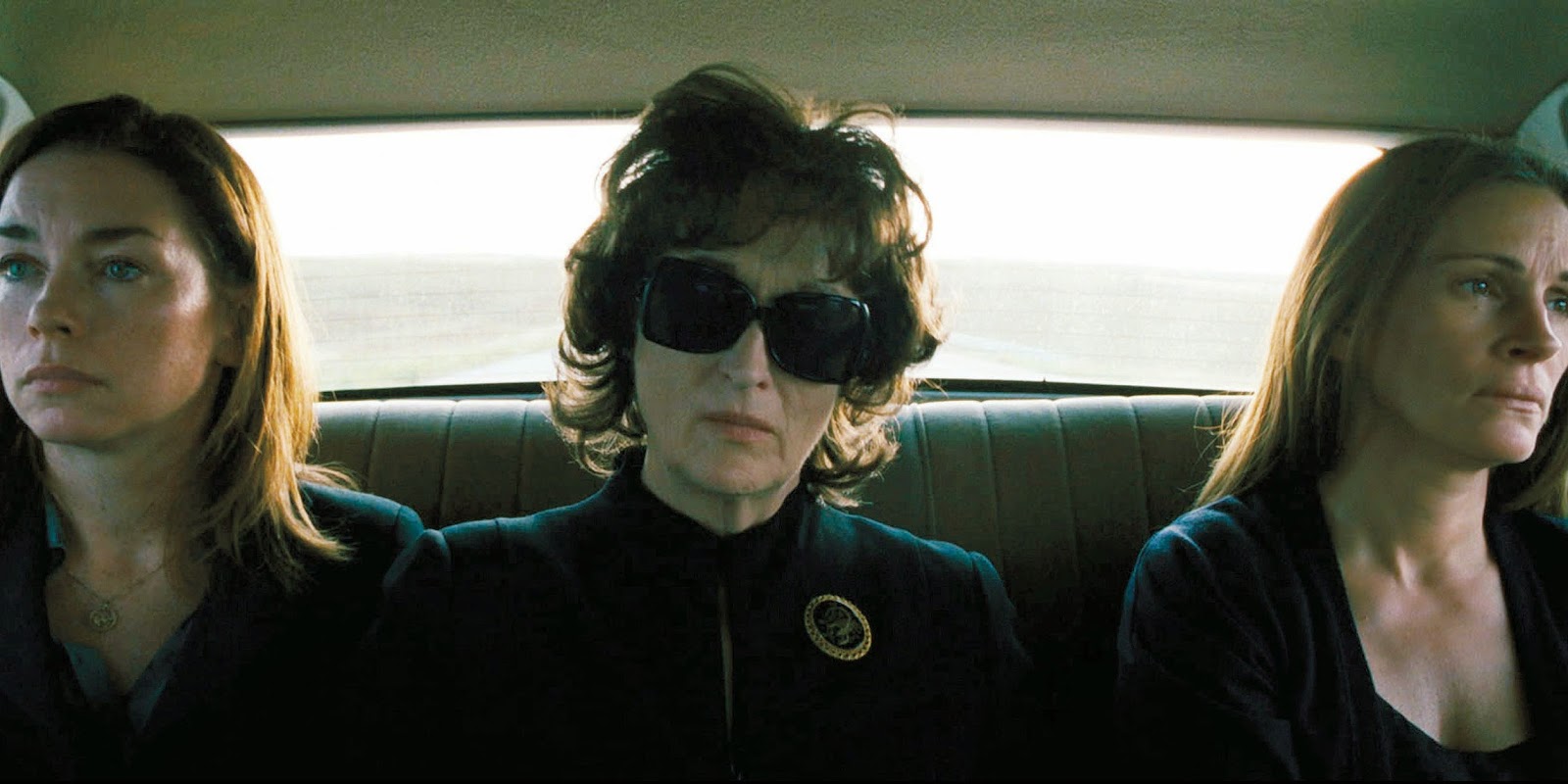 It is easy to grow weary of these stories. Families ripe with dysfunction are the perennial facet of dramatic storytelling, and with the evolving overexposure of time their dilemmas often surpass the breakpoint of plausibility. But “August: Osage County” finds powerful relevance through its grotesque details. Here is a movie that, in the span of two incessantly watchable hours, manages to deal with the subjects of abuse, alcoholism, racism, infidelity, drug addiction, illness, pedophilia and even incest. And yet it doesn’t so much use them to shock as it does to reveal wounds that inspire impeccable performances and piercing dialogue. Our mouths are left agape over the course of these tragic and horrific conflicts, but we watch on with constant fascination and perplexity, uncertain if there is more to the story but cautious that added reveals may surpass the audacity of others.

The movie’s insight begins pointedly with opening dialogue: “Life is very long,” a line originally spoken, we are told, by the great T.S. Elliot. Its significance is particularly important to the very person who first emphasizes it: Beverly Weston (Sam Shephard), a poet and husband on the planes of Oklahoma whose marriage to a sickly woman (Streep) has left obvious mental scars. She takes pills, he drinks; their addictions play like clauses in a contract of a toxic marriage. Their poisonous exchanges, briefly glimpsed in the opening scenes, seem to suggest we are in the final throws of their ordeal, and they do not go unnoticed by the newly hired housekeeper Johnna (Misty Upham), who passes through most of the movie as neutral eyes and ears, always observing without interference. Johnna’s presence recalls (perhaps accidentally) the devoted housekeeper of Ingmar Bergman’s “Cries and Whispers,” if only to bring the material to the same key realization: as the emotional capacities of others continue to wither and evaporate from within a troubled family, sometimes all that remains empathetic is the one stalwart enough to remain committed to the cause of care and nurturing, even if none around her are deserving of such sensations.

Off-screen, Beverly drives off into the wilderness and is presumed missing. This inspires Violet’s daughter Ivy (Julianne Nicholson), the only sibling of three sisters who remained local to care for her parents, to summon others back to Oklahoma for guidance. Two more daughters appear: Karen (Juliette Lewis), a neurotic sort who approaches others as if possessed by the Stepford gene, and Barbara (Julia Roberts), the oldest of the three, whose honesty and cynicism run so thick that they reveal the family’s core problems almost unintentionally. Also gathered around Violet in her moment of uncertainty: Mattie Fae (Margo Martindale), her devoted sister; Charlie (Chris Cooper), Mattie’s passive husband; Steve (Dermot Mulroney), Karen’s fiancée; Bill (Ewan McGregor), Barbara’s estranged husband; Jean (Abigail Breslin), their observant daughter; and “Little Charles” (Benedict Crumberbatch), the son of Mattie Fae and Charlie, who tiptoes through his scenes like a farm animal nervously waiting for the cattle prod. Their histories come to the surface as if participats in an impromptu family reunion, but when Beverly is discovered dead in the nearby lake, the respectable gathering quickly and rapidly dissolves into hostile mourning as they struggle to find meaning in the events. Assuming, of course, there is a meaning at all.

Their uncertainty forces them to turn on one another like rats that have been separated from a food source. The film’s centerpiece is a twenty minute sequence exposing that reality: at a funeral dinner where all the Westons have gathered, idle chit chat and exchanges of memories are intercut with harsh and often cruel observations, mostly from the heavily medicated Violet. A scene of this nature would be easy to ham up in the hands of actors working overtime as scene stealers, but the performances are extremely synergetic. Streep in particular is effective – she gives Violet scarcely a shred of dignity, and plays on that facet to extremely thoughtful heights – and Roberts is near perfect in a role that demands little restraint in the face of endless button-pushing. Their dramatic intensity, meanwhile, is contrasted effectively in the sublime performances of Chris Cooper and Julianne Nicholson, both of whom remain ambivalent to the commotion until the moment calls for them to speak up, usually at the defense of others.

The movie is not funny, contrary to the somewhat misleading promotional campaign might have you believing. But I don’t think it was ever written that way. Although we sometimes smirk and chuckle based on audacious timing, there is nothing humorous or comical about what these characters go through, and the pain they inflict on one another is extremely serious. Tracy Letts’ script, based on the stage play he also wrote, is popular in drama circles because of how thoroughly fiery the characterizations are, but it also takes certain heat from critics because of the degree to which all the shocking twists are conveyed (the term “soap opera” has been applied in several descriptions). My feeling is that a story warrants its extremes based on the foundations they lay, and “August: Osage County” creates a world so enveloped in life-long despair that its revelations, even down to the last shocking disclosure, all connect harmoniously to the premise. Towards the end of the film, one nearby audience member observed that watching these characters was the equivalent of seeing the southern belles of “Steel Magnolias” exchange dialogue under the influence of Tourette’s syndrome. Yes, and if someone had replaced Truvy’s beauty salon with a recovery center for substance addicts.

Drama/Tragedy (US); 2013; Rated R for language including sexual references, and for drug material; Running Time: 121 Minutes