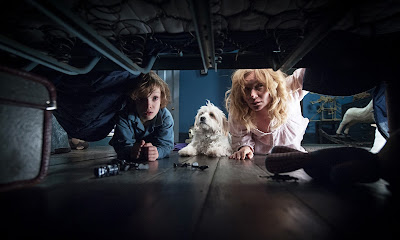 “The Babadook” is a work of implicit realizations, of painful memories that rise to the surface when two wounded souls encounter a malevolent force lurking in the shadows of their home, and attempt to disarm it without understanding its underlying nature. Why has it drifted out of obscurity to stalk them? Most urban lore suggests that such beings exist because they feed on the negative emotions of others. It is the requirement of this plot, therefore, to tether the entity to those who represent the extremes of that value. Consider the deadened demeanor of Amelia (Essie Davis), who occupies space as a withdrawn woman incapable of escaping self-imposed isolation. That reality comes from a distant memory: the moment when, on the way to the hospital to deliver her son, her loving husband was killed while driving their car. She survived the crash, and so did the unborn son; years later, there is an indifference in her to the possibility of moving on, and her heart is frozen in a stasis of unending grief. Adding to that tragic implication is the personality of her son, whose wide traumatic eyes and shrill voice are the outlet for a very vivid imagination that believes ghosts and demons are always lurking under the bed. Watching him, one can only imagine what fate has in store for his adult years.

But poor little Samuel (Noah Wiseman) may be onto something. Who is to say that midnight bedtime stories about ferocious beings, after all, are easily dismissed? Is it possible that they come about because their writers have experienced them first-hand? That seems to be the unspoken claim of this highly distraught young fellow, who seldom sleeps, is always caught in a state of outburst and allows his extensive daydreaming to inform nearly every impulse he possesses (including on the school playground and at neighborhood kid birthday parties, where he is often reprimanded for scaring or injuring his peers). His mother, a withdrawn and emotionless wreck, is reprimanded for his behavior and shunned from social gatherings. She grows to resent him. And then after who knows how many sleepless nights of coddling his wild imagination to the point of exhaustion, she stumbles upon a book on the shelf ominously labelled “The Babadook” and reluctantly reads it to him, which does nothing to curb his already-flamboyant sense of paranoia.

Unfortunately for her, this is also no ordinary ghost story. The very pages of the book seem to permeate negative energy (you can always predict the inevitability by a movie’s soundtrack, especially when it involves a series of low rumbling pitches intercut with shrill thuds). The creature foretold inside – a shadowy form that devours the souls of young frightened children – is so nightmarish in scope that he far exceeds the notions of simple boogeymen, and the story’s very descriptive passages seem to act as a direct threat. Little Samuel is driven to such fright by the impending warnings of this fictional beast that he takes on the persona of household protector (a warrior of bad dreams, if you will), and spends nearly every waking moment learning how to handle weapons and setting up elaborate traps in the house as a way of combatting the arrival of this new sinister entity. While that does not do much to curb the cynicism of his already-impatient mother, alas (the depth of her resentment is often revealed in very cruel and abusive monologues), inevitably her mind is swayed over to suspect something deeper going on. And then when there is a moment that she attempts to burn the book in order to remove it from her awareness, it shows up the next day on her doorstep as if implicating its undeniable presence (or, at bare minimum, her unravelling sanity).

The movie’s villain is an abstract creation of tremendous dread, a figure of darkness and mystery whose grotesque facial structure – only revealed in illustration – rests comfortably beneath the shadow of a large hat, as if a stranger hoping to lure its victims into a shroud of intrigue. As the movie progresses, its figure appears to shift and expand like a cloud of confusion, like a shadow that gets projected onto walls by a lamp that never stays still. What is it there for? Why does it persist so diligently through hallways and rooms, preying on the insecurities of its two victims before ultimately trying to consume them? More conclusive (but less experimental) films would arrive in a place where all must be resolved with decisive answers. But “The Babadook” does not desire such finality. We absorb only what we can: vague suggestions that are overwhelmed in moment after moment of horror, each progressing for greater benefits than just momentary shocks or jolts. What director Jennifer Kent has succeeded in doing, above all else, is creating a movie monster for the times – one in which the lack of details only fuels its inevitable path of destruction, and intensifies the possibilities of all probably outcomes.

The ultimate key to the film is in its uncertainty: is there really a menacing figure that is trying to devour these two souls caught in eternal anguish, or is it a projection based on the ambiguous mental states of its observers? Because the movie does not reach a point of conclusion until the final moments of the resolution, everything up to that point is enlivened by dual functionality. The screenplay houses the psychological implications of its characters with such effective rhythm and focus that we are totally absorbed in their tragedy; when they act out, we sense immediately that it is a reflection of what they have endured, and will likely never find an escape from. By the same token, the more supernatural moments of the picture are so effective at establishing tension and plausibility that they are genuinely scary, even when the Babadook itself is not directly on-screen. And in the tradition of the more memorable creature-oriented horror films, here is a movie that takes the most patient road: the path in which we are given details in gradual increments so that our nerves our undermined well enough to succumb to the inevitability of an outlandish confrontation. At that point, the climax isn’t just a momentary sensation, but a culmination of an hour’s worth of brooding, silent tension and unravelling human psyches.

Most will approach the movie as dead-on horror with psychological contexts, but I think that creates a hypocritical implication. A great many scary things happen to this mother and son – much of it with great emphasis – but the entire crux of their problem is that they are emotionally eroded after so many years of co-existing in a grief-oriented bond. Metaphorically, the arrival of a menacing shadow is just the next step in their tragedy. That the film puts such heavy weight on their frightful exchanges certainly lends credence to the classification, naturally; it is all very effective and fearsome, even to the most fluent of horror buffs. But it arrives at that peak of engagement because these things happen to real people rather than just flesh objects waiting to be slaughtered, and their situations come from a relatable subtext that floods the screen with a downtrodden energy long before the monsters arrive to amp it all up. “The Babadook” is indeed a very good horror film, and yet much more than that: a stirring little piece of psychological drama in which all the optimism and joyful human interactions have been stripped away, leaving behind only the negative extremes.