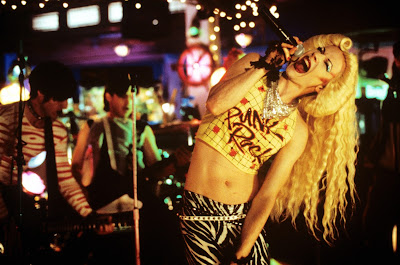 Perhaps it is just a cruel irony that drag queens and transsexuals, often reduced to caricatures and sneered at by mainstream society, adopt makeup patterns that allow them to appear so lively. Under the elaborate image of sharp eyebrows, heavy eye-liner and broad smears of lipstick and rouge, the face often hides melancholy; they are usually carrying the sorts of secrets that can only be escaped by acting out, usually in theatrical impulses or with biting sarcasm. That is not necessarily the absolute truth when it comes to their presence in queer culture, but it is surely the most prominent running theme of John Cameron Mitchell’s “Hedwig and the Angry Inch.” To contemplate that prospect is to open a gate in which we can begin to understand the fractured mental state of the hero, a man who has endured harsh pain and betrayal at the hands of treasured loved ones, and yet wanders into his nightly performances with frontal ambivalence; he is going to sing his heart out, tell stories and always do so with flamboyant gusto. Behind the scenes, unfortunately, very little of that carries over, and in an existence that is made miniscule by negative public perceptions, a thorough portrait emerges that is sad, haunting, dynamic and even rousing. We are not just experiencing the life of a person here; we are embodying his agony like friends in powerless observation.

Traces of these realities have come and gone in the peripheral of mainstream movie plots over the years, but “Hedwig and the Angry Inch” is the most direct of those realizations, a heartbreaking character study that does a tricky balancing act of sentiment, provoking a wide array of conflicting emotions without implausible plot manipulations or shameless contrivance showing the way. Much of that comes from a vision that is as supportive as it is outspoken; the director sees no point in mincing words for the sake of watered down storytelling, and he forces his audience to experience all the emotional turmoil that the lead character is required to endure. Sometimes that involves joy and promise, other times immense suffering. And at the epicenter of that dichotomous structure of feelings is an engaging soundtrack of rock anthems guiding us through the story, most of which color the issues with cheeky sensibility without negating their impact. Most movie musicals often use songs to create an exaggerated exterior of polished images, but here is one that uses them to reveal honesty that seems too painful to explain in mere conversation.

The story of Hedwig is one of sacrifice and battle scars. Mitchell, the ambitious director, plays the title role here, a man who adopts the persona of a transsexual lead singer of the band Hedwig and the Angry Inch – not entirely because it’s part of performance art, but because it’s the skin its creator feels the most comfortable in. Much of that is established in a few of the early sequences, where the protagonist regales her tiny audiences – usually in small diners or dive bars – with stories of his awkward upbringing. Born in East Berlin well before the wall fell, “Little Hans” was a child of circumscribed value living in a tiny apartment with his carless mother, where things were so cramped that “mother made me play in the oven.” His accounts – usually told as lead-ins to his songs – do not always offer validation of suffering, but that’s part of the scheme; a good music artist is also a storyteller, usually sugar-coating his own memories in order to acquire the interest of stoic onlookers. But as we observe them in the context of the more downtrodden stories that go on in the present off-stage, one wagers that it is all part of a cycle with very early origins, and that adds secondary insight to the more flashy moments occurring on-stage.

Hedwig’s lonely and bitter existence comes down to two life-altering experiences: the loss of his genitals to surgery during an attempt to immigrate from Germany to America as a woman, and the theft of her back catalogue of rock songs to a former lover, who has gone on to turn them into the benchmark of a more prosperous career in the music industry. Tommy Gnosis (Michael Pitt), a hot commodity in concert arenas and record stores, was once just a lowly teenager enamored with the enigmatic Hedwig, and the fallout they had during an awkward moment of passion was the catalyst in which his theft of the songs turned the songwriter into a figure of perseverance. Why exactly does she and her eccentric band play in lowly locales like buffet restaurants? Usually, they coincide to locations that Gnosis and his band are currently performing, and Hedwig frequently sticks her head through an exit door to shout insistence accusations into the air, because that’s as close as security will ever allow her to get to her thief.

The details progress with linear yarns that are accompanied by songs of progressive depth, all while Hedwig and her bandmates (most notably the sensitive Yitzhak) engage in an act of mutual tolerance that seems more forced than any of the performance pieces. As exposition, the material must present no immediate relief so that it can bring its wounded star to the absolute lowest of depths just before she is offered a key moment of redemption. Some movies might have never offered such a respite, but this movie has added motives. When justice prevails in a climax where Hedwig is offered some level of credibility, she doesn’t know how to react. Should she be grateful? Does she embrace the newfound respect? Here is a creature that has lived so long in the despair of her own existence that she simply has no idea how to fathom the offer for relief. Torment and humor are the tools which she has functioned in every one of the lives she has led, and sometimes a new sensation – however meaningful – is too shocking to be embraced, even in this context.

The inevitable knee-jerk response to this scenario is why this wronged song poet didn’t simply pursue legal action against Gnosis for plagiarism; wouldn’t that have saved so much trouble and heartbreak right from the start? That is a question more often asked by someone who has forgotten the context of the world in which Hedwig, a transsexual, lives in – who would see the claim as legitimate, really? Mitchell’s underlying thought process is not to recite the rhetoric of protest against inequality, but it does persist just beyond the borders of his core intentions. The truest values, though, are in the marriage of good music and resonating feeling, brought to crescendo in a performance so sincere in its painful delivery that we wonder how anyone could look so deeply into something so fictional and find anything so pure. But this is not an actor or director who messes around with material he barely comprehends, either. “Hedwig and the Angry Inch” began its life as an off-Broadway production in the late 90s (with Mitchell performing it the entire time), and once it was ready to be made into this movie, it had already birthed an expert in the material who was perceptive enough to create a plausible space for this sad tale to be delivered in.

The most remarkable of those realities is that Mitchell has directed three pictures, and seems to progress higher into the sphere of effective film composition with each passing endeavor. His follow-up to “Hedwig,” the audacious “Shortbus,” was revealing and shocking all while taking its detailed sexual content out of a pornographic context. After that he made “Rabbit Hole,” one of the saddest and most unforgettable family tragedies of the last decade. There are no other three movies that could be so different from one another, and yet combined they suggest the thumbprint of a keen voice that refuses to diminish or romanticize any frontal intentions. As I saw this film again for the first time in almost ten years, I was reminded not just of how far he had come, but also of how insightful he was from the first moment he found his way behind the movie camera. This is a man who had something very important to say. Furthermore, few filmmakers (even now) ever contemplate such a story so thoroughly, or with such painstaking empathy. “Hedwig and the Angry Inch” is the heartbreaking projection of a man who understands exactly what it’s like to be chastised for being different, and as a vehicle of social insight it discovers the purest stroke of compassion one could offer to its conflicted hero, all while filling our head with catchy songs and rich characterizations.