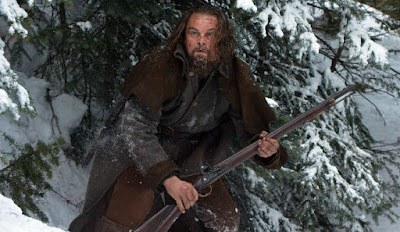 Alejandro Gonzalez Inarritu’s “The Revenant,” a picture about these themes, is one of the most challenging and difficult experiences I have ever had going to the movies – a harrowing excursion through a hell that is visualized in the kind of implicit detail generally reserved for showy horror vehicles. While it is true that it merits similar considerations, this is not the sort of picture easily dismissed as some vulgar exercise, either. Based predominantly on source material penned by the great Michael Punke, cinema’s most stimulating modern director has channeled his unrelenting madness for the craft into material that matches his stirring audacity. This is not so much tale of revenge as it is a study of the most deplorable human qualities, all of which become unleashed as one man fights his way through great pain and suffering to grasp the entrails of his carnal instincts. What a shockingly visceral experience it is to watch, and how audacious of all those involved to participate in something so sobering.

The narrative is a modern consideration of the legend of Hugh Glass, a frontiersman in the 19th century who famously survived a bear attack, fought his way back from a certain demise and sought out revenge against those who left him for dead. The account is so well regarded, indeed, that it served as the basis for “Man in the Wilderness,” a well-known western from the early 70s starring Richard Harris and John Huston. Here, however, both filmmakers and actors have become far more willing to descend further into the nightmare of this story. The movie opens ominously on a quiet and damp morning somewhere in the great wilderness, where camps of rugged gun carriers rest, banter and await food following a successful acquisition of animal skins. From the distance comes the arrival of arrows. Piercing and fatal, they are ominous warnings from those that hope to leave the scene drenched in blood. The men in Captain Henry’s troupe are not quick-witted enough to counter the offense with respectable results, and only a handful of them are able to flee on a nearby boat before being overtaken by their attackers.

Two of them, Glass (Leonardo DiCaprio) and John Fitzgerald (Tom Hardy), are destined to become sworn enemies. Glass is a tempered sort with remarkable knowledge of the area, and Fitzgerald is a hotheaded motor-mouth with racist tendencies. That would not be a quality that sticks out in many films dealing with characters facing off against natives, but “The Revenant” supplies its hero a crucial detail: namely, that he is the father of a half-native son (Forrest Goodluck), who follows along on the expedition in cautious observation while others gaze back with suspicious gazes. His existence is contrasted by another young face named Bridger (Will Poulter), who wanders among the gun-toting mountaineers like a traumatized child seeking a moment of respite. Together they become symbols of a painful ascent into the nightmare known as adulthood: forever naïve, and tearfully oblivious to the personal fates destined to them.

There is a lot of tragic destiny at work in the movie, and much of it is mandated by a screenplay that has no desire to tread lightly on the details. At the center of that realization Glass, a hard-boiled man who attempts to lead his surviving team members back to the safety of a camp but is nearly killed in a bloody encounter with a large bear during the trek. Some look at his injuries and become convinced that he will die, even after he is sewn up and bandaged. Others find it fruitless to transport him towards civilization, even if they are hopeful he might make it. Three stay behind to keep a watchful eye over his wounds, but Fitzgerald’s impatient resolve alters the course of their assignment, and before long Glass is dropped into a shallow grave while still breathing, and the others take off with wrongful assumptions of his fate. As a pillar of selfish gestures, Hardy makes for a compelling movie villain – not at all focused on the conventional means of an antagonist, but driven by a much darker psychology than mere dialogue and behavior initially suggests.

The journey from that moment to the climax spares no feelings or brutal mental punches. Leonardo DiCaprio, who portrays Glass, finds a decisive tone to fuel the antics of his relentless persona; he is neither a victim nor a soldier of revenge, because each of those distinctions would cheapen what he is willing to go through these events in order to persevere. Some of what he does on screen also goes far beyond the dedication of more methodical actors. Shot almost entirely in the deep snowy wilderness of Canada, Inarritu reportedly required his lead to partake in rituals of grueling severity in order to evoke an authentic portrayal, including the act of eating the raw liver of a Bison (this despite DiCaprio being vegetarian). Countless others would dismiss the impulse as being unnecessary or overkill, but the actor’s dedication is indicative of how deeply he believes in this material. What we see on screen for those horrific 156 minutes is a face lost in the obsession of a challenge, and that gives the portrayal a very intense edge. No performance in 2015 has implied such difficulty, or been so plausible.

One of the movie’s other alarming strengths is the unvarnished scope. It does not portray the material through Hollywood lenses. It gets down and dirty. The cinematography by the great Emmanuel Lubezki (“Gravity,” “Children of Men”) takes almost sadistic delight in removing psychological distance between his audience and the characters. The movie is shot almost entirely in close-up, using only natural lighting; there is a sense watching it that the camera is playing the role of an eager vulture watching over men with ill-fated destinies, as if to sweep them away at the moment of their inevitable deaths. There are the extensive establishing shots too, showing us a world with such natural immensity that it evokes breathless wonder. When the movie must come to dealing with the most brutal battles and exchanges, it shockingly dances between perspectives (the opening sequence shows the point of view moving from one victim to the next on both sides of the battle, always staying close enough to experience the piercing of bullets and arrows). And the key sequence of the bear mauling is a work of paralyzing intensity; it seems to linger for the sake of destroying our fantasies of natural order, lest we carry them too far into a story that has no place for such ideals.

Then, of course, there are the dreams and hallucinations. As Glass is continuously haunted – or watched over, who knows? – on his journey by the ghost of his deceased wife, his mind is flooded by enigmatic whispers (“the wind cannot defeat a tree with strong roots”) and images of metaphorical suggestion. Many of those visual touches echo Andrei Tarkovsky, who was the master of such impulses; one of the key shots shows the lead character standing at the foot of a hill of animal carcasses is portrayed with the same murky contemplation. Their singular meaning may be simply transparent, but “The Revenant” is not obsessed with actualities. Events occur – both imaginary and literal – because they must erode the civilized nature of the hero. And just as he is driven to the brink of what is possible, we inherit the emotional toll of his endurance. There are times where I winced, cowered, and even gasped in despair. I was uncomfortable, but not in vein; these are real situations with resonating purpose, and never once does the film waver from an objective of philosophical stimulation. We learn just as much about ourselves watching it as we do about those enduring the details firsthand.

By overseeing this project, Inarritu, one of the most impassioned of modern filmmakers, now carries the elusive distinction of being the director of four 21st century masterpieces – this one, “Birdman,” “Babel” and “21 Grams,” each about characters caught in a destructive cycle with very narrow windows of relief. While his sensibilities as a provocateur of deep psychological narratives has always been consistent, never before has his reach extended to something this bleak, or this graphic; it’s as if his prior endeavors (particularly “Babel”) have been like elaborate rehearsals preparing him for this one moment, where he descends blissfully into the maw of merciless chaos. Of a very narrow selection of craftsmen who have found contentment in the duality of men unleashed in nature, only Werner Herzog is able to match that austerity. In many ways, what “The Revenant” implies is that its creator has transcended limited perceptions of what it takes to create an engrossing movie illusion. Everything occurring to his characters, to him (and to us) is soaked in truth. And by the end, long after Glass has endured a ringer of near-death encounters only to wind up in a resolution with no trace of finality, one gathers the cast and crew being far too scarred by the experience to celebrate its completion.