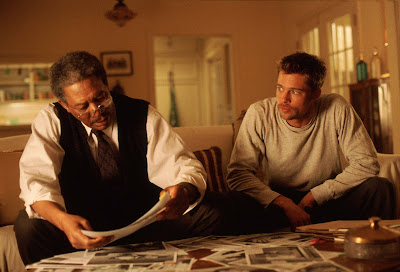 A general sense of the skill of homicidal villains certainly did not emerge from thin air. By 1995, audiences had already been inundated by the psychological ramifications of such scenarios in a host of notable newer films – including “The Silence of the Lambs,” a movie credited for revitalizing the perspective in the veneer of more modern wisdom. So why did “Seven,” above all others, leave behind such piercing echoes? The earliest reviews cited the skill of the direction as a prime selling point, but even they were only barely scratching the surface of Fincher’s creative thrust. There is a great amount of skill in how scenes flow into each other, yes, and the narrative structure is definitely well-versed in the delivery of captivating details. Yet they become minor points when one is to contemplate the subtle confidence of the actors and visual artists, all of whom are dabbling in waters where it would have been easy to surrender to the temptation of senseless gratuity. Here is a movie that arrived just as a populist genre began its notorious descent into the trenches of lurid fantasy, but used violence not so much to shock as is it did to peer into the far reaches of psychological thought with a great sense of intensity – something rather unexpected given the trashiness of the subject.

The title regards the number of deadly sins referenced in biblical texts, a series of cardinal curses that have become the framework fueling a series of grizzly killings – Gluttony, Greed, Sloth, Wrath, Pride, Lust and Envy. Though the setting is a city with an undisclosed name, all of the obligatory narrative staples – heavy crime, busy metropolitan streets populated by hard-boiled cops – suggest New York or Los Angeles as distinct possibilities. As the movie opens, Somerset (Freeman), a rookie who has grown weary of his profession, is paired with Detective Mills (Brad Pitt), a hotshot transfer with impulsive eagerness. Their union occurs on the onset of a discovery of a strange murder involving an obese man, whose hands and feed are found tied up while he is slumped over into a bowl of spaghetti. The clues stack to suggest that he ate himself to death, but but who would be so creative as to force such cruelty on a human being in this regard? The overreaching cause doesn’t come into view until additional murders emerge, all of them gratuitous and elaborate, where the words of the sins are left behind as signatures of the killer’s theatrical deeds.

The modus operandi spurs the detectives down the road of deeper research. What purpose is there in murdering others so viciously, but with such painstaking precision? Evidence correlates to findings made in books and research manuals, including Dante’s Divine Comedy and the Chaucer’s Canterbury Tales. Somerset isn’t so eager to be absorbed in the complexities of a case this elaborate (especially since he is so close to retirement), but the responsibility silently tugs at him while Mills stumbles aggressively through the procedural routine. Murders become linked by evidence shared between crime scenes. Homicides progress in the level of depravity. A portrait of a religious zealot as the primary suspect begins to emerge. And though victims aren’t so much connected to one another as they are united by the apparent wickedness of their nefarious indulgences, the killer choreographs an intricate web of puzzles that inevitably lead the detectives into the direction of added murders. Example: when the wife of a murdered lawyer is given crime scene photos to point out any irregularity in her husband’s office, her observation of an upside down painting leads to the discovery of a set of fingerprints, which in turn take authorities to an apartment where they expect to find a potential suspect, but in fact realize he has become yet another victim in this grotesque series of mayhem.

What separates a great thriller from a trashy one is, perhaps, all in the psychology of intention. Fincher is phenomenal in the way he leads his audience through this elaborate hedge maze of details, but the genius of “Seven” is that it takes pieces from every angle of consideration without burying them behind incessant violence; there is a sense that you are partaking in the investigation, sharing the chase in possible ambushes and riding along in the police car when the murderer unexpectedly turns himself in. A great many scenes occur within the walls of bloody crime scenes, but none of them are shot with deadpan scrutiny; they are vivid, yes, but they also become backdrops to the exchanges shared between the characters, many of whom have been so drastically desensitized that pools of blood seem to be just another mess for them to clean up. At one point Somerset summarizes his experience in one personal observation: “I don’t understand this place anymore.” What that emphasizes is a common feeling within their closed world that mimics ours: at the point when murder in the movies is abundant, does one really see that much difference from one victim to the next?

The movie makes great strides to create a distinct sensation in the same audience who shares Somerset’s cynicism. The cinematographer Darius Khondji (“Evita,” “The City of Lost Children”) adopts a painstaking depth of field in his images; there is a sense that he sees so much of the city through the lens that every iota of activity belongs there for the characters to walk past. The soundtrack is minimal, and perhaps rightfully so given the disquieting measure of the material. The screenplay by Andrew Kevin Walker balances the procedural intricacy of the search with the psychological ramifications of the killer’s deeds, and for as many sequences of forensic research that populate the screen there are also pointed monologues about the nature of death in the scheme of existence. The final twenty minutes, featuring a remarkable performance by Kevin Spacey as the killer, are brutal in how they force one to face the relevance of the homicidal mind’s warped reasoning. It’s a hard and terrifying world out there, but ambivalence only adds to the harm that it breeds, and perhaps our instinct to remain passive is what gives serial murderers the window to act on their dangerous ideology.

For David Fincher, a then-new filmmaker who had been credited with music videos and had become weary of studio interference (his prior film, “Alien 3,” was maligned and even disowned), those ideas did more than implicate a system: they offered insight into a promising new craftsman who would use that audacity to direct a handful of masterful films over the last 20 years. “The Game” furthered that promise in a story of very complex ramifications. “Fight Club,” certainly his most celebrated, dealt with the underbelly of human interaction as it had been unleashed from a deadening grind of routine. “The Social Network” discovered that it takes a lot of personal destruction to become the most accomplished man in the room. And “Gone Girl” analyzed the wanton forces of a marriage as two people fed on each other’s hatred and disgust. Yet we return to “Seven” the most often of any of his accomplishments, not because others are inferior but because it possesses a germ that speaks to us far beyond the lurid images or the dramatic pulse of the actors. This is just as great as any of the most profound serial killer studies ever committed to memory, but it is also one of the very few honest enough to suggest that such dark impulses are capable of existing anywhere, including our own neighborhoods.