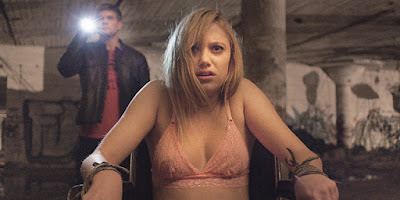 Answers as to what may have killed her (or why) develop some semblance of clarity with obligatory explanations and setups, as they must, but they are superfluous for the sake of narrative momentum; in truth, no one really arrives at a direct source, and indeed the characters can barely offer soundbite speculations about what haunts their waking existences. Yet “It Follows” is rather skilled at working around its mysteries to create a plausible platform in which its targets are exposed to unspeakable danger, and the audience is thrust into their tempered agony like eyewitnesses at a pending massacre. Like “Let the Right One In,” one must not look directly into the frames expecting the conventional musical chords or jump factors that go into horror films. Those who are patient enough to stand back and think about the material further will discover much more working below the surface, some of it even for the sake of inspiring discussions more profound than a mere movie would have indicated.

Consider the early developments. The film stars Maika Monroe as Jay, a blossoming high school student eager to test the waters of her emerging independence. She goes on a date with a handsome boy from a neighboring school, and their actions are curiously stifled; attraction and urges seem secondary to other behaviors, including the guy’s constant need to stare over his back in public gatherings. Then there is a moment where they decide to take their attraction beyond innocent flirtation and have intercourse in the back of a car. It is brief, fun, new. But her afterglow is stifled when renders her unconscious and takes her to an isolated locale, where he explains his motives upon her frightened awakening: he has “passed on” a curse to her through sex that will eventually stalk and kill her, unless she passes it onto someone else. If she dies before that occasion arises, the curse will work backwards and consume him too… as well as those who have come before him.

What is the curse? Our minds give us theories beyond the counterpoints of supernatural gimmicks, sure, but not so fast. The movie visualizes the terror with ambiguous conviction: it often appears as a person walking slowly towards the victim, unseen by anyone else other than those who have been previously tainted by it. Jay is told that there is no rhyme or reason to exactly who the “curse” appears as, though I have opinions based on consistencies – almost always she sees the terror in the form of a person undressed, unkempt or seemingly in need of help. Does the strange phenomenon manifest based on the personality traits of its target? Jay is an empath who cares greatly for those in her circle (including friends that rally even when her claims appear to be nonsense), so perhaps what she sees is refocused from the energies she puts out. This idea is further exploited later when she does attempt to pass the curse to another (a rather sexual teenage boy, notably), and his first visit from the stalking presence appears in the form of a rather attractive half-naked woman.

If we think about these possibilities more than any direct answers, it’s because Robert Mitchell gives us the chance to. His screenplay is not concerned with conclusive explanations, or resolutions that give the likely survivors the benefit of establishing guidelines. The movie is all about its affect – how it makes you feel, how it plays into untapped sexual fears, and about the risks you take being with those you have no firm knowledge of. Many others will sense a cultural parallel; the idea of passing a “curse” to others through sex that is slow but always fatal, for instance, harkens the mind back to the AIDS epidemic. And yet neither he nor his characters are being preachy about these ideas, as most “message” horror films tend to be. Something about the slow, methodical nature of these scenes are disarming in their dramatic effect. That is not to say the movie is without its drawbacks – the last half hour lingers on a single thought process much longer than necessary, for example – but they are hardly an undermining force powerful enough to negate the momentum. Patient and devious, “It Follows” has no qualm about paralyzing the audience in deafening silence and then unleashing fearful episodes in very gradual doses.

Some would call that a novelty for a genre now saturated in the blood of its former victims. I see it as proof of a new trend of ideas. Consider a handful of “minor” horror movies that have gradually emerged from the periphery in the recent years and you can sense the new energy of its architects. “Let the Right One In” (its American remake, “Let Me In,” is nearly as good). “The Babadook.” “Goodnight Mommy.” “The Witch” (I was not an admirer, but so many others were). “The Taking of Deborah Logan.” “Devil.” Even “The Conjuring.” Ten years ago, these premises would be enslaved by the narrow focuses of studio executives interested in one thing: cashing in on all the conventional jolts of nonsense. But now, perhaps, thanks to the rise of a new generation of talented filmmakers eager to see what rests outside the walls of their violent spaces, horror films seem eager, once again, to expand into the lucrative pastures of a new frontier.