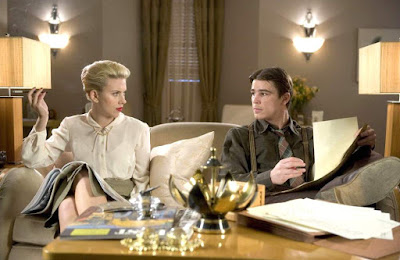 Legend tells of the shocking downfall of Elizabeth Short, an aspiring actress on the cusp of stardom, born to conflicted beginnings in Massachusetts, who came to indulge in bright lights of the west and instead wound up becoming its most notorious victim: a horrifically mutilated corpse on an empty lot in sunny Los Angeles. So grizzly was her murder, in fact, that it captivated as much as it dismayed; a ravenous press was quick to exploit the details of her unfathomable suffering, and thousands of fame-seeking opportunists jumped at the chance to confess guilt for a deed they did not commit (nor would have had the capacity to). The real culprit was never caught, unfortunately, and now the case maintains a deadened mystique for its riddles – how did a woman die so savagely without leaving behind many forensic traces, and why did a police investigation fumble so many opportunities to center on valid leads? Those hoping to hear a tangible theory in Brian de Palma’s adaptation of the James Ellroy novel – a fictionalized yarn using the Dahlia case as a framing decisive – are the sorts who ought to be in the focus group of such ideas, especially as they shamelessly pound away at their plausibility for no other purpose than confusion.

The dichotomy of show business ostentation and its malicious groundwork are at the heart of many prominent movie mysteries – some of them among the great prizes of the cinema – but few descend this far into such madness. “The Black Dahlia” is a hopeless and muddled mess of a film, without vision or prospect, where laziness reaches above the textbook routine of the flatfoot characters and settles shamelessly into their obsessive compulsions just when they should be going deeper. These are not people at all; they are submissives who lack the awareness of their enslavement. That’s because every gesture is never dictated by normal human behavior – only by an impulse of an arrogant screenplay that must shoehorn their experiences into a box with the most basic story requirements. And then they don’t even merit a central point, either. Is this really meant to be about the Black Dahlia at all, or is she a tool to subjugate the arrogance of detectives who boast about their impeccable accuracy? Most of us come to the shadows of modern noirs to be swept up in the guilt and intrigue, not to be abandoned in the thick of nonsense.

The stars are Josh Hartnett and Aaron Eckhart, who play a pair of hot shot Los Angeles detectives at the height of the 1940s crime wave. They are the sorts of guys whose working relationship fluctuates between respect and aggression; a side hobby as boxers seems to provide an outlet for their boiling temperaments, while the presence of an attractive companion (played by Scarlett Johansson) contrasts it with equal measures of mediation (the running gimmick: the Hartnett character wants her sexually, but he holds back out of respect for his partner). They are hot on the trail of a mob-led ambush in the heart of the city when distant sirens attract them to a grizzly scene: an abandoned corpse just beyond the town, of a woman with facial lacerations and dismemberment at the torso. Who is she? How did she come to be here, out in the open, with no visible signs of struggle, and with no internal organs remaining? A series of expository scenes paint the vivid portrait of Elizabeth Short, a young face known for wandering about on Hollywood Boulevard while her dreams of success bubbled under the surface.

An obsession ensues. Lee (the Eckhart character) is so distraught by the meticulous depravity of the murder that it causes a sneer of disgust; he is often seen hurrying off in hushed agendas, inspiring the curiosity of others. Bucky (Hartnett) shares in that sentiment, although they inspire alternate routes; as he builds a case in his head by following ominous leads, he develops an affinity for Madeleine Linscott (Hilary Swank), a socialite who looks alarmingly like the deceased and may have vital information on her final days. The route to it, of course, requires bedroom antics for she and her wooed police detective, who often confuses the lustful motives of noir with the pleasure of orgasm – especially in the more pivotal moments, where foreplay should be replaced with interrogations.

But I digress. The mystery of Short’s murder lurks somewhere amongst a heap of subplots and ambiguous character arcs that eventually overtake the material, and many of them lead nowhere relevant. The screenplay, written with some level of conscious method by Josh Friedman, has a rough idea of what it all comes down to, but the exposition – not to mention the dialogue – seems curiously circular, like it is foreshadowing possibilities that ultimately exist in a vacuum. At a certain point we grow to resent the questions it raises. When we discover that Short’s final professional act consisted of a stag film produced by the father of the Swank character, for instance, what is to be done with this knowledge? Does it lead to a conclusive discovery, or is it yet another red herring meant to put Bucky and his partner back in the crosshairs of a confusing story arc involving a chase against vengeful mobsters?

Nothing adds up. The scenes, voice-overs and critical reveals have the quality of elegant monotony, as if everyone involved is bored by the very pretense of this era and situation. There is a habit implored by the Johansson character that emphasizes our limited threshold for plausibility; she is usually seen in pose holding a cigarette holder a short distance from her face – not like an actual movie star, mind you, but like an enthusiast who memorized poses without understanding the finesse of them. And that’s ultimately what “The Black Dahlia” represents to its unfortunate viewers; no one is in this for the sake of understanding the thesis, they are here collecting royalties while mimicking the style and suspicion of the great modern noirs like “Chinatown” and “Body Heat,” all while forgetting the conviction that goes into them. And the film’s ending, which demands a theory for the fate of the Black Dahlia murder, makes absolutely no sense in contrast to forensic certainties. Here was a woman whose body was carefully carved out like an elaborate anatomy dummy, and we are expected to believe she was murdered by someone with no pre-established knowledge of surgical procedures?

Is De Palma to blame for such an elaborate misfire, or are we ignoring more subterranean causes? That would depend on who you ask. In a recent documentary about his filmography, the impassioned director called the film a conventional studio endeavor, totally guided by hands greater than his own, and nothing more. But conflicting reports suggest there’s more to the story. Well before the film was released to theaters, James Ellroy, the scribe behind the source material, gave an interview where he discussed an early print of the film, in which he glowed about the faithfulness of the adaptation. But that version, it turns out, was a 3-hour film, as opposed to the significantly shorter cut that ultimately wound up in theater houses across the country. The truth of the matter? De Palma was ordered to trim a third of the picture for purposes of time, fearing that a much longer movie would be a hard sell to a public with shorter attention spans for period thrillers. Then news broke of another prophetic signal: knowledge that the material had originally been given to David Fincher to helm, who reportedly opted out because he feared not being able to make the film he wanted. So how did it come to pass for a notoriously stubborn veteran to be given carte blanche to shoot the footage he desired, only to have it trimmed without much visible resistance?

I have a theory. De Palma is as focused as any number of directors when the interference of a studio is not a question of concern, but unlike a Fincher, he rarely contradicts their creative dependence. Think of “Mission to Mars” and “Snake Eyes,” two of his most recent failures; if we are to believe the whispers of those involved in either (including the director’s own), a completely different vision was adopted than what the end results yielded. But by and large he has supported the ruling philosophies of his superiors, resulting in endeavors that have been hacked to insufferable conformity. If James Ellroy saw a far better film prior to the studio’s edits, as it has been reported, that version may very well go down as one of the elusive buried treasures of the cinema. But that may also be a stretch of logic, a softening of a blow when absorbed into the context of what remains. Any other cut would have been superior, even if it had been spliced together by an editor with attention deficit. What we are left with now is a film so bad and incomprehensible that it has few defenders, least of all those fascinated enough by the Dahlia case to expect something more profound than ham-handed fictional exercises.