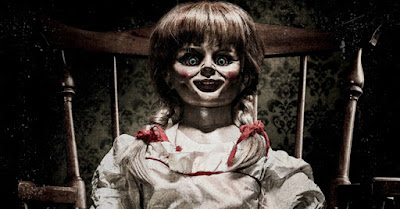 We can have fun with the concept, at least, if there’s a certain modulation of skill within that experience. On the higher end of that possibility is “The Conjuring,” another film about characters who find themselves cursed to the hauntings of vengeful spirits; so well-conducted are the scenes that they rise above the formula and embrace the relentless endurance tests of the great ghost stories. Yet somehow those involved in “Annabelle,” a direct spin-off of said film, have lost sight of that value. What they are selling is an outline of a horror film rather than the full embodiment, guided by general exercises instead of ambitiously-choreographed routines. And the individuals on screen don’t make the journey easy, either; they are sometimes so oblivious to the most fundamental warning signs that we have little empathy for their pain. When a priest with conviction shows up in their lives to offer that all-important insight for the benefit of the climactic confrontation, the motive is incidental – is he trying to save the souls of those trapped in the web of terror, or is he trying to salvage what remains of the audience’s patience?

Things, at least, begin promisingly enough. Mia (Annabelle Wallis) and John (Ward Horton) are likable people preparing for the birth of a child when he brings home a rare find: a collectible doll that matches the series which she is avidly collecting. Appropriately named Annabelle, the figure before her possesses a strangely exotic gaze – not the adoring one of her sisters, but a grin mixed with a pout that seems to imply suspicious motives. The collection finds a tranquil home in the nursery pending the birth of their first child, but strange destinies intervene. One night they are awakened by a flurry of violent sounds next door; when Josh goes to investigate, the culprits – a pair of obscured Satanists – sneak into their house and attempt harm on Mia. But their motives, at first seemingly random, are apparently more thorough: they are attempting to summon a demonic influence, and the woman sees the Annabelle doll as an attractive conduit for manifesting that evil. And so begins a mysterious descent into hauntings that can be seen coming from a mile away, played with gusto and ambition, and seen through eyes that would not understand nuance if it had fallen from the sky and latched onto their faces.

All this transpires in a screenplay that isn’t so much written as it is labored. The scribe, Gary Dauberman, is well versed in the language of horror but has trouble formulating a cogent trajectory; there is little sense to where anything is going, and no one involved seems at all motivated to apply a strategy unless it’s in the act of a knee-jerk response. At some point there is almost a self-awareness about this dilemma, facilitating the need for an added angle – in this case, a subplot involving Evelyn (Alfre Woodard), a bookshop owner who has startling insights for the would-be mother and her phantom stalker. Then there is the issue of the John character never being where he could be of value; an aspiring doctor always off at school, he only shows up to ease the nerves of his frightened wife or feign concern long enough to displace her concerns. In some way the film depends on that, because a more present personality would know something is amiss. Against the more modern sensibilities of movie hauntings, “Annabelle” supplies the victims with a sense that it’s all in one’s head, even as priests and strangers at bookstores can tell something more is wrong.

Where is the motivation? Why would one bother now, especially this far in the game, when horror movies have finally moved away from relentless cynicism and appear to be living on the edge of their possibilities? I am reminded of “The Babadook,” one of the more recent masterful offerings of a genre in renaissance. There is an almost symphonic art to reaching for the guts of a thrill. When they occur to people caught in the throes of peripheral suffering, our hearts share in their experience, and we become enthralled by the terrors that follow them. By many estimates that film has become the benchmark of the modern mainstream standard, a lesson that might benefit anyone new to the fold of creating these sorts of pictures. “Annabelle” represents a more primitive desire, but it is all mechanics and no soul. I didn’t care about anyone involved, nor did I sense they were fighting with zeal against the unseen forces against them. Once upon a time it was fun to run in the other direction, however misguided, when a terrible force was trying to cause you great harm. Those trapped in this subpar endeavor aren’t running towards anything other than fat paychecks.