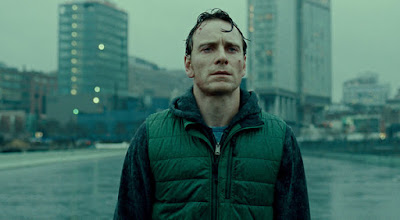 Much ado was made of “Shame” when it first arrived on the scene six years ago – including a widely-publicized media spread about its well-earned NC-17 rating – but as that notoriety has faded the movie persists hauntingly in the mind, like a painful reverie clinging anxiously to its devastating source. If the end result did not yield to the expectation of its time, however, that makes it just as much an ironic indictment against those who saw it with blinders on. To many of us there is a desire, an almost perverse allure, in coming out to see actors we admire undressing for their roles, especially if their physiques may be as enticing as their on-screen charisma. That nearly every detail of the male anatomy goes on display in many of the key scenes here is not an understatement. Nothing is obscured. But the film inspires no sense of arousal, nor any sense of enthusiasm for the act – it remains alarmingly distant from all notions of eroticism, observing intercourse from a point of inert expression that undermines our interest in the carnal throes of lust. Not since “Eyes Wide Shut” has any movie been so audacious to take the clothes off its characters for an interest outside of mere sexual curiosity.

Two key events undermine the ambivalence of his vicious cycle. The first is a female coworker named Marianne (Nicole Beharie), whom he sees as more than just an object of wanton fantasy; somewhere between the chronic masturbating he even manages to ask her out on a date, and they exchange clunky platitudes that seem to be distractions from their underlying magnetism. The second key event involves the arrival of his sister Sissy (Carey Mulligan), a lounge singer with self-loathing issues who shows up unannounced because of his inability to return phone calls. “If I left,” she insists, “I would never hear from you again. Don’t you think that’s sad?” Of course deeper points of interest may provide additional insights, but the movie is rarely interested in the specifics. We accept that not out of necessity, but out of understanding; for Brandon and Sissy, theirs is the kind of relationship so shaky that to know the reasons would color our focus. If they are obligated to care about one another, it’s perhaps because holding a bad hand can be a lot for two scarred siblings to have in common.

Brandon is played by Michael Fassbender, whose own manner has the quality of solemn displacement. In his most demanding roles he is usually seen playing through the material with the grace of a calming influence, and there is a sense that beneath the tempered exterior lurks the pain and torment of a man who does not know how to vocalize them. Other directors have taken notice of that behavioral forte (including Ridley Scott, who has made him an effective secondary villain in his prequel “Alien” franchise), but in “Shame” they come to a profound crest – his is a character that might not exist, might not even be convincing, without the mannered influence of his on-screen restraint. Notice, for instance, how he handles the early encounters with Sissy when she makes herself at home in his high-rise apartment. There is a tinge of sympathy interlaced with frustration that isn’t quite verbal, and after his boss asks her out and then seduces her in his own bedroom, he fidgets and paces in the next room but never confronts the discomfort head-on. Would a Ben Affleck or a Brad Pitt have done as much while saying so little? Who else could convincingly play the moment with such effective restraint, all while exhibiting the same underlying dramatic chords?

Consider also the most important scene in the film, in which Brandon persuades Marianne upstairs a day after their first date. They go through all the obligatory motions of seduction and foreplay, but an affectionate caress seems to unravel their shared momentum. He finds himself unable to perform. Though there are brief verbal exchanges, neither confronts the problem head-on. We know instinctively why he can’t make love to her. Then the next scene shows him returning to his routine of sleeping with strangers, where he neither has to worry about seeing them after or even making eye contact during. If all unhealthy addictions come from a need to rob others of their power, then sex poses the most dominant of possibilities to Brandon – for a time he is the master, the conductor of his own pleasure, and others are tools in that quest (is it at all strange, even, that he wanders into a gay club in a later scene, desperate to achieve another orgasm?).

McQueen, who has directed Fassbender in all three of his feature-length movies, is a filmmaker driven by sharp honesty. “Hunger,” the insightful study of Bobby Sands and his life in an Irish prison, announced him as a turbulent force in the slipstream of modern Hollywood. “12 Years a Slave,” which rightfully won the Academy Award for Best Picture, is considered the most devastating depiction of slavery ever committed to the screen. But it is “Shame” that remains his best and most sublime, if for no specific reason other than its sense of remarkable discipline. Never does he engage his characters in a manner that elevates their predicaments into ham-handed melodrama, nor are there frequent discussions about the nature of the problem bogging down the pacing – everything is conveyed by behaviors and in agonizing passages of silence. If there is any specific narrative influence he relies on in forging that trajectory, “American Psycho” comes to mind more than it should; there are obvious parallels, such as how Brandon and Patrick Bateman both appear to be byproducts of a pain that goes unnoticed in a closed world of corruption and greed. The performances, perhaps, are pitched at a much different angle. Christian Bale was all too delighted to be living in the skin of a self-centered madman, while Fassbender seems like he is struggling silently in an identity prison of his own making.

And yet to say that “Shame” and “American Psycho” are the most alike in their thinking is not a vulgar contrast. Like the Patrick Bateman persona, Brandon uses his high social standing as a platform for pleasures that are as morally ambiguous as they are destructive. Though Bateman’s short list of values include elevated self-image, sex, gratuitous violence and 80s pop music, Brandon cares strictly about what goes on in the bedroom – it is the only place where he can exude the control he craves. Their fundamental difference is the tone they strike. Mary Harron’s film focuses on satire, whereas McQueen is far more interested in the tragic repercussions of this story. But they both exist, I think, to emphasize the danger of privilege. From the smoldering embers of a pitiless class system are the harmful tendencies of those who ought to know better, who allow money and standing to inform decisions that enrich only their own fragile egos. And at some point others must look away because their behaviors are too much to contemplate, much less reason with. Is it at all coincidental that they both live in sterile spaces of white and grey? Or that their only significant relationships are with women who are barely allowed at arm’s length of their circular routines? This is a laboratory at which the man behind the cracked façade is moved through a maze of shallow pleasures meant to erode one’s mental stability. “Shame” shows the experiment as it moves beyond the search and settles right into the latter stages, in a moment when the only thing worth feeling anymore is the sudden rush of physical release.