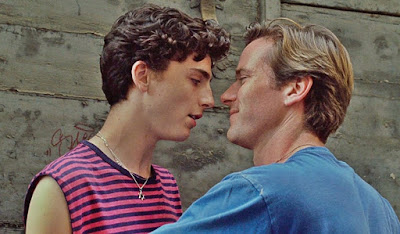 That is not to say the film lacks an understanding of its backdrop or the risks within it. Set in 1983 in Northern Italy, the story concerns two young men who exist in that elusive time between gay rights activism and the AIDS crisis, where they can only theorize the response of outsiders as they restrict themselves from experiencing their attraction in open light. Yet director Luca Guadagnino creates an atmosphere of honest, loving relationships that seem capable of withstanding any challenge they face, right down to the loving gestures of neighbors who come and entertain on warm nights in the sunshine (one of those couples, not coincidentally, is also gay). And if there is any cerebral disconnect caused by the age difference between the two lovers, it goes to emphasize, I think, the contrast of attitudes between an America that suspects predatory instincts and a country where consent exists in more relaxed circumstances. What goes on between a teenager and a 20-something here is not an abuse of carnal instincts, but an act of gentle sexual discovery.

Moreover, the leads are not walking clichés with predestined behavior patterns weighing down the process. The young hero is Elio (Timothée Chalamet), a Jewish music enthusiast on summer holiday with his parents at a villa in the Italian countryside. While his days are occupied by a relaxed routine of headphones and flirtatious interludes with a local girl, a new arrival catches his attention: Oliver (Armie Hammer), a research assistant to his father, who will spend six weeks with the family while Mr. Perlman (Michael Stuhlbarg) makes some tremendous architectural finds off the Italian coast. Because all the characters are evoked as intellectuals, that means behaviors at first seem strangely abrasive – their words are pitched at the level of uncomfortable small talk and self-conscious harangues. Of course that also means they are hiding deeper motives, but what are they? Are Elio’s eyes drawn to Oliver at a dance, perhaps, because he’s curious as to how to show affection to a girl? Or is he wishing he was in place of the girl? When Oliver offers to massage out the knots in one of the teenager’s shoulders, is that a come-on, or simply a kind gesture? Why does Elio recoil from it?

All these behaviors are not used to service a mystery or an emotional riddle, but a study of an attraction between two individuals who lack the experience to deal with a sexuality that is just starting to emerge in their young and complex lives. When it does, there are no obvious innuendos or emotional cues to drive them; interest is expressed in a dialogue exchange that is only slightly suggestive, and the first physical exchanges are amusingly awkward. Lesser actors might have trivialized the details subconsciously, but both Hammer and Chalamet have a natural chemistry that underlines the motive; as they move through romantic interludes that are strange, slight, slowly paced, erotic and even deeply meaningful, there is a sense that they grasp the perceptive quality of their union, even beyond the liberal use of their unclothed bodies. Some moments don’t even feel scripted, such as a scene where Elio reminisces about his first encounter with Oliver while only keeping the company of a peach. And then there is a moment of vulnerability shortly after that is both unexpected and monumental – it adds resonance to a portrait of a young face who enjoys the feelings he is experiencing, although has yet to recognize them as normal or acceptable.

That the movie follows them with such grace and tact is refreshing in this age of vulgarity and excess. At a certain point – especially as the two lovers arrange their escapades in secret – we expect the film to descend into the slog of an urgent cultural statement, potentially as one (or both) of them become victims of some sort of glaring mistreatment. But the movie resists those urges. And what surprised me most, even in that context, is how delicate the movie deals with the obligatory epilogue. One of the key closing scenes involves a conversation between Elio and his father – who is far more observant than he lets on – and Guadagnino handles it with a refreshing empathy that is almost heartbreaking. “How you live your life is your business,” his father says. “Just remember, our hearts and our bodies are given to us only once. And before you know it, your heart is worn out, and, as for your body, there comes a point when no one looks at it, much less wants to come near it.”

Then there is a final scene that comes close to undermining all the momentum of Perlman’s conclusive monologue. It is an unnecessary afterthought – a moment so redundant that it exists, I suspect, only to kill the hope of an audience that demands absolute closure in all circumstances (even when the scenario does not call for it). How did a relatively astute filmmaker like Guadagnino convince himself that it was appropriate or even necessary? Was he coerced by a studio head, or pressured by a test market that did not like the idea of its young hero being left behind in an uncertain outcome? Anyone watching these scenes is not doing so expecting a cheerful ending. That’s hardly the point. But Elio and Oliver’s experiences evolve so firmly in the grasp of joy that outcomes (firm or otherwise) are almost superfluous. By then “Call Me by Your Name” has, at least, earned our favor. This is a touching, honest and organic journey through these lives, far above the reach of those expecting the conventional route of a gay romance. Who knows, maybe one day a director will be more apt to leave us on a satisfied note than one that plays like cerebral sabotage.

BTW, did you know that Timothée Chalamet is Jewish? His mother, who is American, is Jewish. I mention this because the mainstream media is pathologically obsessed with exactly only one half of his background, French, and categorically refuses to mention his other half, Jewish. Even though his character in this movie isn't French - he's Jewish, and spends half the movie wearing a Star of David. So if not now, when? In fact, Call Me By Your Name is the rare major film where three actors of Jewish heritage (Chalamet, Hammer, Stuhlbarg), play Jewish characters in the leads.