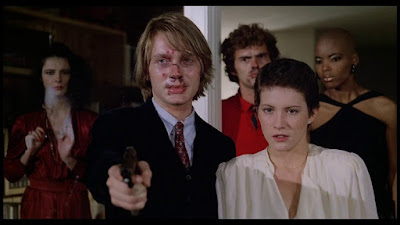 The crux of the endeavor comes down to two key characteristics: 1) the almost direct recreation of Craven’s narrative; and 2) the casting of David Hess, from the prior film, as the chief antagonist against an assemblage of hopeless victims. His Krug remains one of the more evil and shameless of all horror film villains, and here he provides justifiable reminders: eyes that are inviting, a smirk that suggests ulterior motives, and an attitude that can impeccably balance an engaging nature set against grotesque tendencies. Part of his lure is, I suspect, that he is both attractive and well-spoken, on screen and off. Yet not one of those in these horrific worlds is spared a gruesome fate; that would undercut the point of the embodiment, which is that good-looking men are usually the most dangerous of all, especially when their charms encourage the submissive nature of would-be prey. Hess’ distinction may have been so precise, so firmly realized, that it is little wonder he was looked to for this indirect retelling of Krug’s own mayhem.

But that brings us to Alex, his persona in this far lesser film, who comes across more as a shallow and aimless vessel of flamboyant catastrophe rather than a direct homage. Perhaps that isn’t entirely his fault, given what he must work with. The first scene emphasizes this possibility with almost alarming consequence: while behind the wheel of a car, Alex spots the view of an attractive female driver and attempts to catch her attention. She returns a gaze but pays the gesture no consequence. Then, after a long creepy chase on the main drag, he corners her on a side road and forces their cars to stall, and what proceeds is a disturbing exchange of predatory formality that ends in rape and strangulation in her back seat. If Deodato wants to establish this moment as a tonal precursor, his execution is decidedly muddled, and the almost cheerful introductory music playing during the encounter acts almost like an impulse of self-sabotage.

Perhaps, in some roundabout way, this could have suggested satire or parody. The next several minutes contain details that even embellish that prospect. Alex and his close buddy Ricky (Giovanni Lombardo Radice), both smarmy and cloistered in self-motivated perversions, are mechanics prepping to go out for drinking and dancing when they are interrupted at their shop by a last-minute arrival. The culprit is Tom (Christian Borromeo), whose car seems to be having engine trouble. A simple fix leads to a gesture of gratitude in which Tom invites the men back to his place, where they can all drink, get to know each other, dance, play games and have some fun with a few beautiful girls. A woman in the front seat coldly feigns an attraction for Alex. Two others at the house – a large mansion conveniently nestled off the side of the road – show the same sense of attention to Ricky, who is encouraged to strip and dance for them in the living room. Alex is displeased, suspecting that they are teasing him. Meanwhile, none of the party guests seem at all like trustworthy symbols of potential victimization, even though they are keeping company with decidedly questionable newcomers. Do they have their own ulterior agendas not yet revealed? Or was the early scene, in all its conflicted and distasteful wonder, simply a way to mislead us?

A method of vague and mysterious motives drives them all towards a second and third act that are long, tedious, unkempt and bankrupt of simple consistency. Any attempt to illustrate these depressing realities would all automatically be sidelined by a description of the film’s most famous sequence, which begins after Alex has revealed his nature and ends when one of the victims attempts to escape. Allow me to illustrate the point. One of the women, whom Ricky is attracted to, is advised to lay back and be raped by a razor-wielding Alex. Ricky begins to tear away her clothes, but her persistent cries and pleads do nothing to add to his arousal; in fact, he is downright mortified by the idea of having sex by force. This implicates him as a potential betrayer to the chaos of the lead, much as a character proved to be in “Last House on the Left” in the final act. But Deodato reaches this reality in one of the most thoughtless and shocking ways I have ever seen: after the would-be rape victim manages to rush away from captivity, Alex tells Ricky to chase her down, and when he finally apprehends her, his words are succinct: “please don’t run, I really don’t want to hurt you.” Not only does the woman have a sense of compassion and gratitude towards this gesture, she exhibits it by making love to him in the garden while romantic music plays over the montage.

Meanwhile, the scene randomly cuts back to Alex taunting a new arrival: a blond virgin, whom he has strip naked while running a straight razor across her naked body. The others stare blankly at this reality without much emotional conviction. Are they too paralyzed by the horror? Ambivalent to it? Their frozen presence only adds to our own personal discomfort, particularly as the soundtrack seems to point towards disturbing tones. Its as if someone higher than the villain is taking joy in this exchange from behind the camera. But then even those possibilities are disputed by a climactic reveal that does even more damage than it intends. To know it is not simply to question all the prior details, but to wonder about the intelligence of the potential victims. Why, considering these discoveries, are they still so complacent to the matters in front of them? Why is there no reaction, no sense of sympathy or loathing, in their faces when the virgin’s breasts and torso are cut with Alex’s blade? Why do none of them come to her defense, in any fashion, after the inevitable turning of the tables, when their tormentor no longer has power over them? And how does he not ever see this opportunity coming? Among countless key differences separating the film from its impactful ancestor, ranging from its lapse in taste to its uncertainty of judgment, the most damaging conduit is the film’s blatant disregard for simple measures of intelligence.

In some ways, one wonders if Deodato was compelled to be paralyzed by his own restraint. The famed Italian filmmaker who only a year before shocked the movie-going populace with “Cannibal Holocaust” – an almost unwatchable display of human and animal cruelty – was already knee-deep in criticism, necessitating the decision to take more leisurely approaches with his follow-up. That makes the use of this premise even more tragic. If Bergman and Craven proved one thing consistent among their attempts at dealing with this story, it was that no sound resolution was possible without staring back at the evil with confident, unblinking eyes. Yet here is a retelling that never allows us to walk those lines. It has no grasp of the moral implication. What we are left with, by the end, is a bunch of clueless faces standing around, submitting to the cause of a mistaken screenplay, and a director who has studied nothing of mood or context. “House on the Edge of the Park” isn’t simply awful, it’s a languid attempt at coming across as cheap genre entertainment.