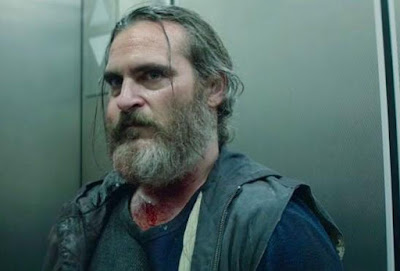 Some level of fascinating drives our otherwise ominous expectations: where does a story like this hope to go, particularly in the age when psychology has gone out of fashion and literal meanings are more appealing to the common moviegoer? To look at any two moments of Lynne Ramsay’s fascinating film is to sense the rift it will cause in others. Some, perhaps justifiably, will be left with the sort of glaring aftertaste usually reserved for graphic horror films or depressing thrillers. But there is an undercurrent beneath the frames that goes to the bloody heart of the matter, giving a wondrous sense of dramatic desperation to each of the characters as they move through this macabre labyrinth. Much like her previous film, the vastly underrated “We Need to Talk About Kevin,” it is not so much about the act of violence as it is a meditation on the source – and a powerful one at that. If the antihero of “Taxi Driver” is the ongoing archetype for the angry loners of urgent modern dramas, then Joe becomes the most arresting of his successors.

A portrait of unrelenting anger builds in the early scenes. After returning home from a job in which he was hired to murder the captors of a young girl, Joe is seen entering an old suburban house and tending to the needs to his aged mother, who frequently seems disoriented or in need of care (although the movie never clarifies her ailment). Scenes of them both passing each other in rooms and hallways serve to recall old horrifying memories of an abusive father, who often chased them through the house carrying a hammer as his instrument of torment. The flashes are brief, but enough is in them to gauge where his hostility emerges, and when he is asked to partake in his new mission – that is, rescuing a rebellious teenage daughter of a senator from what appears to be sexual enslavement – we recognize his motivation. Yet the film throws a monkey wrench into his pattern after she is saved by him in a night of relentless bloodshed; after taking her to a meeting point at a local hotel, he is ambushed by police officers who have either 1) assumed the wrong reality by finding an underaged girl in a hotel room with him, or 2) are working for someone that clouds their enforcement of law.

Whatever reality Joe finds himself dealing with is secondary; the movie is about the complex and cruel world of abuse, how it overlaps that which we accept as comfortable, and how it can, quite literally, erase the lives of people who have endured it. There is a reason he is the way he is, but who notices? Certainly not his mother, who knows nothing of his lifestyle outside the comforts of their nest. Certainly not anyone he might consider a friend, who know of Joe as that meek loner who wanders in and out of existence like a social nomad. And certainly not the people who he will encounter on his bloody trek through the macabre, all of whom seem to look upon him as an outcast incapable of carrying so much aggression. His past, furthermore, has accelerated the progression of otherwise troubling personal routines, including knife play and asphyxiation; are they sexual releases for him, or rituals developed to create escape from insurmountable terror going on at home in his childhood? The movie slyly deals with these possibilities in passing as his trek through the trafficking underworld inevitably takes him to the doorstep of a high-ranking politician, who may be the most troubling source of his current quandary.

Always at the center of this is a riveting performance by Joaquin Phoenix, who is remarkably understated given the austere nature of his character’s psyche; always he is playing the material as if gripped by the shock of the matter, without looking like a victim or a submissive. And when it comes to dealing with those who are his enemies, he doesn’t approach the violence as if obsessed by it; each strike is an impulse that plays in his head like an escape from childhood, and from a man whose anger has all but left him a shell of his own terrible experiences. I was enthralled watching him as he handled all the facets of his existence, ranging from the angry tirades of his nightlife to the cautious and loving rituals he goes through with his mother, which include singing in the kitchen and polishing silverware in some of the gentler scenes. Later, when tragedy literally bleeds into his private life, there is a scene between him and a hired hitman that is remarkable for its moral complexity; these are men who are contracted to loathe one another, and yet share a moment of respect that has a strange, intricate complexity to it. These are not moments orchestrated by a filmmaker who is bankrupt of tonal conviction, but passages of an existence in which everyone realizes they are all destined for nothing at the end of their violent encounters.

Ramsay is not a director content to reduce dark human experiences to vulgarity or excess. There is a deep milieu lurking in them. Consider how well she modulates this in “We Need to Talk About Kevin,” about a mother whose son seems born to hate her, and then must force herself to be his only source of redemption after he commits a series of heinous violent acts. Their silence, their quiet sense of despair, is the most revealing – somewhere within all that awkward balancing and hatred is an understanding that people sometimes do things without reasons that are clear, and there is no reasoning sound enough to make peace with it. Joe’s experiences are more direct here, perhaps, to contrast that; we know exactly why he is a man behind the bloody hammer, and what occurred to him directly correlates to a youth in which cruelty was normalized. It is little wonder the movie is called “You Were Never Really Here” – when all that remains is the battered shell of an identity, does anyone remember who you were, much less if you were ever present at all the important moments?