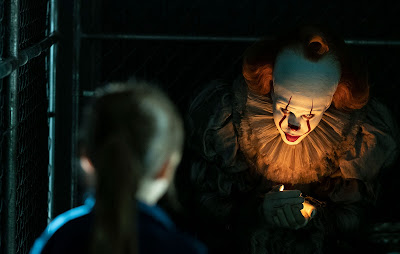 The seven leads have all but grown into their adult forms in this latest chapter, but their minds seem stilted by insecurities; they have learned to play the game of maturity without actually embodying the shell of it. Just observe how some deal with being summoned back to Derry, Maine, where Pennywise the clown is once again reigning terror on innocent lives. The foul-mouthed Richie (Bill Hader), now a comedian just minutes away from a stand-up routine, wanders outside and vomits over the balcony. Eddie (James Ransone) gets into a traffic accident. Bill (James McAvoy) swells with emotion as he reminisces about the young brother who died there years ago. And Stanley (Andy Bean) makes a horrific decision that serves to amplify the dread of his friends throughout the ensuing ordeal.

Others underline the impending discomfort with silver linings – including Ben (Jay Ryan), who will get to see the girl he crushed on as a young chubby nerd, and Beverly (Jessica Chastain), who isn’t so much running back to Derry as she is escaping an abusive marriage. If their individual stories seem curiously specific in a time of broader narrative strokes, it’s because the screenplay by Gary Dauberman is drawing on the richness of his source, a Stephen King novel that remains in high demand for readers who admire his knack for painting vivid portraits of fear in young faces. One of the added treasures of the book was its ability to fluctuate fluidly between events of the present and the lost memories of the past, and here director Andy Muschietti accomplishes something rare: he creates a dependable stylistic rhythm in bouncing between two timelines, not so much to rehash events from the earlier picture as to reveal details previously forgotten. Is he, in a way, insisting that the first movie was incomplete by recalling on the past so frequently? Some could suggest that. But the more sound theory is that these new insights are better suited as flashbacks because of how well they inform the present behaviors. Muschietti creates an undeniable dramatic tension in handling these transitions, in a movie where the emotional weight is informed by the horrors of childhood more than uncertainty of the modern circumstance.

If that creates the impression that “It: Chapter Two” is not full of the obligatory jump scares and visual revelations, fret not: a great deal of the film relishes the opportunity to test your stamina. All the expected plugs are there, including shadowy figures jumping out of the dark and monstrous rows of teeth feasting on victims while the soundtrack gradually thuds to life, but the movie does not depend on them as a singular device; it is more interested in seeing how very specific people have dealt with the fallout of surviving literal horror. To them, the evil clown has provided dual significance: both as the primary source of all their pain and the target of the anguish they seek to unleash. The clown, meanwhile, is expanded on by backstory provided by Mike (Isaiah Mustafa), the lone holdover in Derry, who suggests an ancient origin so elaborate that some might recall the legend of Beowulf, who also lurked in the darkness in order to feast on the weak before being challenged by an equal adversary.

Bill Skarsgard, who plays the monster in his clown form, has a great deal of fun with this portrayal. His is a face that knows how to curve in all the devious ways, without over-exhausting the impulse to swallow the scene whole. Notice how he holds his own so well even while being talked down to by his own prey, many of whom gradually begin to understand his nature. “Look at you. You’re all grown up!,” he chimes in towards the end, in an almost melancholy glee. Something within Skarsgard compels him to add touches of sympathy to the performance, as if to suggest the villain beneath the makeup is almost boasting in admiration that these characters could beat him at his own game. This scenario also provides a great psychological underline to an otherwise rousing final act, full of chases and close encounters, inside a cavern in which everyone meets for one final showdown. The ending, while conventional, comes as it must, after sacrifices have been made, truths have been unearthed, and the material has pulled us through an exhaustive sweep of horror formula staples. It is all done so well that we almost treasure the taxing nature of it.

There are a great many moments and sequences scattered across “It Chapter Two.” On the other hand, audiences might take issue with there being so many. At nearly three hours, the film begins to feel far more involved than it needs to be, and there were several people checking their watches at a recent screening I attended. Were they bored? Doubtful; even in long stretches, there is always something substantial moving through the camera frame. Each of Pennywise’s key opponents is provided adequate solo time, where they are asked to relive painful experiences in order to understand what must be done in the end. Those are solid, competent stretches of filmmaking. So what weighs the whole thing down? A subplot involving an old bully from childhood is one of the more glaring missteps. It doesn’t fit with anything. Furthermore, his integration leads to two of the most questionable knife injuries I have ever seen in a movie: one in the side of the face, and another in a man’s sternum, without any sort of logical follow-through. Any normal anatomical explanation would insist that both these deep wounds would inspire, at least, emergency hospital visits, yet both victims simply move on as if barely phased by them. A more plausible rewrite: have the characters become so empowered by surviving the clown that they function above normal human limitations.

Both movies, now widely accepted as the definitive version of this story, were directed by a man who has a clear passion for the material. Andy Muschietti has not messed around in making movies that are faithful mergers of literary and cinematic value; though he has changed the eras and some of the finer details, the very soul of King’s work feels at home on the big screen. This second chapter isn’t nearly as resonant as the original, however; sometimes the movie’s pacing is very uneven, and certainly the isolated stories go on to rehash more than is necessary, but it all fits a larger picture which is enriched by the full sweep. Think of how you felt, for instance, when you finally saw the closing chapters of “The Lord of the Rings” trilogy, or how you might walk away from the next “Star Wars” knowing the saga has come to an end. Stories like this commit themselves to our imaginations over time rather than in an instant, and all the pieces coming together can be almost transcendent. Who really cares if a story arc veers off for a moment, or includes more than it should? At the end of the day, you treasure the entirety of the experience.