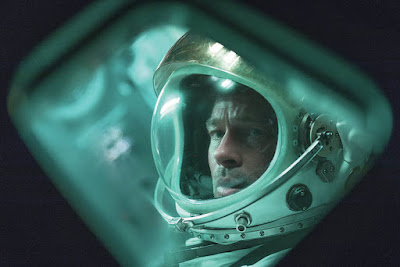 The movie is an audacious, agonizing, engrossing meditation on personal isolation, amplified by a cosmos that seems to exist just for the sake of reducing one man’s experience to an indistinct blip of noise. Surrounding him is a production design that also overpowers the camera lens: endless shots of empty space, rocket exhaust, clusters of distant stars, and planets that drift in and out of shuttle windows like strangers without engagement. They are pieces of a tapestry that has been woven too broadly for any mind to comprehend, yet impossible to decipher in the span of a normal lifetime. But what is there to explain? This is where “Ad Astra” splits from its peers and embraces the morose, quietly conceding amongst all the tension and turbulence that the journey beyond is wrought with void.

The movie begins conventionally enough, aboard a floating space station that is nearly destroyed by an energy field passing through Earth’s orbit. Roy, outside this floating vessel, abandons his post and flees the scene, only to wind up in the ominous board room of inter-space operatives who reveal the secret of the disturbance: the Lima project, a ship that disappeared off radar two decades prior, has apparently gone into meltdown just beyond the orbit of Neptune. The catch: the ship is piloted by his father, long thought dead, and the only way to reverse the effect of the deadly outflow is to contact him directly. Roy is therefore convinced – albeit with minimal reservation – to fly to the moon and board a rocket to Mars, where the space technology is great enough to communicate at that distance, and send out official communication to the legendary Clifford McBride. The consequence of not initiating contact, of course, means that continued energy waves might ultimately decimate life on Earth, but of course it would be; for any film that uses deep-space travel as its launch point, an urgent sense of distress must exist to inspire such an abrupt departure or journey. And it only takes simple solemn Roy under two hours – in movie time, at least – to make that long journey.

What he finds might not be nearly as interesting to some as what he experiences along the way – namely, a lot of suspicious exchanges that suggest danger lurking nearby – but it is the final descent into the Lima’s ship that captivates and ultimately elevates the experience above the typical trajectory of most modern space operas. In the midst of 21st century technological ascension, filmmakers and their visual wizards have become enamored by the idea of going great distances – and there is some level of fun in that – but are rarely interested in doing more than necessary with the possibility. Others, like Kubrick or even Cuaron, whose recent “Gravity” remains pivotal in expanding recent genre rules, are not content to just show us the stars from within a fresh vantage point; they want to understand our purpose among them. James Gray has implored the same audacity but does not arrive at a parallel meaning; instead of being immersed by the profound awe of impossible discoveries, he has wandered far beyond the capacity of ordinary human understanding and crashed into a hard, deafening silence. While its look aims for “2001,” that unmistakable cynicism comes right out of the vintage Herzog playbook, which also inspired his own “The Lost City of Z.” In each, the thesis is direct but almost agonizingly honest: the wilderness is wild and untamed for reasons too great for one person to comprehend, and any attempt to shatter the barrier is only an invitation to being consumed by it.

All the cues suggesting this outcome are there, but rarely are they portrayed with this much painstaking focus, or this sincere an approach. Gray anchors that notion in performances that seem equally alarming, particularly from Brad Pitt; normally so straight-faced in his roles, his Roy McBride evokes all the quiet desperation of a man who is never certain of himself, much less what might transpire beyond the Earth’s orbit. Pitt is sublime in that delivery, although his voice-over does seem redundant; after each key plot point, he whispers dark editorials that seem recycled from one another, perhaps to emphasize the broad assumption that his own sadness is a circular handicap. Meanwhile, supporting performances from Tommy Lee Jones as the long-lost father and Donald Sutherland as an estranged former colleague provide moments of emotional clarity, and though the screenplay by Gray and Ethan Gross does not use them substantially, they function as they must: more like integral pivots on a machine fueled by deep self-reflection.

Gray’s thesis will likely be at odds with the desires of the mainstream, which is primarily interested in conquering the impossible amid thrilling action or dramatic tension. “Ad Astra,” by contrast, offers them nihilism. All the possibilities of the unknown are there, and the visuals – particularly the sequence involving Neptune – are striking in the way they evoke the monumental awe of the cosmos, but in them is the acknowledgment they will never be more than symbols of our own modest limits. I connected with that ideal immediately, and it is emboldened by a worldview that believes nothing may lie beyond the mortal plane we currently occupy. Few filmmakers live today who are courageous enough to peer beyond the enthusiasm and sense those workings, especially in the hands of people who directly pursue the answers. Here is a man who has made a resonant statement against the lofty ambitions of men who have aimed too far to hit a tangible target.