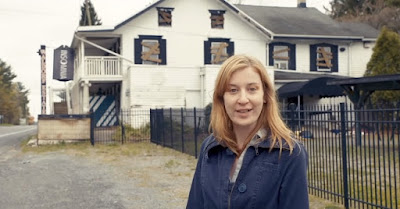 Vanessa, who serves as the film’s narrator and protagonist, plunders along in her observations as these questions are presented ad nauseum to all the involved parties. “I could leave,” one of the actors on set suggests, “but no one would pay as much for a gig like this.” The hook is that their boss, the enigmatic Russell Wynn, has acquired their talents at the hotel on the contingency of lucrative financial compensation. Whatever fears they may possess are hidden behind uncertain eyes and gestures; the paycheck is just too good to dismiss. Does Wynn, who remains deliberately vague in management meetings and on-screen interviews, know something more than he is letting on? The movie suggests so, particularly with the minute details: the actors are always required to have someone with them when they wander the long halls and passages, and no one can stay overnight. Because those were two of the primary vulnerabilities exploited in the victims of the first two films, that casts him in a different light than his poor predecessors, who were too driven by greed and ego to see the reality of a brewing nightmare.

Russell is played here by Gabriel Chytry, a novice actor whose credits mostly involve independent short films. He does a very convincing job of creating a modulated man of mystery, without relegating him to all the conventional quirks that usually follow these token horror film odd balls. The screenplay, furthermore, matches his pitch with details that provide intriguing backstory glimpses, including a critical explanation as to why he has a long scar over one of his eyes. In many ways, it also underlines the motivation for what is otherwise perceived as a fool-hearted agenda. Others, including a site manager named Jeff, are there to be the voice of reason but are sometimes caught up too much in the mission to pay heed to mysterious predicaments. The most notable: one of the actors is dared by her colleagues to go into the dark house at night, wander into the basement and touch the nose of one of those mysterious clown mannequin props left behind from the original haunted house. When she does so, her handheld camera catches a glimpse of something horrifying, leading to a rush through the dark that is delightful: Cognetti, emphasizing his own organic style, stages the moment without elaborate visual effects or thumping musical chords. When the footage is viewed by bosses the next day, they play off the situation as a prank. And when the victim threatens to walk away from the production, Russell doubles her salary.

One of the film’s more effective editing touches is also a sound one. Because so much has transpired in these walls over the last several years and over the course of two busy pictures, viewers distant from the experience might need refreshers. “Hell House LLC 3” wisely backtracks important events; when people discuss old players or muse over the mysteries left behind, the movie flashes to the old footage in order to show what transpired. Why is this a good call? Because it dismisses the need for long exposition. Too much rehashing would weigh the experience of the present down, especially in a found footage vehicle involving impending doom. Think, for example, how this trend has disrupted the momentum of sequels like “Blair Witch” and “Paranormal Activity 2,” which relied so heavily on prior events that they played more like remakes than follow-ups. Would anyone watching on here really be invested in the terrors of another tragic opening night if they were distracted still by the forgotten points of the earlier pictures?

Inevitably this all leads to more mysterious encounters, more glimpses of casual horror on set, more unheeded warnings and, eventually, to more chaos on the obligatory opening night, when the house will be filled with innocent bystanders while a devious energy seeks to devour them. Unfortunately, like most young directors who are fearful of alienating the loyalists, Stephen Cognetti abandons the a more careful and observant trajectory in order to tread back to a juvenile one for a very uneven climax. The wrap-up, if you can call it one, tries to be too many things: rational, thorough and optimistic. It is also badly staged, primarily because of a CGI gimmick that looks light it would be more at home in a bad 90s music video. Why the cop-out now, especially given how little his series of films has depended on the need for elaborate special effects? It could be indicative, alas, of a mind that been polluted by the notion of extended budgets and computer enhancements.

Simultaneously, there is a creative sickness that routinely disrupts the momentum of newer storytellers, most of whom have been taught to spend all their energy on framework and pacing without understanding how it all must end first. Cognetti’s problem is more focused than underwhelming. He is too afraid to leave a question without an answer. He uses ridiculous confrontations, lousy explanations and a shamelessly uplifting ending in order to neatly tie up loose ends, that way no one leaving the movie will walk away with any doubt as to what exactly was going on all along. That approach, alas, undercuts the entire goal of the great supernatural horror films, which persist in the mind because of the doubts they allow to linger on. That is not to say “Lake of Fire” is entirely worthless, mind you; the first 40 minutes are in the great tradition of the original, without being overwrought or crammed full of excessive exposition. But in the final frames, after enduring what amounts to the bludgeoning of an entire idea, one can’t help but wish the more thrilling original film was playing on screen instead.