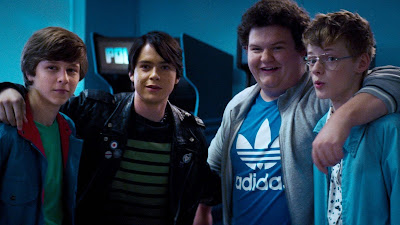 How does he become so convinced that Mr. Mackey, an otherwise pleasant man, is the villain of this unsolved string of crimes? An early scene establishes the obligatory seed of doubt. An evening game with his peers ends with Davey glimpsing a red-headed boy in the man’s window; later, that same innocent face is splashed across a milk carton, ominously asking for tips leading to his safe return. Other coincidences snowball. The cop is seen purchasing large quantities of soil, sometimes with instruments like shovels and pickaxes, but never returning home with them. He goes out at night and disappears… into a private storage space? And when young Mr. Armstrong is asked to move furniture in the man’s basement during an afternoon pass-through, he observes a suspicious door padlocked from the outside. What are the secrets behind those places, if any? The boy’s three wisecracking friends come into this probe in the same manner that the young protagonists all persuaded one other to search for a dead body in Rob Reiner’s “Stand by Me” – by convincing themselves that besting police to the punch would make them celebrities in the eyes of the community. Ego, fortunately, is more concrete than danger when it comes to kids in movies like these, otherwise their adventures would be too morose and sullen to convincingly excite the target audience.

The four boys are played with gusto and plausibility by Graham Verchere, Judah Lewis, Caleb Emery and Cory Gruter-Andrew, in roles that do a good job of showcasing their individualism. Davey (Verchere) is not so much the sensible voice as he is the one who just knows how to talk his way into situations that seem logical. Tommy (Lewis) is lured by temptation but often won over by simpler explanations. Dale (Emery) harbors fears that he is willing to stifle for the sake of joining in on the consensus. And Curtis (Gruter-Andrew) happily spouts crude one-liners in order to conceal the pain of a troubling home life. These are four of the more conventional prototypes to feature in a movie with this sort of gloomy periphery, but the appeal of such stories, you could say, comes down to forcing growth on otherwise-juvenile personalities. Consider how King did it for the members of the Losers Club in “It,” or how the curious adventurers in “The Goonies” are swept up by the fright that comes with setting off ancient booby traps. A hunt for a madman is much more serious a premise than, say, searching for a pirate’s treasure, but the sentiments are the same: sooner or later, all individuals hovering around puberty are asked to transition to adulthood by the means of some traumatic encounter.

“Summer of 84” claims not to be based on any real event or circumstance, but does a painstaking job at replicating the underlying frenzy of suburban youth in those tense early 80s summers, when most adolescents were enamored by the blood spatters of “Friday the 13th” and “A Nightmare on Elm Street.” For Davey, Tommy, Dale and Curtis, they are like members of a dead teenage film working against a fate that is lurking nearby, and Mackey is playing the masked madman hiding under the bed. Yet the movie casts doubt on the certainty of these details, I suspect, to test the stamina of us more seasoned viewers. Is this all, in fact, just a case of four boys letting their imaginations run wild, or is young Davey onto something? The movie plods along excitingly as this becomes the key riddle. Sometimes that means buying into the case with the heroes, particularly when they catch a glimpse of something rather suspicious. Why, for instance, does Mackey have a car stashed in his storage shed that no one knows about? What of an MTV t-shirt in the man’s tool shed out back, containing a splotch of blood? Did it belong to the kid who went missing, or is it, in fact, a matter of mistaking details to fit a more sensational narrative? By the time the picture arrives at some of its initial explanations, they are sound enough to imply that everyone has been led on a mistaken assumption.

But then the movie throws a curve ball in the final act, setting a tone for a climax that is far bleaker than we could have expected. When it first premiered at a few small-scale festivals in 2018, that ending did not test well; some critics felt that the material diminished the entertaining thrust of the earlier half, while others called it a tone-deaf cop-out. As that audacious third act has settled on some minds, the consensus has softened, and now one could say that its most loyal viewers hold it in high esteem precisely because of those open-ended final minutes. The first time I saw the scenes, I was stunned, both by the nerve and the degree to which the filmmakers are willing to stretch the moral gravity of their premise. Yet no one can call the resolution conventional, either. In a time when even the more transgressive horror films are cast in a mold that depends thoroughly satisfying wrap-ups, “Summer of 84” argues that the more resonant finales end with a stroke of uncertainty.

The movie was directed by Francois Simard, Anouk Whissel and Yoann-Karl Whissel, a trio of newer filmmakers whose own “Turbo Kid” seems already destined to become a modern cult classic. History may not be as generous this time around, no doubt because of how closely the film’s style parallels the very successful “Stranger Things” series. But their ambition is admirable and risky, at a moment when cinematic creative energies have little urge to walk the slackline between black and white. One does not walk away from “Summer of 84” feeling bored or disinterested. It creates a reaction. There were moments when I was roused by myriads of sly wit, suspicion and even shock, and others when I felt sad for kids who might have endured better by leaving the searches to others. But a solid case can be made for the ending, which emphasizes the whole nature of the film in miniature. What you perceive is rarely what it all amounts to as time marches on, but the challenge is a gate that only some are capable of passing through.