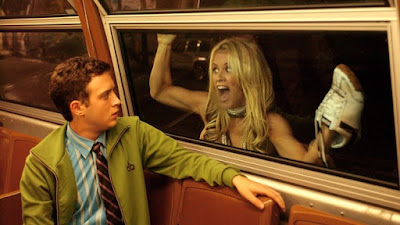 How terrible is the experience of enduring this, a film so bad that it even beat out the likes of “Alone in the Dark” at the Razzies? Allow me to illustrate the experience. There I was, seated in front of a screen for 91 minutes, watching on defensively as innocent faces moved through this material with all the finesse of an opera singer holding a chainsaw. Occasionally, people would stop long enough to shoot pained glances at each other, as if quietly pleading with others to be rescued from the ordeal. But alas, no relief comes; each moment, more unfunny than the last, is a record of underachievers who are so far in over their head that they have lost the will to break the chains of their prison. And somewhere among those long minutes of bad dialogue exchanges, tired setups and almost offensive portrayals are audience members who are nearly weeping in resentment. Is it possible to laugh, even unintentionally, just to break the monotony? Or some way to gleam a silver lining from an otherwise worthless storm cloud hanging over us? This is the type of experience that actors discuss in tears when they reflect on the mistakes of their careers.

Take any two moments of the material on screen and you begin to wonder what sort of pitch could convince anyone to provide funding. The premise is utterly basic: Rebecca Sommers, a “professional photographer” with wild hair extensions and a generous plunging neckline showing off tanned breasts, has just broken it off with her promiscuous model boyfriend Richard (Victor Webster) after catching him gyrating heavily in their bed with a stranger. This, we soon realize, is a total shock to Rebecca, who has always believed he was a faithful soulmate; unfortunately, subsequent encounters, usually while she is on the arm of someone destined to embarrass her, show him keeping company with more women than the Playboy mansion. It is a sentiment echoed simultaneously by Carrie (Kam Heskin), her ditzy best friend, Michelle (Carmen Electra), a smart-ass beautician, and John (Eddie Kaye Thomas), the assistant who is secretly in love with her. Everyone in that sphere knew Richard was bad news well before the truth came out, of course, but Rebecca’s heart put up the same stubborn blinders that have become a staple of all naïve romantics. And now the trio of sidekicks have vowed to assist their grieving friend through a tumultuous time while she rebounds, lashes out, seeks to inspire jealousy and gets caught up in more hijinks than the Three Stooges.

The first mistake: McCarthy’s Rebecca Sommers possesses the mental capacity of a cockroach. So many of her embarrassing situations – and there is a lot of them! – depend primarily on her lack of rational decision-making, so that when she becomes the victim of projectile vomiting or accidental cavity searches, there is no joy in the discomfort; we simply observe without sympathy, occasionally with eye rolls. That she doesn’t learn or observe anything resembling common sense until the very final frame is also unwise: the screenplay, which McCarthy wrote after having slept through every writer’s workshop that Hollywood could offer, is displaced from the notion that effective comedy, however outrageous, should play like a journey of perspective for those in the foreground. McCarthy’s answer is to execute the material as if her heroine is the counterpoint of Darwinism. The most noteworthy example: if you are a woman who has just started your period and your friends have not supplied you the correct hygiene products, would your solution be to send one of them out for you to retrieve them, or go into a grocery store yourself while the blood is gushing from your groin? A scene that could have inspired a howler of a laugh in the right setup instead feels like we have stumbled in on the world’s most overzealous crime scene.

The long rebound plays like a series of failed encounters with aged virgins. Here, Rebecca hooks up with a guy who finds odd uses in the bedroom for fish, a man who vomits on her breasts after he has become sick from her perfume, a would-be magician who gets her in trouble with the law after explosives are found in his trunk, and a random stranger at a party who attempts to perform aggressive oral sex (“It’s not bubblegum. You can’t chew it!”). What do they all mean, if they don’t provide the desired result of inspiring jealousy in an otherwise uncaring ex? Why, to propel her towards another discovery: that her own assistant may, in fact, be the one she is destined to be with. This would be a cliché for any ordinary romantic comedy, of course, but “Dirty Love” is too dimwitted to have foresight; instead, we get an unnecessary scene in the beginning where Rebecca has it all spelled out for her by a psychic, who suggests that all the answers lie in one-note symbolism. How unfortunate that the fortune-teller couldn’t also inform her that she was about the partake in one of the worst movie comedies ever made.

Besides being a prominent staple of the 90s MTV scene, Jenny McCarthy’s claim to fame has been part-time hosting appearances on daytime talk shows, guest spots on sitcoms and the occasional public speaking event, where she continues to rage against the concept of vaccinating children. If those are warning signs for any sort of career that could follow on film, she has certainly matched the trajectory; her mere presence on screen is barely distinguishable, so that when she shows up in any number of awkward situations she looks more like a bystander mugging for screen time than the actual star. Her female peers, meanwhile, have the dubious distinction of playing into the hands of a screenplay that sees them as cartoons more than human beings; Kam Heskin meanders through dialogue that makes her lack of intelligence too obvious for even shallow laughs, and Carmen Electra is so insufferable as a ethnic caricature that it’s almost offensive. Did McCarthy not think about any of this before her pen touched the paper? What of Asher, who was her husband at the time; did he not feel the need to intervene? Did he really see this performance as something audacious, even in the context of edgy political incorrectness? Reportedly, their marriage fizzled only a few weeks after the movie premiered, where it barely scraped the bottom of the barrel at the box office. One wonders why: being utterly tone-deaf, after all, is a lot for two lovers to have in common.