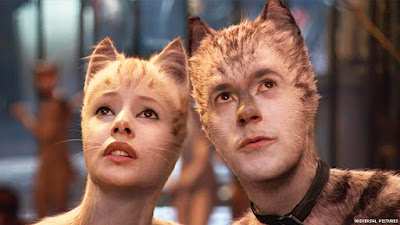 We as moviegoers are used to the offenses of filmmakers who rely too heavily on subpar visual effects. I am reminded of a handful of dubious blockbusters of the recent past, where CGI has been modulated to totally eviscerate the plausibility of ambitious visual ideas. “Battlefield Earth.” “Lost in Space.” “The Last Airbender.” “Van Helsing.” “10,000 B.C.” These remain templates for technical wizards who strive each day to rise above their underachieving peers, who seemed more interested in cashing paychecks than applying a crisp aesthetic to the products they were marketing. And somehow those who were behind “Cats” can hardly be considered underclassmen, either. Christopher A. Dalton, one of the movie’s chief visual technicians, was in the same role for the most recent “Avengers” pictures, which no one could accuse of being half-hearted. Simon Davey, also on staff, was involved in the production of “Prometheus,” while Maxfield Hemmett is credited for the recent “Overlord.” These are players in a game who come prepared to work, and do so on the fine edge of the craft. So what can be cited as the primary blame for their work in “Cats,” among some of the worst CGI ever released on the big screen? Was their budget too constricting, their time too limiting? Were they working without guidance, set adrift in a composition where no exact rules could be established? Their failure becomes one of the great mysteries of a film that seeks to inspire our loathing for nearly every frame it sits on the screen, and that is before we even attempt to decipher the mediocrity that is the music or the nonexistence of the story.

My knowledge of “Cats” is limited to vague glimpses from past encounters on home video and internet image galleries, but this much is certain: the musical, one of the longest running in the history of the theatre, was a hot commodity because of the intricate nature of the makeup and costumes, which transformed ordinary actors into agile vessels for the dexterous choreography. For this film translation, director Tom Hooper began with a similar conceit: portray the content with living actors in the roles of the characters, then alter them digitally in post-production to replicate that illusion. The key mistake in his observation: cats are confined to a limited number of sets on stage, where their sense of scale cannot be confused. Now imagine seeing the same beings moving in multi-dimensional environments where they never seem to match the size and perspective of their surroundings, sometimes appearing smaller than a foot stool and at other times as high as a balcony’s railing. Seeing the repetitive inconsistency of this standard recalls the validity of the great warnings of Robert Bresson, who believed that theater would pollute the nature of film more than enhance its value.

The story, if you can call it one, is basically a series of musical episodes that are barely held together by a thin line of reasoning. In the opening scene, a bag is tossed over a fence and into a dark alley at night in the city, where it is quickly surrounded by awkward-looking humanoid felines. Inside the sack is one Victoria (Francesca Howard), a white female cat who has been abandoned to the streets, now taken up by an ensemble of musical and agile peers who will show her all the key locales in the back alleys of the big city. They are the “Jellicle Cats,” a wise elder cat played by Judi Dench reminds us; early on, they are established as a vague order of loyalists who shun any of those associating with rebellious cats, including Macavity (Idris Elba), whose eyes are fluorescent green and can disappear into a shroud of smoke at will. Is he magic? Or is this just another unspoken facet of the musical’s loose-ended fantasy? Never mind. Victoria soon finds she has more to contend with than fitting in with a faction of singing and dancing alley cats, including disavowing all association from Grizabella (Jennifer Hudson), a sad elder cat who is hissed at whenever she comes near, and Macavity, who kidnaps a host of other cats played by the likes of James Corden, Ian McKellen and Rebel Wilson – for what purpose, your guess is more educated than mine.

Somewhere in the wall-to-wall musical numbers, the movie establishes a hook: the great elder Deuteronomy (Dench) is tasked to send one feline into the skies where she can be born into a second life, and others must audition for the chance to be chosen. Of course they must. Lloyd Weber’s schtick of conveying every key point through repetitive melody is established ad nauseum here, where all the obligatory familiar faces indulge in solo musical numbers that paint them as sad, desperate nomads in search of something better than the life they have. The bigger, offense, perhaps, is how Hooper chooses to execute the more lighthearted moments. It is clear, of course, that Corden and Wilson were cast in roles that emphasized their comedic skill, but what is the purpose of surrounding them in such cartoonish pomp? Corden looks like a man with fur glued inconsistently on his face, while Wilson is asked to spend nearly an entire sequence rolling around in sexual poses while dancing cockroaches and mice fill the periphery. And if you think the shoddy CGI on the hands and feet of the actors is bad, just take a gander at some of the faces imposed onto the dancing insects: they are so obviously half-assed that a more convincing illusion could have been achieved by pasting magazine heads onto construction paper cutouts.

Hooper is hardly a novice to this medium. His prior credits include “The Danish Girl,” about a man who discovers himself through life as a transgender, and “The King’s Speech,” which went on to win Best Picture. Both films were well-regarded, which only highlights just how amiss his decision-making is here. Did he learn nothing from “Les Misérables,” which was at least competently made, however overblown? My guess is that he was too drawn to the fantasy of the stage production for him to sway far enough from the aesthetic. A more self-aware voice would have detected the impossibility of this premise, set against a backdrop that required too many vague variables. Cats played by humans are a novelty on a stage; on film, they are invitations to an inconsolable mess. For the life of me, I also could never figure out why all of them danced as if they were in heat, either. Was Hooper trying to suggest that cats are their most inspired when they are feeling sexual? Or is this how he perceives the species? The innuendo is almost jarringly out-of-place in an otherwise emotion-driven movie musical. On the other hand, the movie makes history in one regard: once you remove all the terrible visual effects, “Cats” is basically the first softcore porno ballet ever filmed for the big screen.

Hmm, the VFX on the characters are really pretty good. Granted the mice and roaches were bad. Also, everything is CG pretty much except for their faces and maybe hands. Motion tracked. The problem is the music, the story, the choreography, and the characters. The lack of story could have been forgiven if the music would have been amazing.