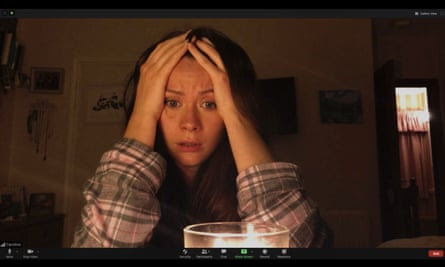 Any discussion we can have about “Host” ought to begin with the genius of its timing. Made on the cheap, conceptualized in isolation and filmed entirely on web cameras during the recent Covid-19 quarantine, director Rob Savage took an idea previously used in the “Unfriended” series and spun it on its head, using it to an advantage that reflected this strange and frightening time of social distancing. All its stars, situations and setups are executed in a way that involves no one ever being in the same room with one another, although their cellphones and computers are all functional when they are haunted by a malevolent spirit moving between them. How does it come to be, and how do the six key players of the movie summon it on an evening when their remote gathering progresses into a gradual, unrelenting nightmare? That is part of the fun in this well-made little “found footage” picture that shows remarkable skill and modulation given the urgency at which it was formulated and released. Now available as an exclusive on the Shudder streaming service, Savage has breathed refreshing new life into a sub-genre that has long been floundering for new inspirations.