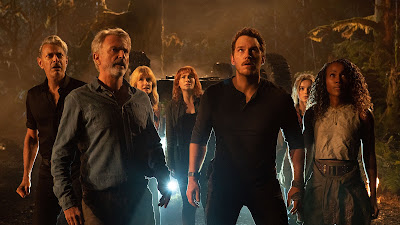 In many ways, you have to grin gleefully at the great audacity of Colin Trevorrow’s “Jurassic World: Dominion,” a movie that feels less like a fatalist dinosaur picture and more akin to chase capers like James Bond or Indiana Jones. Not content to center the action on any sort of enclosed setting, his premise sets us up for all the big obligatory tropes of modern blockbusters: lots of locales, intersecting casts, intrigue, big secrets beneath all the hurried dialogue, tugs of old nostalgia, uncertain villains, climactic twists overloaded on coincidence, seemingly unrelated narrative angles that can be shoe-horned into the broader arc, and wide-scale action sequences that bookend every detail. Oh, and then there’s the dinosaurs. Some are old, others – many others – are new. You almost expect that of a series that has become saturated in wall-to-wall ambushes with the prehistoric monsters, but rarely have they been so numerous, or indeed so accessible. Yet our eyes can barely keep them straight as their prospective prey shuffle between locations ranging from Malta, the Heartland of the Americas and even to the snowy peaks of a forest reserve in northern Italy. That might have been forgivable in a story more focused on a single purpose. Such a story was probably lost in very early drafts of this convoluted screenplay.

How did it all go haywire? Where was the moment when this idea swelled beyond controllable chaos? Perhaps it’s all a matter of the clashing values of movie eras. When this series began, the enormity of Michael Crichton’s literary idea was anchored by the steadier hands of filmmakers of the pre-Marvel Hollywood, before manic editing and long-winded narrative structure overtook the momentum of mainstream action. Those movies, to their credit, paused long enough to gaze back at the material with some sense of joy. But gone are the sensations of the impossible, the awe of the dinosaurs that inspired them. They have been rendered superficial props in premises that let them wander without borders among the ordinary population, who exploit them in black markets and hunting parties for the sole purpose of setting up ambitious chase sequences. Some of them, admittedly, are pitched with skill. Consider one in which characters are attempting to safely land a helicopter inside the dinosaur refuge, but their protective radar fails, and the flying lizards proceed to disassemble the vehicle in mid-air. The scene could have been photographed and edited to the point of desensitizing nonsense, but Trevorrow is surprisingly fixated on the intensity of the moment. He has an eye for this sort of sensation. If only his story didn’t allow it all to be circumvented by nonsense.

The film opens well after the climax of the last, where the dinosaurs have no taken to throwing off the food chain after being set loose on the mainland. A new species of mutant locusts begins terrorizing crop fields in the North American heartland, an apparent phenomenon that can lead to widespread famine as the food chain suffers irreparable damage. Is that intentional? Or just nature descending further into chaos after the return of the dinosaurs? Ellie Sattler (Laura Dern) suspects the masterminds of Jurassic World are somehow behind the matter, and that leads her to the guiding hand of old friend Alan Grant (Sam Neil), who is still digging up old fossils in the desert – primarily, we deduce, because it provides him an escape from the madness of the world outside.

Their prospective collaboration is instantly fueled by all the redundant curiosities of Ian Malcolm (Jeff Goldblum), who initiates contact with them about the locusts while he is lecturing for Biosyn, the corporation that owns the wildlife reserve that now protects most of the captured dinosaurs (convenient, eh?). Their venture to the reserve comes attached with all the obligatory touches of nostalgia, but few are the moments in which they can reminisce over their adventures at Jurassic Park. Just beneath their feet, in a random laboratory they gain access to with the help of an inside leak, the prototypes of the locusts are resting peacefully in their temperature-controlled habitat, just waiting for the inevitable moment when they are disturbed by Ellie and Alan and set loose. What any of this fundamentally has to do with the dinosaur arc is anyone’s guess, but hey, when’s the last time you saw a fifth sequel so willing to go for broke?

Meanwhile, the primary characters of this more recent trilogy continue their long exile in the unknown, fueled by their possession of Maisie Lockwood (Isabella Sermon), the genetically engineered granddaughter of John Hammond who was introduced in the last film. Her present existence is propelled by two certainties: 1) the villains need her in order to understand her genetic code, and 2) both Owen (Chris Pratt) and Claire (Bryce Dallas Howard) know how important it is to keep her hidden. Angsty teenagers, alas, are rarely content to stay concealed in the wilderness, and somehow she manages to wander into the crosshairs of bounty hunters hired by Biosyn, who whisk her away while her guardians give chase. A more straightforward script would simply take her directly to the culprits. “Jurassic World: Dominion” provides her a travelogue of randomized set pieces, just for the sake of adding in additional supporting characters. The most notable: a rebel pilot named Kayla (DeWanda Wise), whose loyalties are vague only as far as the story takes them; after a long chase scene involving bloodthirsty raptors from the black market of Malta, her allegiance comes around to Owen and Claire, who request transport back to the reserve to stop whatever awaits Maisie in those underground labs.

Eventually, of course, both stories must converge. That’s the way it all works now in this time of “Avengers”-style action epics: all the key characters and their varying unrelated conflicts must share a moment where they come face-to-face with one another, partake in a long-winded dialogue about their binding hatred of corporate scientists, discover their common enemy and then unite in one ambitious plunge to a climactic encounter with the overzealous antagonist.  Traditionalists would argue a villain was never needed, that the greatest enemy in a park overrun with engineered dinosaurs is the arrogance to assume they ought to be brought back in the first place. You know and I know it, but something about that conclusion has been lost in the translation. What we get here, instead, is a corporate shill named Lewis Dodgson (Campbell Scott), who spends most of his time wandering through white hallways and sterile board rooms looking important while barking orders and waxing fatalistic with Henry Wu (BD Wong), who drones on morosely about his part in the decline of present civilization. Where was the inspiration in this screenplay? The nerve to draw a dimensional figure at the head of all this anarchy?

I don’t know whether to blame the writers or the editor for the offense that is the movie’s final twenty minutes, where all comes crashing down as the locusts are nearly incinerated by Dodgson, escape into the atmosphere, burn the nearby forests to a cinder, frighten the dinosaurs into flight, inspire conventional outbursts and encourage the mastermind of it all to… flee through a dark tunnel alone in the dead of night while dinosaurs are lurking around inside? The movie robs us of a critical thematic underline. It’s all thoughtless action – sound and fury, signifying nothing. On one hand, you can probably accuse the script of short-changing us when the momentum is there for a juice final confrontation. But what if it was actually shot, then just cut out for the sake of time? At a lengthy 147 minutes, with a prospective “extended” version coming sometime later this year, one wonders exactly how much missing exposition is floating around on the cutting room floor. Is there a more sound reasoning in those missing minutes? Something that could have justified the divergent plot paths a little better? The movie is a rare glimpse into the hazards of overthinking one’s concept without actually explaining it coherently.

The ending, likewise, is a cop-out, especially when you consider how it is touted as the proposed “final chapter” of this saga. I call baloney. It’s not just a matter of an open-ended plot that is irritating, either. Pay close attention to the voice-over occurring in those final shots, and think to yourself what it all comes down to. Somehow, in some absurd way, Trevorrow is playing the role of the dimwitted idealist, driven by an illogical rationalization that violates the very core of what drove this story in the first place. I wonder what Crichton would have thought of the monologue, had he lived long enough to hear it. One wonders if he might have regretted penning the source material if he knew how it would go so elaborately wrong.
Written by DAVID KEYES

Action/Adventure/Sci-Fi (US); 2022; Rated PG-13 for intense sequences of action, some violence and language; Running Time: 147 Minutes