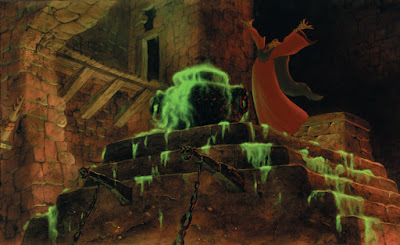 While I have no doubt in my mind that Disney's studios regret doing "The Black Cauldron," one of their biggest commercial flops ever, the movie is a visual, enriching triumph, an energetic and ambitious animated tale that recalls the magic of "Snow White" and "Pinocchio." The characters are odd, the animated techniques are ingenious, and it all serves a purpose in reminding us that even today's feature-length cartoons don’t compare to the brilliance of hand-drawn animation.

"The Black Cauldron" follows the tale of a young boy named Taran, who dreams of becoming a great warrior in the mythical lands of Prydain. He finally gets the chance when a psychic pig named Hen-Wen prophecizes the Horned King (the most ruthless creature in all the land) searching for the mythical Black Cauldron. This is the source of power in all their world. Since Hen-Wen can predict where it is, she is extremely valuable to the Horned King, and she fears he will soon come looking for her.

This requires a little explanation: this Cauldron, as the Horned King discovers, can created endless undead armies that are capable of destroying worlds. With the Cauldron in his possession, he can literally take over all of Prydain with his soldiers of 'the cauldron-born.'

As Taran discovers this, he feels it to be his duty to reach the black cauldron before the Horned King can get to it. The movie sets this up as a series of quests across open lands, leading to the place where the cauldron lies. Along the way, the hero meets two intriguing characters: the beautiful Eilonwy, and the cute Gurgi, both of whom he does not seem to get along with until things become grim.

In most ways, these characters reflect the values of some other Disney animated features. Taran is an ambitious young lad, who seems curious foolhearted, much like Pinocchio. Eilonwy possesses the traditional values of the fairy-tale princesses that Disney brought to us in "Snow White" and "Sleeping Beauty" The annoying Gurgi brews up mischief with Taran: once by stealing his apple, and again by fearfully backing out of a trip with Taran to the Horned King's castle; he has the same plucky element as Thumper. You'll often see a guy named Creeper on the screen, too, and though he is not the most memorable, he is the perfect henchman for the Horned King, who must eventually blame him for every problem that goes wrong. How can you not think of Sir Hiss from "Robin Hood" in this case?

But most of our attention is focused on the Horned King, who is menacing in every sense. He doesn't speak much in the film, and his character development is not as strong as it could be, but he looks and acts like he's among the great Disney villains. He absorbs his audience with the brilliance of a dark voice and silhouetted face. Watching him, you begin to admire the energy of the animators when it comes to their villains.

I imagine that "The Black Cauldron" failed at theaters because it was seen as too dark and grizzly, but if you think about it, is it any more dark and grizzly than "Snow White" and "Pinocchio?" Those films were frightening and creepy enough to cause younger audience members to shrink down in fright. Yet no one talks about those traits as problems now.

While "The Black Cauldron" is not among "Bambi" or "Beauty and The Beast," it does impress enough to be worth repeat viewings. At long last, thanks to a new release on home video, that has become possible.