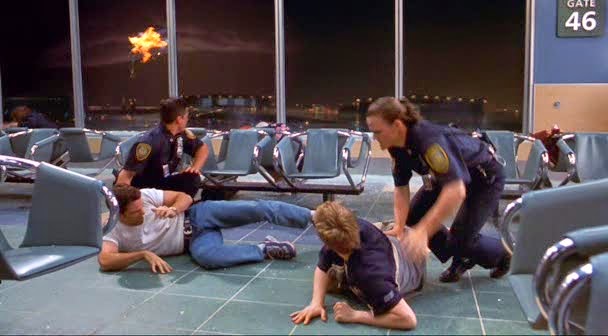 Here is an occasion worth noting: I find myself actually recommending a new teen horror film that hasn’t been directed by Wes Craven. “Final Destination” is the product in question, a surprisingly effective little picture that delivers what so few thrillers have done lately: a well-written script, interesting characters, psychological thrills and unconventional directing. Several will be fooled by the fast-paced trailers and television spots, though, which try to promote the movie as a slasher flick. Hardly the kind of vehicle that uses a Jason Vorhees or a Freddy Krueger as a ruse for bloodthirsty teen moviegoers, “Final Destination” makes a villain out of the one being everyone fears, but no one can confirm the existence of: Death himself.

The day of your demise a moment of celebration for him; he hungers for your soul, waiting and watching for the moment when it slips out of its body and is captured by his hands. The characters in “Final Destination” are all items on the Grim Reaper’s checklist, who have swindled fate, miraculously, by following a paranoid classmate off of an airplane just minutes before it enters the air and unexpectedly explodes. The classmate in discussion is named Alex (Devon Sawa), who has a vision of terror while aboard a plane preparing for takeoff towards France, and immediately demands to be removed from the cabin. He isn’t simply being superstitious, though, as the plane itself is destroyed in midair just like he had envisioned. The survivors realize that, what they have just done, is cheated death.

The scenario escalates immensely as the youngsters appear to be sentenced to death despite their last-minute evasion (it is always said that fate will bite back if you try to maneuver it). Alex himself, who may be psychic, has more visions showing the surviving classmates meeting their quietus. Many of the death scenes themselves are like chain reactions right out of the old Looney Tunes shorts, but they work well because of their solid atmosphere. Director James Wong and his cinematographer, Robert McLachlan, have worked hard to establish an eerie mood all through the picture, starting with an extremely chilly sequence in which the explosion of a plane is observed from where the passengers are seated. These are the types of movies that have practically no chance of being shown on screens aboard actual airlines.

Where the movie begins to lose its energy is towards the end, when the eerie mood is abandoned and the death scenes become so ludicrous that one can’t help but laugh at them. The final moments are the most unsettling, because no one is able to decide whether the foolishness of the conclusion should be accepted as terrifying or humorous. In addition, few of the characters are distinguished from one another. Yes, they are smarter and more interesting than those of the average teen thriller, but they could have been a little more sophisticated regardless.

Nevertheless, much of the substance is quite effective. The movie is so neatly packaged that it even deserves comparison to the “Scream” pictures, which, too, tried to be both scary and humorous. And yet the similarities end there; Wes Craven’s famous trilogy is a slasher comedy that shares parallels with the real teens who watch scary movies. “Final Destination” contains practical and quirky individuals, but the concept of Death stalking those who cheat fate is questionable despite some of us believing in his existence. Essentially, though, that’s what these kinds movies are meant for in the first place—to step beyond the universal limitations and interpret superstitions as if they were elements of reality. “Final Destination” exhibits this capability very successfully, and survives a swarm of recent horrible thrillers by being the only one willing to scare us using psychology rather than gratuitous gore galore.