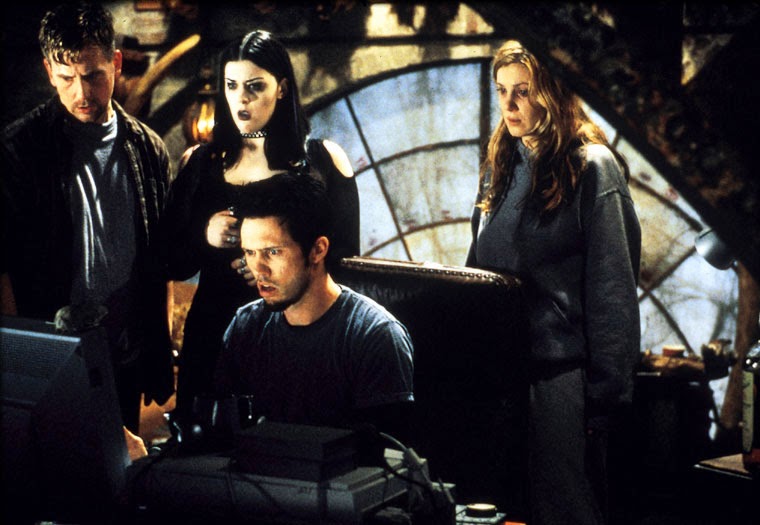 It would be easy to denounce “Book Of Shadows” as merely an excuse to make a further investment off the popularity of the Blair Witch, but that would be an unfair conclusion for two reasons: (1) cashing in on the public’s demand for more would have likely lead to a sequel of directly similar substance, which this movie demonstrates little of; and (2) all new ideas at least deserve an opportunity to be tinkered with by other filmmakers in the industry. Such notions are the impelling influence behind this highly-anticipated follow-up to last year’s sleeper hit, and though this isn’t a movie with enough redeemable features to be leveled with the original, it is, at least, still a mildly engaging horror flick with enough tension and energy to work up the audience.

Keeping with tradition, the movie uses unfamiliar actors, all playing characters with their real life names, as the victims of a supernatural gesture. At the opening of the movie, interviews are conducted with residents of the now-commercial Maryland town Burkittsville, who are both amazed and annoyed by the buzz in their community generated by the admirers of “The Blair Witch Project” (an older woman in the interview sessions, though, reveals that she has made a killing by selling artifacts right from her back yard to tourists passing through town). One resident to capitalize off the success of the movie is local boy Jeffrey Donovan, who runs an expedition called “The Blair Witch Hunt” for gullible excursionists who need a tour guide to take them through the woods and investigate the locations shown in the first picture. Donovan is actually a former mental patient, as displayed by staggered flashbacks, and that adds a sense of foreshadowing to the situation: four people who he has recruited for this journey enter the woods with high hopes and ambitions, but by the time they leave, have fallen victim to strange visions, body marks that appear without warning, and supernatural manifestations that cripple their confidence and add to the panic of an already-questionable experience.

The characterizations offer some intriguing diversity, too: Stephen and Tristine, a couple who are writing a book on the mass hysteria created by the Blair Witch phenomenon; Kim, a woman who dresses in all black and is tired of all the negative stereotypes generated by her appearance; and Erica, a modern Wiccan who believes the first movie’s stance on witchcraft has set her religion back 300 years (Wicca, as it should be noted, is an earth-based religion that the masses unfairly associate with evil practices). The movie juggles these personalities with a sense of clarity and distinction for a brief while, developing them into the independent specimens needed for any solid horror movie. It is a task, alas, that strays off direction once the visuals kick into overdrive: the film then can’t seem to decide who the real main character is, and we find it increasingly difficult to sympathize with any of them as single entities.

The events that the five encounter are almost just as muddled. After spending a night in the woods, most of which they have blacked out, our five energetic travelers begin having all sorts of premonitions depicting unrelated variations of torture and death, sometimes flashing them on screen so fast that we can’t tell what they are without a repeat viewing. It is the immediate assumption that something supernatural has descended on the lives of these individuals (after all, they are dealing with places where a witch may have actually existed), but none of them ever seem to realize it, even when one character has dreams through the eyes of the entity herself. Those realizations don’t actually surface until the climax of the movie, which, despite being inconclusive of evidence that the Blair Witch actually exists, is very unexpected and satisfying.

Why is the movie titled “Book Of Shadows,” though? The only link I can establish goes back to Erica, the Wiccan, whose religion uses this term for the journal which her people use to keep track of spells they have cast (or something to that effect). There is no direct reference, however, leading the viewer to wonder: what exactly are the filmmakers trying to say with this attribution? There is a lot more to dislike about “BW2”—the visual gimmicks seem a little fragmented, for example, and undermine the plot—but few of the quibbles will interfere with the big factors here: the movie is well shot, has a solid pace, is energetic, and establishes an effective atmosphere. The movie works, if not as a sequel to a much greater endeavor, then as a vehicle of mild thrills for audiences in the mood for something to satisfy their thirst for Halloween horrors. Just don’t expect to see a masterpiece, though.