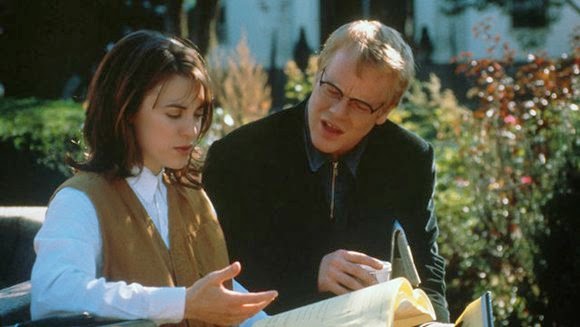 Small-town America has proven to be one of the easiest targets for comedic exploits in the movie industry, and no wonder: the idea that an isolated, close-knit community occupied by people who know the names and affairs of nearly everyone else in town could be turned upside-down by scandal, commercialism or similar issues, seems to open up the floodgate for enormous potential. The principal merit in such an endeavor is not usually the plot itself, however, but the colorful characters involved, who tend to be portrayed by the most unlikely actors and are generally conceived with bizarre identities and questionable personal values in mind. Need examples? Think for a moment about the quirky ensembles of "Fargo" and "Mumford."

"State And Main" opens under this canvas of reasoning, as a movie crew descends upon the small rural village of Waterford, Vermont, having been kicked out of their New Hampshire location, in order to complete the shooting of a movie titled "The Old Mill." Their abrupt arrival is not without obligatory skepticism: if residents aren't complaining that Hollywood's arrival will commercialize their community and overshadow local events, they're using every breath they have to land some kind of involvement in the picture itself. The crew of filmmakers have their own problems to deal with, though, like a limited shooting schedule, a shoestring budget, and a proposal for a product placement of an Internet web site that would help the studio's revenue, but seems useless in a movie that is taking place in the 19th century. There are also severe rewrites for the crew to contend with, especially upon learning that the old local mill, the prime visual necessity in their picture, was burned down 40 years ago by a local kid on an arson rampage.

Needless to say, all of these incidents shape into a plot bleeding over with mind-numbing complexity, as a small town is torn into fragments when both residents and crew members cast a dark cloud over the entire future of this production. And yet under this much narrative pressure, "State And Main" manages to be one of the most brilliant films of 2000: a satirical, edgy and sweet comedy in which every person, detail and camera shot is of complete significance.

The intricate setup, likewise, propels us into the lives of some of the richest characters of any recent movie, among them: Walt Price (William H. Macy), the director of "The Old Mill" who barks orders on impulse; Bob Barrenger (Alec Baldwin), the main star whose risqué attraction to under-aged teen girls may catch up with him; Marty Rossen (David Paymer), a producer who oversees his production like a shark in charge of a scuba lesson; Joseph Turner White (Philip Seymour Hoffman), the writer whose screenplay about second chances reflects his own life; and Claire Wellesley (Sarah Jessica Parker), an actress who is willing to go against her contract because of the fear of doing a topless scene (although several plot gags indicate that her chest has been seen unclothed enough already). Both Baldwin and Parker as the stars of "The Old Mill" are charming screen presences in almost every detail, while Macy, Paymer and Hoffman serve as the loaded cannons for the movie's sharp comedic tone.

The writer and director here is David Mamet, a Pulitzer prize winner whose last three big films—"The Spanish Prisoner," "Wag The Dog" and "The Winslow Boy"—have won universal acclaim for their cleverly devised scripts (although the massive praise for the two latter pictures may have been overly emphasized, since the movies themselves were not as good as the masses perceived). Mamet himself is a decent storyteller, but his greatest forte lies in the spoken word. Like Shakespeare, he supplies his characters with witty, sophisticated and sometimes cynical dialogue that trickles off the tongues of the actors and spurs the audience into several moments of solid laughter. It can be argued that "State And Main" has some of his best dialogue yet: it's clever, enticing, hilarious, and at some points, a little reflective of recent issues in the nation's news. There is one scene, for instance, between the writer Joseph and a woman from town named Ann (Rebecca Pidgeon), in which he offers a ridiculous explanation for why the actress Claire is standing in his room totally nude. He asks her with doubt, "Do you believe it?" "Yes," she replies. His response: "but that's absurd." Her reply: "so is our electoral process, but we still vote!"

Now the question remains to be answered: will Mamet's latest achievement be remembered by the up-and-coming Academy Award race? It remains to be seen. But considering the generally mediocre selection of efforts from last year, the light at the end of the tunnel for "State And Main" remains bright. The movie is flawless. And for those in search of a strong comedy at theaters rather than a mild outing like "What Women Want" or "Miss Congeniality," it cannot be beat.