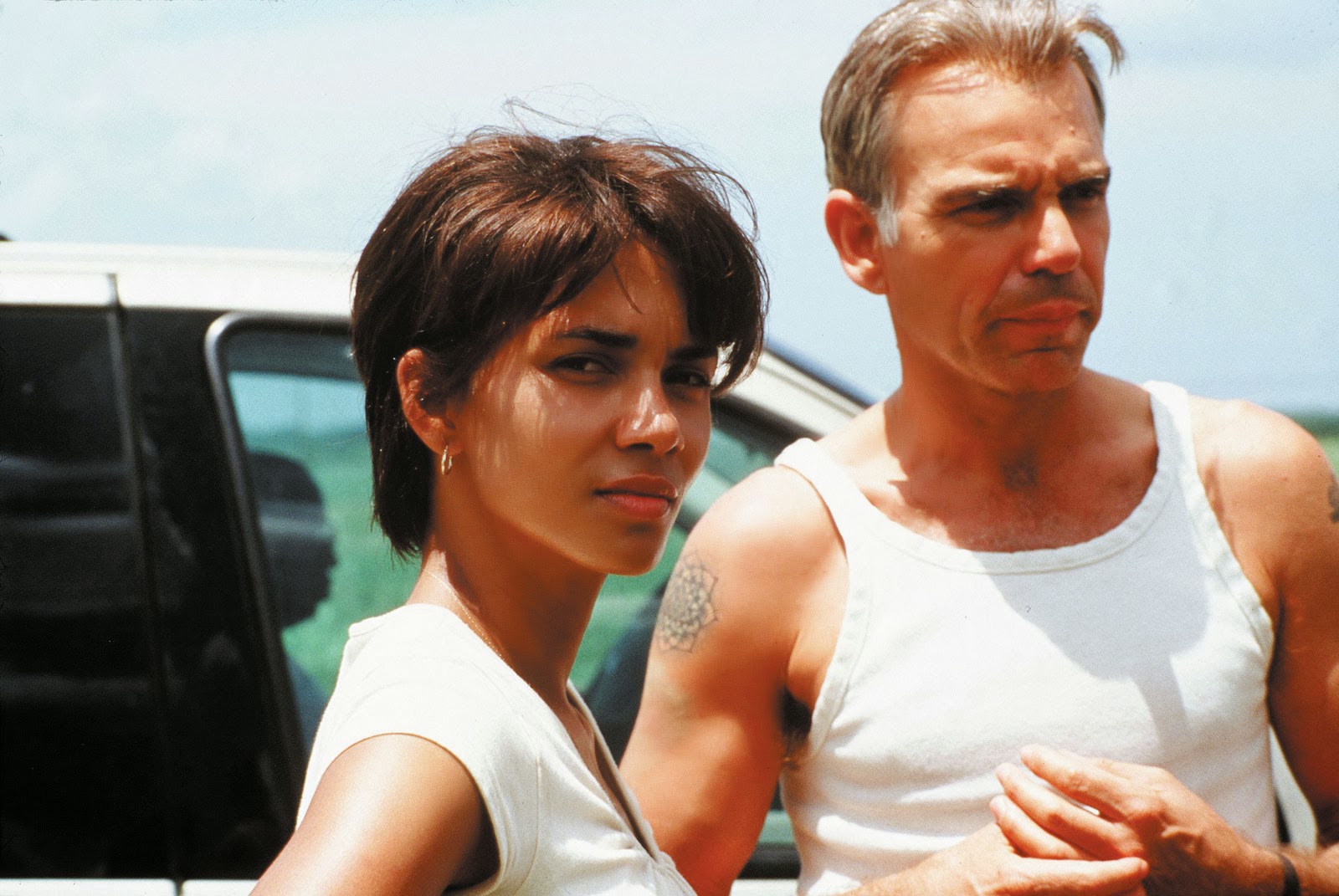 Don't think that the above description a summary of the movie's plot, however. "Monster's Ball" isn't about prison, or inmates, or guards, or even their relationships with one another. It's about survival, coping with our losses and moving on from personal tragedies no matter how intense they may be. The prison situation that opens the film is merely a fundamental, serving as the booster step for the events to follow. In the story, Hank is a quiet, single, plain middle-aged man with a job as the head corrections officer at a local state penitentiary. At home he cares for his old and ailing bigot father Buck (Peter Boyle), and has a son named Sonny who works with him at the prison. All three men live under one roof, and yet mentally they couldn't be farther apart from one another. Buck is detached and blind to everything in regards to his own son, while Hank looks at his own with disgust and regret. At one crucial point of the film, Sonny asks his father with worry, "do you really hate me?" Of course you know what the reply is.

Meanwhile, a parallel story sets itself up. In this one, we have Leticia (Halle Berry) and her son Tyrell, the immediate family of death row inmate Lawrence Musgrove (Sean "P. Diddy" Combs). This household unit is no different than that of the Grotowskis; Leticia, being the only support in the world for her drastically overweight son, works long days and nights at a local diner, verbally abuses her son when she catches him sneaking chocolate, and has essentially given up caring about her own prison-bound husband. "I've been coming here for 11 years," she tells him. "I'm tired."

Both stories are linked by a single thread, and as they gradually deteriorate for the main characters—Hank and Leticia—their paths directly cross one another, leading both of them into a friendship built around their own troubles and losses. What results of it? The indigence to help one another out and, eventually, to rediscover their own lost identities.

As a narrative, the movie is an incredibly depressing one, saturated with so much individual deprivation and loss that there is a point when we don't even feel like watching anymore. But as a character study, the movie works remarkably well, in part because the script builds these personalities to a realistic degree, and also because the film draws spectacular performances from all its major stars. Thornton makes his role as Hank the most honest, challenging and deep of his three major castings in 2001, outshining even the subtle intricacies of his persona in "The Man Who Wasn't There" and the bizarrely amusing attitude of his "Bandits" character. Halle Berry, meanwhile, outshines every one of her previous acting endeavors, providing us with a performance so emotionally groundbreaking and thought-provoking that it would be an utter calamity if she were not nominated for an Academy Award.

What is to be said for the movie as a whole, though? Nothing, other than that it's very difficult on your emotions. Director Marc Forster takes a very subdued but saddening approach to this material, and though his screenplay can't be credited with breaking any new ground or utilizing thorough storytelling, it should be praised for its immense and powerful look at characters who manifest their internal suffering. "Monster's Ball" provides the humanity missing from so many films this year, and though it fails to be a marvelous achievement, it does manage to be one of the year's most effective movies.