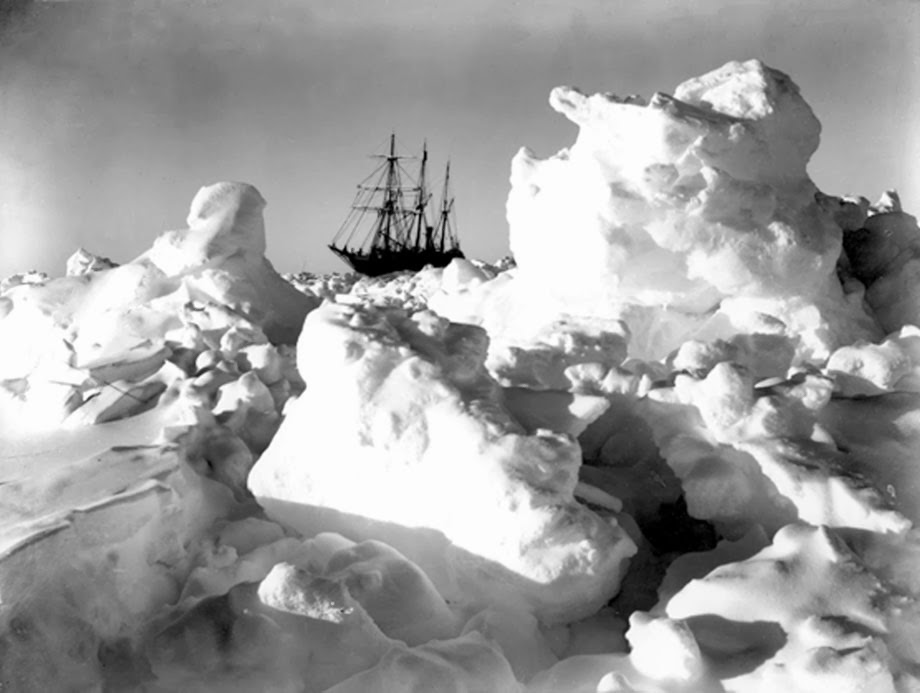 The title of the film refers to the ship Shackleton used during this treacherous journey. The Endurance, as we are told, was named after the explorer's own family motto, which proudly stated, "By endurance, we conquer." As the movie opens, personal accounts provided by relatives of those who were part of the ill-fated voyage underline the irony of the situation; most, if not all, of the men on board refused to discuss what had happened in the arctic with their families for years following the events. And though the story itself is about the stamina and persistence of men fighting a losing battle, it's also about fear, anguish, loss, regret and ultimately, the failure of a dream. Had Shackleton's story been any more dramatic or recognized, directors from every corner of Hollywood would undoubtedly have line up to tell the story.

The Endurance began its journey towards the close of 1914, just as the Antarctic was edging closer to its spring season, the calmest of the year. As Shackleton and 27 others anchored their vessel in the harbor of the last civilized outpost closest to Antarctica, the isle of South Georgia, they waited weeks on end for generally icy conditions to clear up before setting off on their long journey. Soon after the ship was on the high seas, but it only took 3 days before it ran into its first problem—a massive shelf of dense ice sheets that seemingly stretched beyond the horizon. As they navigated their way slowly but surely through it, the ice became even more dense and more troublesome, until one morning the crew woke up to find that, not surprisingly, their ship had ceased movement and was completely frozen in place.

Given the nature of their journey, one wouldn't find this much surprising. However, despite countless efforts to renew the expedition (which involved, among other things, sawing through the ice in hopes that the ship would thaw out of it), the conditions remained that way for several months, right up until the moment when the ice buckled and the Endurance collapsed under its weight, forcing the crew to retrace their journey to the north, both on foot and in lifeboats, as the ice shelf suddenly began to dissipate.

As the story progresses, Shackleton's expedition becomes a dramatic and suspenseful effort for survival, and we learn through photographic testament almost every necessary element crucial to the journey, such as the plan of travel that accidentally takes them to the frigid, unrewarding Elephant Island, and eventually forces the captain and four other crew members to sail through an 800-mile stretch of ocean in order to get to help on South Georgia. By the time the journey was over with, every crew member survived the nightmare, and though the ultimate results of the expedition seemed to be bruised egos and tarnished reputations, survival and perseverance were the key factors in mind for these men, factors that will ultimately be the most inspirational to the audience given the current ambiguity of the US's safety from terrorism.

The basis of any good documentary is providing the viewer with information that is not only concise, but relatively fresh to the ears as well. "The Endurance" is all this and yet so much more in the process. Few historical occurrences come as dramatic, inspiring, thought-provoking and remarkable as the ones depicted here. Even those who knew of the journey and its turmoil will be won over by the engrossing amount of detail provided; camera footage, for example, shot during the harsh situations on the seas is all here, clear and detailed yet significantly eerie. What's even more remarkable about the picture is its ability to magnify the humanity of its players; half of the details, in fact, are about the crew members themselves, who spent the months of isolation amusing themselves by having soccer matches on the ice and mini-concerts below the deck. "The Endurance" doesn't simply care about the facts, it has genuine regard for the people who were involved. That alone makes the movie a more engrossing experience than we would have believed at first glance.

Cast
Liam Neeson: Narrator
*Remaining cast features people who are relatives, friends and/or acquaintances of those associated with the ill-fated journey of the Endurance, who offer accounts of their version of the events