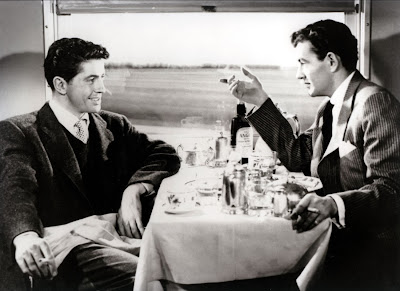 Guy, on the other hand, fancies himself a distinguished gentleman with a wise and observant head on his shoulders. He thrives on success and appeal, triumphing in his daily activities in a way that heightens not just the thrill, but the confidence in his game. Unfortunately, his ego undermines his focus, blind-sighting him from obvious truths while allowing him to carry on in countless pipe dreams. When his morale is called into question by his peers at a crucial stage of events, there is a small morsel of energy in us that actually hopes he collapses into the trap. No, we don't doubt his innocence; we simply find his blind spots too frustrating to go unpunished.

These are the two character arcs that cross paths towards the beginning of Alfred Hitchcock's "Strangers on a Train," which are carefully intersected by luck and coincidence, and anchored by the director's unremitting fascination with turning simple ideas into intricate webs of deception and betrayal. Think back to the structures of "The Birds" or "Vertigo," where realism is a simple foundation established to build a labyrinth of twisted, but eerily authentic, life situations. The truly great Hitchcock works blend the supernatural with the organic until there is no distinguishing the two; this movie makes one of the strongest arguments in defense of that perception.

Like most Hitchcock work, the movie is rich in psychological complexities, using probing facial shots as the entry points, emotions and drilling tools, and ordinary objects as the microscopes toward uncovering hidden fidelities. As the movie opens, we're teased only with two pairs of shoes as they carry their owners onto a major passenger train; one pair suggests a sense professionalism and class, the other represents some flamboyant and rebellious ways amongst the sheep of society. Once both passengers are in close proximity, the camera begins to carry us into their world. We meet Guy, a famous tennis player high on politics, who is the object of admiration for so many sports fans that he is singled out everywhere he goes. Then we are introduced to Bruno, the latest in what we suspect is a long line of adoring fans, who claims to know more about the star's life than the star himself. Guy is amused and flattered, but concern begins to edge itself into the chance meeting when his newly-acquainted fan is able to stress delicate and personal details about him almost out of thin air. His excuse? "I read a lot about you in the papers." For a short period of time, we even believe that announcement.

The rising conflict of this narrative is rather simple, but one that escalates into territory that our protagonist isn't observant enough to catch before it's too late. Guy is a married man in the process of a divorce, you see, and he's ready to move on with his new girlfriend, the daughter of a senator. Bruno emphasizes the notion that his soon-to-be-ex could possibly be an obstacle in Guy's rising career, and that fact plants a seed of paranoia in him. The audacious stranger then garnishes those comments with remarks about his own personal problems, in which his life is ruled and decided on by the wealthy but smothering father he has. The solution: each of them could do the other a favor by removing these two people from each other's lives, apparently in the good spirit of new friendship. Bruno's suggestion feels lighthearted and groundless, of course, and Guy casually shrugs it off. But the audience is soon recollecting on revelations when the tennis star's destructive former bride tries to blackmail him, a factor that the mysterious Bruno himself happened to forecast. Needless to say, the eccentric character isn't about to forget the proposition he made to Guy, either.

A big key to the success of "Strangers on a Train" lies with the reliable performances of both its lead stars. Farley Granger's work as Guy Haines is the kind of quiet but effective lead performance Hitchcock is famous for acquiring in his protagonists, while Robert Walker's as Bruno Antony is intensely charismatic, twisted slightly enough to feed the thrill the audience comes to expect. Walker, whose life was cut short because of an adverse reaction to prescription drugs shortly after this film was released, might have very well prospered greatly in his career as a result of this role, which edges out his solid performances in "One Touch of Venus" and "The Clock" as his finest on camera.

Old black and white films have been wildly praised over time for tweaking with ideas and techniques that inspired countless imitations over the years, and "Strangers on a Train" is no different. Aside from its very evident approach as a crowd-pleasing popcorn flick, the movie is one of the original shells for identity-inspired mystery thrillers, in which natural human behavior is the driving force behind the true macabre rather than supernatural elements. Even classic endeavors like "Fargo" and "A Simple Plan" seem directly fueled by this concept, and chunks of the premise itself even feel repeated in the Danny DeVito comedy "Throw Momma From The Train." None, of course, quite match the challenging and probing thrust of Hitchcock's approach, which isn't just tense and entertaining, but subtle enough to keep the audience's interest piqued without resorting to overkill. The movie is certainly not the greatest achievement under Hitchcock's belt, but then again, how many of us have ever agreed on what this director's best was, anyway?

Produced and directed by Alfred Hitchcock; Screenwritten by Raymond Chandler and Czenzi Ormonde; based on the novel by Patricia Highsmith

Thriller (US); Not Rated; contains some scenes of violence; Running Time - 101 Minutes