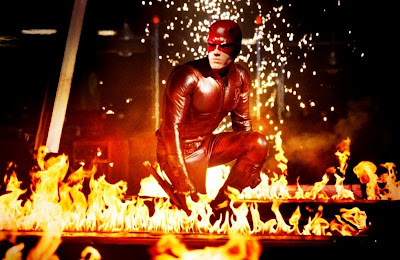 If the audience indeed knows more about the super-hero essence than most filmmakers do, then it will be interesting to see if anyone can explain the mysterious physical chutzpah behind Daredevil, a crime fighter who leaps great distances between buildings, drops hundreds of feet from the air without the use of specific assets or interference to break his falls, and never seems to injure himself as a result. We can get away with most masked protagonists performing these types of stunts because the evidence is always there to enforce it; Superman's superhuman abilities allow him to fly, for instance, while Batman and Spider-Man suspend gravitational limits because they have nifty gadgets that allow them to. And the mutants of "X-Men" can fly too because, well, they're mutants. With this particular comic book hero, however, no specific explanation or hint of reasoning is applied to the concept, other than the assumption being incredibly acrobatic is achieved simply by someone going blind after an accident with spilled chemicals.

The movie is based on the Marvel Comic of the same name, a relatively low-key effort in print that is being pushed into theaters with the same obscure treatment as its source material. Even I, an avid comic book reader of the past, can admit to having never read a single page about Matt Murdock or his adventures as a blind street vigilante. But as is the case even with the most unfamiliar comic heroes who have found their way onto the screen, being an expert on past history is an irrelevant task. This guy may not be as interesting as a caped crusader or as engaging as the mutants from the school of Charles Xavier, but Murdock, a.k.a, the Daredevil, does more than meet the requirements in his dark, moody but generally exciting screen debut.

The movie opens with an obligatory carbon setup: in the heart of the town of Hell's Kitchen, a young Matt Murdock is rendered blind when his eyes accidentally come into contact with dangerous chemicals. In the process, his other senses experience heightened sensitivity, enough so that even when he is stranded in unfamiliar environments, he can pick up enough clues through sound, smell and touch to actually visualize his environment (the movie even shows us how he does it). Blindness has also made him more quick-witted with his peers, too, and when a slew of bullies corner him in an alley, knowing full well that he can't see them, the kid is able to swiftly turn the tables and come out the victor against their clenched fists. Alas, the boy's sense of coping is further damaged when he discovers his father, an aging boxer, murdered in a back alley by a group of unknown thugs. Thus, Matt devotes his oncoming life not only to avenging the death of his parent, but to protecting the innocent people who could potentially suffer the same kind of tragedies that he did. The name "Daredevil" becomes his iconic label in the process.

Ben Affleck plays the older Murdock, a muscular, smart but charming guy who is a lawyer by day and a merciless vigilante by night. Growing older has done nothing to calm his always-alert senses, we gather, and when he removes his mask following a busy night in which he disposes of an acquitted rapist, he crawls into a dark vault filled with calm water and drifts off into slumber (hey, if you had his keen senses, would you be able to sleep just anywhere in a busy city?). The next day, at the local coffee shop, he runs into Elektra Natchios (Jennifer Garner of TV's "Alias"), a fetching female who attracts the curious blind guy merely by her powerful scent. She responds nicely to his advances, but when he asks for her name, she merely brushes the request off and walks out, forcing him to follow her to a nearby playground where they abruptly engage in a feisty round of hand-to-cane combat until she gives in to his bold advances. Their next meeting is predictably less violent, but the seed of passion is already planted in both their personas, and Affleck and Garner do their best to deliver on that sudden spark.

There are bigger obstacles, though, that prevent things from going very far. Elektra's father, a rich and powerful businessman with veiled links to the town's infamous crime kingpin (Michael Clarke Duncan), is receiving veiled death threats because of his urge to leave behind his unlawful ways. Matt's, meanwhile, is split between a personal identity dilemma ("I'm not the villain!" he insists despite his grizzly methods of justice) and the oncoming ambush of Hell's Kitchen's major crime boss, who has hired Bullseye (Colin Farrell), an Irish assassin, to take out both the Daredevil and Mr. Natchios upon his impending arrival. The movie plays with a lot of buildup to these confrontations, although they're not nearly as spectacular or rewarding as early isolated scenes that feature the three in question as stand-alone players.

What's ultimately impressive about "Daredevil," perhaps more than its skillful delivery as both a character study and a super-hero narrative, is the convincing way in which the action plays out. In the age of digital illusion, the hardest task has become making things look more authentic than they really are, but here is a movie that captures the convincing edge necessary to defend all its visual versatility. None of the sky-bound characters here are completely resistant to gravity, either, unlike last year's "Spider-Man" where heroes and villains maneuvered their way through city streets and skyscrapers as if there were no such thing. The characters challenge the laws but are still susceptible to certain limits of reality, and that gives the movie considerably more depth than you would normally expect. There is nothing more boring, after all, than a film that refuses to give its protagonists any sense of vulnerability.

Do we need the explanation behind Daredevil's cunning physical antics, though? Kind of. As you watch the movie unfold, you can't help but wonder how much more convincing it all would have been had we begun to understand the source of his internal energy. What, furthermore, is the source (or even the purpose) of Elektra's? We're told that she spent years training in the fine arts of battle, but all we have to show for it is one preparation scene and one brief confrontation between she and the masked Daredevil. The Bullseye character is utilized only briefly here, too, but that's okay because this isn't one of those super-hero flicks that gets its punch merely from the flair of an antagonist. No, "Daredevil" isn't a spectacular achievement by any means, but in lots of ways it finds the right notes and never fails to pique the interest of its viewers.

Actiony (US); Rated PG-13 for action/violence and some sensuality; Running Time - 103 Minutes