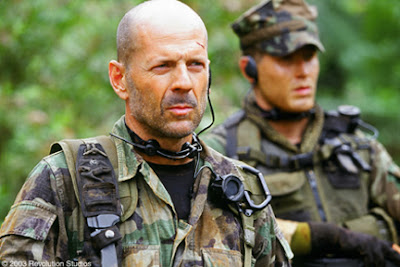 "He was trained to follow orders. He became a hero by defying them."
- Tagline from "Tears of the Sun"

It's a shame that A.K. Waters didn't learn anything about humanity before he descended into the bloodstained jungles of Nigeria, otherwise he might have spared the audience from enduring the painful first half hour of "Tears of the Sun." A the leader of a Special-Ops unit sent into the African nation to rescue selected American citizens from an impending "ethnic cleansing," you'd expect him to immediately emerge as someone who has some sense of priority other than merely getting a mission completed. So is not the immediate case, however, and like a confused child, the movie tiptoes around him for a good 30 minutes before it allows him to make any kind of personal epiphany. And even then, things still don't begin to line up the way they should.

The big problem here is not the fact that Waters lacks balance or even the fact that he finds it at a rather odd interval of the film, however. Bruce Willis, who assumes the role, is stone-faced and emotionally dissonant with the material right up through the inevitable battle scenes, and his costars stare back not like followers seeking leadership, but like loose wires who simply follow foolish examples. These characters are machines, not individuals, and the very idea that a film so concerned with war can accept them as protectors is insulting.

The whole picture is shapeless and badly-written, but it's the first fourth that assumes the bulk of the blame. There is not even a complete first act—just two or three minutes of mission briefing and newsreel footage before it tosses the heroes into the war-ridden atmosphere. Afterwards, we get to see them prowl their way across muddy soils and lush vegetation en route to finding—and rescuing—a beautiful American doctor, but not before moral dilemmas begin to manifest. Will the feisty Dr. Hendricks (Monica Bellucci) leave peacefully with the soldiers, or will the troop be forced to take the sick Nigerians with them before they're inevitably exterminated? Though instructed only to apprehend her and a couple of others, Waters ends up taking all those who are able and willing, only to abandon them in a field before exiting the territory, realizing his unfavorable ways, and abruptly returning to ensure their survival even if it means leaving him and his troops stranded in the jungle. Get all that?

There is a puzzling climactic tone alive in these scenes, as if the movie has nothing more to say or do with its potential human stories. In many ways, it really doesn't; the entire last hour, in fact, is little more than a brainless and stagnant series of battle scenes and long-winded speeches designed to appeal to those who care only about big explosions and self-indulgent monologues. Think for a moment about a film like "Saving Private Ryan" or even "The Thin Red Line," in which characters actually had a voice about the violent climates rather than just a page of dialogue to recite. On those levels and more, "Tears of the Sun" is war fluff for the lobotomized Hollywood crowd, a transparent and thin effort without rhythm, depth, thrust or even basic structure. Worst of all, it's clichéd, too.

The minor parts do have some bright spots. I like the fiery charge of Bellucci in the Dr. Hendricks role, especially when she stands her ground and refuses to be bullied by a pack of testosterone-driven war mongrels, and Tom Skerrit has a couple of good moments as the Special-Ops commander, even though he, like most other minor players, is pretty much in the background throughout the 121-minute running time. Of the significant personas that exist outside of the armed soldiers, only a passionate and beautiful assistant to Hendricks emerges with any kind of established personality. "Help me find my daughter," she mutters to a soldier who listens carefully, and in the end, at least her payoff is there.

The movie's cinematography, in traditional fashion, captures its prey in fast-paced, swift and very violent images, but the battle scenes themselves are too labored to seem genuine. Director Antoine Fuqua, who was behind "Training Day," isn't motivated here by natural storytelling or well-executed vision, but by piling one violent sequence upon another and occasionally slapping in a minute or two of dialogue between them. It doesn't have any natural effect on the audience whatsoever; no, not even when soldiers throw themselves into the line of fire to protect innocent bystanders or fellow comrades. No protector in this movie is doing anything from instinct; they are merely tossing grenades, exchanging gunfire, and throwing their bodies over hills, rocks and behind trees because the script obligates them to.

The movie isn't merely bad, but insulting on an intellectual level as well. How in the world could anyone get away with throwing so many things at us in such a sloppy and shallow way? Most filmmakers who descend into this territory have adopted the philosophy that any kind of outright narrative or technical fragmentation can be excused because the movie is about war (after all, isn't the premise itself important enough to be emphasized so often?), but that doesn't make it an acceptable excuse. In fact, thanks to the industry's recent incessant obsession with it, the genre has joined the sad barracks of romance comedy and martial arts film as one of the most overly-stretched setups seen today in a movie, and "Tears of the Sun" verifies that in every way possible. The sun may have tears, but it's certainly not the only thing.