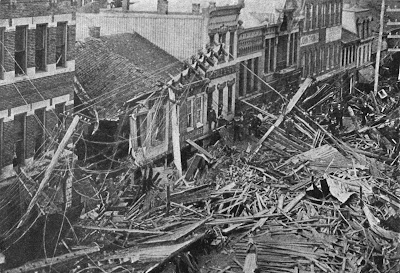 "Johnstown Flood," which comes to the DVD market courtesy of the Inecom Entertainment Company, is the kind of work that you lean forward while watching; the events, at one point unfamiliar, come trampling off the screen almost as if they happened mere moments before. There's also no time to react to specific situations, causes or motives behind the decisions that led to the core tragedy, either. This is a 64-minute documentary clogged with a constant rush of facts, and by default it instantly earns points for taking the effort to explore an event so apparently vague to public knowledge.

The year is 1889, a time when the industrial age was booming and technology meant nothing more than phonographs and light bulbs. We're taken to Johnstown, Pennsylvania, a city hugging the edge of a river that is steeped in this sort of industry (so much so, the movie tells us, that people from across the country came to live and work there). The populous town seemed like the kind you would see advertised on the front of vacation brochures—rich and posporous without a hint of flaw—but little did its residents know of the impending danger that lay just uphill from their peaceful existence.

On May 31, during a fierce rainstorm, the dam in the hills above, holding back a massive lake, burst and sent a monstrous wave of water into the valley below, trampling four other towns before it blasted right into the streets of Johnstown. Waves destroyed every building in their path. Thousands of people drowned. Hundreds more vanished. Fires broke out. And to top it all off, the rush of waves didn't have much opportunity to pass beyond, either—-just a little farther down river, debris piled under a bridge in such a way that it completely broke off the flow, forcing the waters to retreat back into low-lying valley that Johnstown sat in. It was catastrophic, it was a nightmare. And yet no one ever hears about it when the discussion of major national disasters comes up. Why? Perhaps the fact that it was a man-made tragedy has something to do with it; according to the documentary, corners were deliberately cut by those who maintained the structure in order to minimize its appearance as a water barrier. The fact that necessary drainage pipes were removed just a few years before should have been all the evidence one needed in figuring out that some kind of disaster was inevitable.

The production notes, which were tagged with the DVD upon its delivery, exemplify the documentary's purpose clearly—director Mark Bussler and his superiors at Inecom felt that any and all stories told about the Johnstown Flood, at least up until this point, were "sanitized or lacked the emotional impact of what happened on that horrific day." Bussler's remedy? To tell the story through the perspectives of those who survived, of course. Via undoubtedly extensive research, old letters and accounts from the people who were in Johnstown on that fateful day service as this documentary's primary source of information. Sometimes, we can almost sense the urgency in the way certain passages are written; they describe the swiftness of the water, the intensity of the fires and the significance of the body count like the witnesses saw the end of the world but lived to tell about it. No one living, of course, truly knows what it felt like to see all that devastation play out, but the delivery of the letters is manageable enough to guess. A closing shot in which we see the tombstones of all those who lost their lives that day only anchors that sentiment.

Contrary to the spirit of its material, however, "Johnstown Flood" is sometimes more concerned with dramatization than basic fact. Part of that, I safely admit, is due to the fact that the disaster's timeline occurred long before moving cameras could capture the necessary footage; on the flip side, alas, this documentary emphasizes the art of reenactments with such an incessant thrust that it seldom feels genuine. The dramatizations have almost no luster; they are merely there to give the film a sense of cinematic importance, even though all we need in the end is something brief and to the point. That doesn't mean the material itself is any the less interesting as a result, but with the general focus being on dry recreation scenes, the effect comes off as rather stagnant.

The end result here is a rather mixed one, lifted by unorthodox (but effective) techniques of fact delivery but bogged down by the repetitious (and sometimes annoying) sense of pomposity. Bussler no doubt understands the purpose of telling this story, especially in documentary form, but it's the facts themselves that should be driving the storytelling, not the other way around.