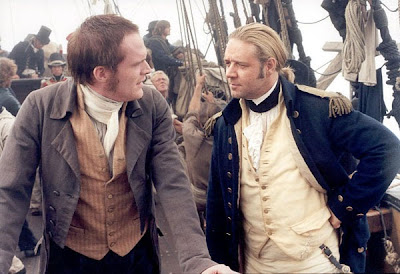 Of course, simply calling this picture irrelevant doesn't begin to describe how seriously flawed it really is. That's because "Master & Commander" is also a surprisingly obnoxious endeavor, an action film so loud, long and disorderly that the end result is a gargantuan failure. And that's a major shock, not just because the film itself has been lauded by countless colleagues as one of the best and most hopeful of the recent awards contenders, but also because it credits Peter Weir's as its director and co-writer. Movie buffs would be more than willing to confess that this is one of our most gifted and interesting filmmakers of the recent past, whose list of credits, highlighted by "Picnic at Hanging Rock" and the more recent "The Truman Show," practically reads like a flawless resume. There's always room for missteps in any career, naturally (who can forget that Weir also did "Dead Poets Society?"), but this latest project illustrates one of the most significant falls from greatness that can easily be recalled in modern cinema. His movie isn't just overlong and boring, it's also ugly, pretentious and sometimes incoherent.

The story (if you can call it one) reportedly deals with the events in the tenth volume of O'Brian's stories. In it, Captain Jack Aubrey (played here by Russell Crowe) and his vast assortment of crew members and friends are navigating the foggy eastern seas in the early 1800s when a French ship slips into the area and begins an assault on the vessel via cannon fire. The surprise attack forces Aubrey's ship out of the area and into even murkier waters, a factor that only fuels the enemy's desire to follow (and possibly capture the ship itself). Soon, both boats are navigating their way around continents and in between island chains in a consistent cat-and-mouse chase that will be the primary driving force of the plot. The conflict itself, however, is not about the enemy coming close to conquering the opposition or the British being victorious. Instead, it is about wide-scale feuds being reenacted on a much smaller scale (in this case, the constant unrest between both nations while Napoleon was still in power).

The basic premise implores ideas that are stationary traits for any film revolved around war on water, but the movie makes its real errors in details. There isn't an exact central plot, just a few minor ones strung together to service as one. For a brief while, the material dodges the core conflicts between protagonist and antagonist via a high-stakes game of predator and prey, done somewhat traditionally in a "Duel"-like approach that prevents viewers from actually seeing or exploring the villains beyond just a shroud in the distance. Afterwards, the movie becomes a personality struggle between Aubrey and his closest comrades aboard the British vessel, most of whom argue that their captain's tactics against the French lack necessary forethought (Aubrey, we gather, is the kind of explorer who does everything based on sheer intuition). Then it takes an extensive detour in order to allow the naturalist doctor Stephen Maturin (Paul Bettany) to dabble in research over the life wonders of the Galapagos Islands, shortly before the French return to the scene and institute a long and bloody battle between both ships that will end in tragedy no matter who wins or loses. Quick—can you spot the relevance of all these ideas?

I don't know how anyone with half a brain approved the script in this kind of condition. The movie clearly establishes that it wants to be an ocean-based dramatization of the long-standing feud between two powerful European nations; what we get instead is a two-hour ride down a gravel road that feels more like six or seven high school history lessons wrapped up into one lecture. The "National Geographic" route implored by the Galapagos segments is especially frustrating; the scenes stick out in an awkward, unsatisfying manner, seemingly there just to allow certain supporting players the opportunity to recite a few extra lines of dialogue or move around in a less chaotic manner as they are during battle scenes. Those that don't get to say anything significant (and believe me, there are several) are basically just slouches assigned to waste space, fire guns and then get killed when the script calls for it. Not one person in this vehicle—no, not even Mr. Aubrey himself, who comes off less like an experienced captain and more like the latest vanity project for actor Russell Crowe—is very interesting, either, and the fact that the movie depends on them to drive the narrative is chaos in itself. The battle scenes, I will admit, are well staged (I really liked the first one in particular, as it happens without warning and demonstrates with clear focus how surprise ambushes can undermine the inevitable violent response). With only two significant ship fights in the entire movie, however, their visual and emotional thrust is numbed because nothing else that happens here is on the same level.

To say that I disliked this movie is an understatement. I loathed it. Never for more than five straight minutes did Aubrey's story absorb or fascinate me; he and the varying members of his crew are mere items in a collection of fragmented and disorganized sequences that involve ships traveling, people talking and guns occasionally being fired. O'Brian may or may not have told some very good stories on paper, but this screen adaptation suggests that its writers only studied cliff notes before throwing together a screenplay. If this is a true example of where Peter Weir's motivations lie in adapting those stories, then maybe he isn't the right director to do a sequel. Someone should give these stories to someone with the instinct to tell them correctly next time.