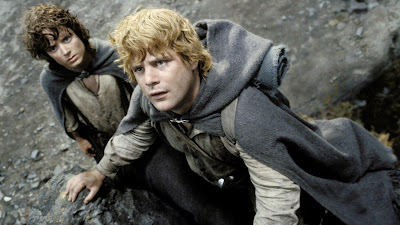 As the end of 2003 approaches, some of us are reliving those emotions with the final installment of Peter Jackson's film adaptations of Tolkien's story. For the past two years, our hearts, minds and senses have been nourished with these awe-inspiring epics, films that both command the powerful essence of their source material as well as revitalize the very industry that they are born from. To see any of the movies is to see history being both relived and rewritten; they possess that classic Tolkien spirit and yet still manage to be more inspired and fresh than most modern films of a similar nature. So it is no small wonder that with "The Return of the King," the third leg of this now-legendary movie trilogy, the audience is both anxious and saddened at the prospect of sitting through the last frames that make up the story. Like the countless Tolkien followers before them, moviegoers are immersed in the subject matter so much now that seeing it come to a close is an emotion none of them are prepared to experience.

Ah, but for the 200 minutes that "The Return of the King" owns us, Jackson and his crew of artists and visionaries don't disappoint those who expect the best possible sendoff. This is without a doubt the most potent film of the series, as brilliantly imagined and executed as its predecessors but even more balanced between aspects of light and dark than either "The Fellowship of the Ring" or "The Two Towers" were. As the movie opens, however, we're given rather stark flashback sequences, from the days of old when the almighty One Ring had initially been recovered from the murky depths it was originally lost in. Contrary to initial belief, the ever-familiar Gollum (or Smeagol, depending on your perspective) was not the first person who first recovered it; rather, it was a fishing partner, who like his friend had such instantaneous love for the artifact that possessing it was essential no matter who got in the way. Unfortunately for him, Smeagol's love for the ring was much greater, and it resulted in his own murder. What follows that dark moment on celluloid is a series of equally-horrendous visual echoes, in which Smeagol's appearance grows less and less human as the ring continues to poison his mind (for the benefit of audience reaction, the director even opts to present Smeagol in human form using Andy Serkis, the same actor who stands in for the digital representation that began in "The Two Towers").

With that tone established, Jackson makes a quick descent into the third and final conflict of this story, fueling it from past events but driving it through the enigmatic urgency of an unknown outcome (at least for those initially unfamiliar with the source material, of course). When we last left Frodo Baggins (Elijah Wood) and Samwise Gamgee (Sean Astin) on their journey to Mordor to destroy the One Ring in the fires of Mount Doom, sneaky Smeagol was enticed by the prospect of regaining his "precious" artifact from hobbit possession; here, the manner of his secretive plot has reached a level as low as that of his first crime committed so many years before on the northern river shores. He isn't just plotting to reclaim his precious, he is conspiring to abandon his masters to a painful doom as well (and for those unfamiliar with the books, this detail is simply too precious to reveal here).

Meanwhile, fellow hobbits Merry (Dominic Monaghan) and Pippin (Billy Boyd) are back amongst their old friends from the Fellowship, awaiting the next sign of the dark lord Sauron's assault on Middle Earth in his attempt to regain the One Ring. Unfortunately, Pippin's curiosity in a leftover artifact from the Entmoot's assault on Isengard in the last film entices the eye of the enemy directly onto him. Thus, with the antagonist assuming that this particular hobbit is the actual current owner of his lost ring, Gandalf the White (Ian McKellen) rushes him into the halls of Minas Tirith, a vast stone city hugging the edge of a mountain, for protection, even though the city itself, the capital of Gondor, is the next target on the dark side's list of conquests. This time, however, the war against men is not going to be so easily tipped in good's favor as it was in Rohan (not that the battle at Helm's Deep in the last film was a cakewalk, of course). In a visual spectacle that far eclipses the army of Uruk-Hai marching against men in "The Two Towers," forces from Mordor pour upon the soils of Minas Tirith like blood from a massive open wound. Their numbers are great and the stakes even greater. Without assistance from outside sources, Gondor will fall and the race of men will no longer be a threat to Sauron or his army. In turn, that puts quite some strain on Frodo's efforts to extinguish the source of the dark side's power.

The central conflict is more focused in "King" than it was in either "Fellowship" or "Towers," but what gives this movie such a productive edge is in the way it brings all the subplots and their characters into one specific final bout with evil. No longer are people being scattered into different directions in this war; though their varying motives remain fairly unchanged, the goal is now more precise: it is time to put an end to the impending rule of Mordor's dark lord once and for all. And yet despite all the resources and victories at the disposal of the primary resistance at Minas Tirith, everyone is semi-powerless in the end because the final step depends on two little hobbits rather than hordes of experienced soldiers. Therefore, the movie is not completely dependent on the prospect of brawn persevering over the darkness. All it comes down to is one simple little creature putting one foot in front of the other, and Frodo Baggins' final steps of the journey with Sam and Gollum become some of the most powerful moments ever captured on film.

The movie is also easily the most well-acted of the three. Viggo Mortensen's Aragorn finally reveals his well-hidden interiors as he is forced to choose between the life of a wandering ranger and the life he was predestined to lead, and during a dangerous trek through mountain caverns in search of a cursed army for assistance in the assault on Minas Tirith, he and his companions seem more realistically like a band of friends than they have in the past. Gravy points are also rewarded to Billy Boyd and Ian McKellen, who add depth to the relationships between Pippin and Gandalf without forgetting the fact that neither of them were exactly best buds at the beginning of this chaotic tale. Miranda Otto, furthermore, finally takes hold of the shaky persona of Éowyn and gives the character a genuine sensibility, while John Noble as Lord Denethor, the Steward of Gondor, is vivacious in his effort to emphasize his character's interior madness just before it begins to consume him during the onslaught of war.

But what is a review of a "Rings" film without mentioning the special effects? No review at all, of course. The pixel-pushing wizards at WETA Digital in New Zealand took special care right from the beginning to give a plausible look to the various realms and peoples of Middle Earth, and in "The Return of the King" their eyes have exceeded expectations. The movie truly is the most amazing visual spectacle ever seen on celluloid; in addition to visual treats already established (like the ever-realistic CGI rendering of Gollum), here we have expansive sets like Minas Tirith (filmed using both miniature models and actual sets before having digital details added), convincing backdrops like the fiery skyline overlooking Sauron's Mordor fortress, creatures that leap onto the terrain with a thud great enough to send shock waves through the theater (note those immense war elephants, for starters), and even an army of dead warriors. One shot during the gargantuan battle at Minas Tirith, in fact, literally sent chills down my spine with its eerie sense of realism, and it was a shot I repeated in my head hours after the experience was over.

On a level of pure admiration, "King" has the strongest and most distinctive sense of individualism of this trilogy. But the best of these films remains the first, partly because of personal sentimental factor (at the time of its release, there was simply no movie quite like it), but mostly because it is the most specific and intimate. Such a factor does not distract from the payoff here, however, because this is still a movie completely of its own brilliance and magic. Is the whole greater than the sum of its parts, though? That goes without saying. And as a completed trilogy, "The Lord of the Rings" is without a doubt the most amazing moviegoeing experience of our time. It's run on the big screen may now be coming to an end, but the experiences we've had watching it have only just begun to lodge themselves in our deepest memories of going to the movies. These are memories we will carry for us for years to come.

These are memories that make it such a privilege to be a filmgoer in the first place.