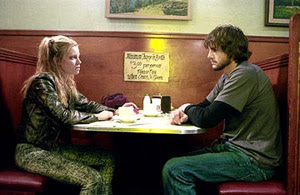 Of course, the Butterfly Effect doesn't even begin to exercise the fact that the theory itself as a whole is as chaotic as its own name. That notion is very much apparent in the new thriller "The Butterfly Effect," a film that depends on these ideas down to even simple lines of dialogue. In the directorial debut from Eric Bress and J. Mackeye Gruber, the writers of last year's "Final Destination 2," a man is plagued by memories from his tumultuous childhood and how they have evolved into tragic scenarios in the present. Seemingly by accident, he discovers that he can travel back in time and rewrite the misdeeds of others in order to reshape certain outcomes. Alas, things he changes have major negative repercussions on how things turn out later on, and soon he is playing hopscotch through time trying to straighten out all the twists and turns, creating a slew of alternate universes in the process. Too bad one of those alternate realities doesn't have someone standing by to try and explain everything that's going on to the audience.

This is an eccentric and puzzling movie, often maddening, sometimes constraining, and yet almost always intriguing. Countless moments pass onto celluloid that leave more questions than they do answers, but in that regard the material is faithful to its subject: to inform one about varying perspectives of chaos theory, the process will inevitably baffle and bewilder many in the process. This trait might have forbid the film itself from having impact if it didn't make any general sense, but amazingly enough there is a thread of awareness in the story that keeps its characters and their situations moving forward. No, this isn't some kind of remarkable achievement by any means; in fact, it would be easy to justify why others would dislike it. But if you're able to leave cynicism at the door and observe things without the intention of analyzing every detail until they make perfect sense, this is quite the observant moviegoeing experience.

The film stars Ashton Kutcher, an actor whose major claim to fame thus far has been "That 70s Show" and the notorious MTV reality program "Punk'd." Here, he is given slight opportunities to test his acting chops, and the result is at least promising. He plays Evan, the main character in question, who spent much of his adolescent life keeping journals of his day-to-day activities. Why? Because the boy suffered from blackouts; there were times when he would seemingly drift off into nothingness and then return without knowing what had happened just prior. This presents a significant problem both for he and the viewers, because the moments that have been erased are usually the most important in the eventual shaping of certain characters. One moment, for instance caused so much psychological trauma to a close friend that it resulted in his mental collapse, while another helped establish a pattern of rebellion that eventually turned another friend into an utter maniac.

In the present day, Evan doesn't think too much about the past and what he remembers from it; after all, he hasn't had any blackouts now for seven straight years. But there still exists an underlying curiosity in him, especially when he hears of a case in which someone was able to reach back into his own mind and retrieve memories that had previously been buried. Curious, he returns to his journals and begins reading them, unaware of the impending prospect that reading aloud select passages literally transfers him back to those exact moments when the missing memories apparently took place. Needless to say, uncovering lost memories isn't merely enough for someone who has had such a rough life, so Evan decides to change the way things were in hopes that it will lead to a better turnout in the future. The result of his playing with the past? If you have been reading this long, you should already know the answer.

The prospect of going back and changing events of the past may be something that is universally shared with anyone who carries the weight of regret, but even those of us with common foresight can clearly see that messing around with that stuff could be too risky a task, especially if it results in changes in the present that we aren't prepared to deal with. So what exactly provokes Evan to bother? As is usually the case with movies about hopeless guys like this, it all comes down to love. For as long as he could remember, Evan was infatuated with Kayleigh (Amy Smart), the prettiest girl in the neighborhood, who was alienated by her abusive father and brother and whose shy attitude kept him infatuated until the day he moved far away. In the film's first reality, life events eventually triggered her own suicide, a factor that alone motivates Evan to the fullest extent. In his mind, it is worth the risk of reshaping things if he can eventually be with the person he has loved his whole life. He never gives anything else the slightest thought.

The movie's script, also penned by the two directors, is chock-full of ideas and goals, but some of its decisions, particularly early on in the film, almost bring the movie to a screeching halt. The problem is in the specifics, namely how certain characters wind up in such vastly different scenarios when even slight modifications are made to the past. Consider the moment when Evan travels back to the moment when he and Kayleigh are photographed in a basement by her pedophile father; by simply preventing the event from happening utilizing a cleverly-worded declamation, he alters his future so drastically that the result is dimwitted and comical when it shouldn't be. Essentially, however, this is the kind of movie that works not by paying close attention to details, but by simply living for the moment and letting the material assault you in the way it sees fit. In that regard, "The Butterfly Effect" has energy that can be admired from an array of perspectives. It is thought-provoking and stimulating. That, I guess, is more than you can say for almost any other January movie release in the recent years.