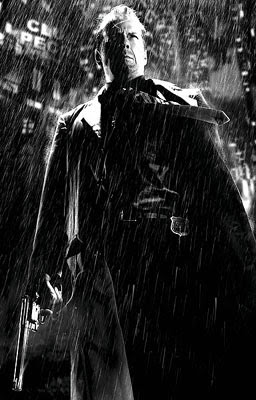 The movie's promotional tagline is as perfect summarization as one requires: "Walk down the right back alley in Sin City and you can find anything." To be sure, a quick glance at any isolated moment included within the picture divulges a horde of cinematic influences, including film noir, comic book pop art, apocalyptic sci-fi, underground crime thriller, and in some regards maybe even a little hip eccentricity a la Quentin Tarrantino (perhaps it is no coincidence that he is a "guest director" here, either). As individual slices these styles stress the thorough surge of knowledge and preparation that went into crafting the endeavor, but collectively they become the embodiment for what is probably one of the most original and exciting motion picture experiences I have ever had. Films this brilliant - or more accurately, this intoxicating and inventive - are elusive wonders in cinema: they operate on no set standards but their own, and take a path that is bold enough to not only challenge expectations, but surpass them as well. It is an accomplishment to be heralded, a film alive with artistic production values, concentrated storytelling and layered characterization for over two fully realized hours. It inspires, it provokes… and most importantly, it resonates with you long after it is over. Here is one of the great visionary achievements of our time.

A hefty portion of the audience will no doubt share this sentiment without much stipulation. A labor of blood and sweat that was seemingly destined for the celluloid, it is adapted from a comic book whose imbedded fan base goes beyond just mere faithfulness; a sheer mass of admirers often punctuate traditional fanaticism with in-depth breakdowns of the series' various characters and plots, their enthusiasm so great that they are often compared (perhaps rightfully) to the most dedicated "Star Wars" and "Lord of the Rings" buffs. Their instant gratification will likely be derived from the visual approach rather than the storytelling - its painstaking likeness to specific frames from the actual source material is wondrous and thoughtful, and lends to the notion that you are being transplanted from one medium to the next with the utmost ease. Comic book screen adaptations have become commonplace in mainstream filmmaking in the recent years, of course, but no matter how ambitious or productive many have been, it is always hard for the result to look like anything other than a full-fledged action picture. Here, at last, is an endeavor that matches acceptable cinematic values with the fundamentals of the original medium it was founded in. The hybrid concept is so fully realized that mere entertainment seems more like striking art, and you're dazzled just as much by the movie's picturesque beauty as you are by the high pitch of adrenaline.

Equally rewarding, furthermore, is the unusual but compelling narrative approach. The movie takes place in chapters - multiple stories, each loosely related but occasionally intersected, are defined by a level of isolation that makes the film more or less a hub for numerous segments rather than one linear account of events. The individual acts also provide more opportunities to outline specific characters, a prospect that is welcoming considering the extensive ensemble. Marv (Mickey Rourke), who is the center of one such episode, is one of the more immediately engaging; a former criminal turned recluse, he crosses paths with a beautiful prostitute named Goldie (Jaime King), seemingly falls in love with her, and then wakes up the next morning to find her dead in his arms. But he is not the hooker's murderer. Who was? Ah, but that is one of several interesting mysteries for the buff outcast to uncover in his search for answers. Like the other anti-heroes who sit in the spotlight of "Sin City's" other brief narratives, there is a lot more to an event than meets the eye. Sometimes the mysteries lead to big unexpected reveals, and other times they are halted by dead ends or mislead instincts.

Other characters experience very similar turmoil. John Hartigan (Bruce Willis), a former cop who insists on bringing down a notorious child kidnapper in the city, is one such character whose task is not without an occasional speed bump. His core dilemma comes when he is sent to jail for several years before he's allowed to finish said task. Yeah, just try having that kind of patience! Another similar crisis (although perhaps not as time-excessive) is the one that befalls Dwight (Clive Owen), a local renegade who is some kind of self-appointed guardian of Basin City's ladies. When a corrupt cop (Benicio Del Toro) is killed and the body falls into his hands, it threatens not only his freedom, but also the safety of several of the women who were involved in the slaying. The predicament: does he surrender himself to save those which he claims he wants to protect, or does he let them take the fall?

The key to victory here lies in the tactics implored by the characters. Their methods are anything but orthodox; whereas most superheroes (or villains) would rather duck behind obstacles when they are being bombarded by attacks, those who live in this metropolis meet all danger head-on, seemingly fearless of whatever fate may have in store for them. They are also not introverted by any means, especially concerning the viewers, whom they loosely regard as innocent wanderers in need of some survival tips. The screenplay's use of first person narration, of course, is a tool that dates back to the great film noir of the 1940s (in which foreboding detectives spoke in sharp metaphors as a way to reveal crucial expository information), but here the filmmakers utilize it to both stress plot details as well as soften the subject matter's potentially-harsh blow. A wise undertaking, to be sure - "Sin City" is populated by corrupt law enforcement, cannibals, child rapists, devious politicians and religious leaders, and prostitutes who take a more hands-on approach in order to ensure their personal safety on the streets. In other words, Basin City is not the kind of place you would want to be visiting while on vacation.

The production values, needless to say, suggest otherwise. Director Robert Rodriguez's glorious black-and-white canvas is a sensation to behold, often interspersed by a sporadic slice of color (spilled blood usually has that distinguishing characteristic), and the way his camera moves in and out of conversations, elaborate shoot-outs and the occasional chase sequences is both thrilling and meticulous. His characters, meanwhile, are decorated just as much by strategic shadows as they are by blackened wardrobes, and mere facial expressions seem to change simply by the way the light hits them. The atmosphere is not without menace or dread, naturally, but it's not the kind of visual thrust that creates claustrophobia, if you catch my drift. The players are usually isolated by an underlying psychosis or conflict, yet there is always a sense that something more sinister is waiting to spring from behind a dark alley further down the road. The city itself is just as much a villain as any of the gun-wielding misfits that dwell on the inside.

Rodriguez is, to be sure, a director who has always had a penchant for ambitious foregrounds (among other things, he is responsible for the "Spy Kids" films), but perhaps part of the payoff this time comes from a different seed: the fact that he shares directing credits with Frank Miller, the very man who created this comic book franchise. Being an experienced (and highly regarded) artist and storyteller in that published medium, Miller has a unique oversight here; his stylish thumbprint is etched painstakingly across the cinematic canvas, and isolated images have such precise detail to them that it's as if they were lifted directly from the pages of the books that inspired them. The professional relationship between both men has been the cause of some controversy in Hollywood recently (did Rodriguez really deserve to be axed from the Director's Guild because his partnership with Frank violated membership bylaws?), but as is usually the case with filmmakers who make great sacrifices for the sake of art, their struggle is ultimately their payoff. "Sin City" is a lot of things - complex, exciting, sarcastic, challenging and thoughtful, and maybe even a little nihilistic - but most importantly it is a picture that reminds us of the limitless potential of the cinema, and how total perfection is something that happens only in the most obscure occasions, especially in the recent years. At long last, here is a film that fully justifies why we still love going to the movie theater.