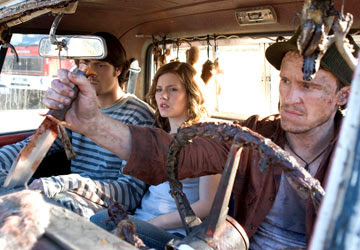 The drive behind this remake, alas, was inevitable from day one. Back in 2000, Dark Castle Entertainment made a crashing entrance into the theater with its promise of flashy and stylish updates of really old 50s and 60s horror films, with a specific slant towards remaking the works of the notorious William Castle (the director whom the studio is named after). The idea, at least to some of us, got off to a rather promising start - the upgraded version of "House on Haunted Hill," while silly, was built around strikingly provocative imagery, and its 2001 follow-up "Thirteen Ghosts" was above all else a triumph of ambitious production design. Those mild successes ultimately paved the path for many more remakes to follow - the kicker being that, once the studio decided to expand its scope beyond the Castle films, they lost a major incentive to exhibit the theatrical enthusiasm of both prior releases. "Ghost Ship," their next endeavor, was just about as amusing as watching a water-logged wreck bob on the surface for two hours straight - but now comes "House of Wax," which is not merely boring but painful, insulting, sick and contemptible, and completely devoid of any type of rational thought or feeling. It makes "Ghost Ship" look as inspired as "Titanic."

The plot (if you can call it one) is an outline that has been replicated in too many horror films to count. Six wild and enthusiastic teens (or 20-year-olds, I forget) are heading into the big city for a great big football game when they decide to pull over off the side of the road one night and camp out. The inevitable conflict: their campsite just so happens to sit right outside one of those small hick downs where everyone around is either toothless or homicidal, and when a mysterious truck driver spots them outside of said town, it sets into motion a shady plot that will eventually lure them into the company of these isolated country citizens. One of the cars is mysteriously sabotaged, the female lead, Carly Jones (Elisha Cuthbert), falls into a pit containing dead carcasses of deer, and at one point she and boyfriend Wade (Jared Padalecki) hitch a ride with a snaggle-toothed redneck who looks like he could be the lost cousin from "Deliverance." Apparently character IQs in horror films haven't developed enough in the recent years for anyone to realize that you should never accept rides from people who look like they should be playing dueling banjos.

The town, at first glance, is seemingly inviting. They meet the local gas station owner, Bo (Brian Van Holt), and find him all too eager to help them with their car troubles; they spy a seemingly genuine funeral ceremony going on in the corner church; and eventually, they wander into the city's big tourist trap, the House of Wax, and marvel at the intricate detail given to each and every crevice on a human figure. What is perhaps a little unsettling for Carly, however, is the realization that it's not just the statues within the House that are made of wax - no, the entire house is made up of it as well! Not only that, but tables, chairs, dishes and great big staircases are also made of the same material, apparently hand crafted after long hard hours of work and patience. Never mind that a house entirely made of wax would never be able to last very long in a southern town with direct exposure to intense sunlight; when Wade and Carly's increased curiosity gets the best of them, it results in the discovery that all of the town's former residents (save for one or two) have been murdered and their bodies used for shells for the House of Wax, which makes the establishment this kind of creepy museum-like graveyard where corpses have all become individual art pieces. Naturally, the proprietors of this house have decided to add all these young new town arrivals to the list of attractions.

I would not dare divulge the details of just how far the bad guys go in creating a perfect wax statue out of a living breathing human being, but suffice it to say, the frontal displays are anything but pleasant. Director Jaume Serra creates here what can only be described as the cinematic equivalent of grinding glass shards in your hands; the displays are all shock and no horror, and they play out in such an amateurish and unsightly manner that no one is ever able to spot a shred of artistic relevance in them. Material this harsh - or, more appropriately, this sadistic and deprived - is not easily dismissed when a filmmaker at least sees it through a compelling eye, but there is no exhibition of anything resembling appeal here. "House of Wax" is a shameful lapse in judgment, and one that never ceases to look and feel as grotesque as it sounds.

If preview audiences are anything to go by, filmgoers can at least depend on not leaving the theater completely dejected; in fact, the enthusiasm of some viewers is sometimes so strong that it results in moments of unforgettable irony, such as when a crowd of onlookers actually stands to applaud a scene when the character played by Paris Hilton is offed by a pole being shoved through her forehead*. Up to that point, of course, Ms. Hilton has more than annoyed audiences with a painful display of stone-faced dialogue reading and character interaction, so perhaps it is no wonder that certain viewers are happy to see her get knocked off. The fatal flaw in all of this is that the movie doesn't even bother to take such necessary action until the talentless socialite has already polluted her way across the celluloid for a full hour. Why bother to wait that long? For some, it seems, a consistent display of bad acting can more than make up for the lack of scares in a horror movie.

*If you are one of the hundreds of individuals who will no doubt be sending a scathing e-mail to yours truly for giving away a crucial plot point concerning the Paris Hilton character, please title your message "House of Wax Spoiler" so I can better ignore it. Thanks!