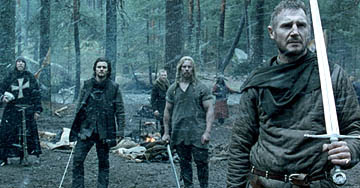 A platform such as this would no doubt pique the interest of most audience members - it encourages potentially rich character observations, lots of relationship building, self-discovery and emotional confrontations, among other things. In a perfect world, Ridley Scott could have directed a great film encompassing all these traits with his eyes closed, but this alas is not a perfect world, and even a master at his craft is capable of stumbling when you least expect him to. The first glimpses into "Kingdom of Heaven" are meaningful and observant - and, indeed, the subtle exchanges between the two leads have a certain attentiveness to them - but it is not long before the movie falls out of sync with its core objective and becomes what we ultimately fear: just another historical action blockbuster with a bunch of warriors crowding together to try and take down a big burly enemy. And even on that level there is something seriously wrong with Scott's approach. The movie is boring, shows little interest in any of its supporting players, and slogs its way though so many vague reference points and inconclusive plot strategies that it becomes increasingly tiresome with time. That this endeavor comes from the director of "Gladiator," a triumphant period piece and one of the best films of 2000, is utterly baffling.

The setting is the 12th century, at a time when personal and political convictions were made on the basis of faith, and cultures fell into the shadow of relentless religious persecution. The story of Jerusalem, the birthplace and home of Jesus Christ himself, is one such place littered in this kind of violence, and the screenplay by William Monahan chooses to set itself at one specific battle-driven interval of that time frame. As Balian of Ibelin ventures out of France and into the walls of the city, the Christian authority is on the eve of declaring war against an uprising of Muslims who wish to seize the land they believe was stolen from them - a bad omen, especially for a kid like Balian, who has been enticed to the city by his father on the grounds that it offers opportunities for redemption and forgiveness. Perhaps it does, perhaps it doesn't. But in any case, personal change, he soon realizes, is not going to come just from sitting off to the sidelines while the people around him are exchanging sword thrusts.

Seemingly against his initial expectations, the quiet but sober-eyed new arrival is thrust right into the affairs of the Christian court of Jerusalem. King Baldwin (Edward Norton) is not keen on the idea of war, but his leprosy guarantees a shortened reign, and the one in line for the throne, Guy de Lusignan (Marton Csokas) would certainly go against the monarch's wishes. That spells good news for Reynald (Brendan Gleeson), an active voice in the court who advocates ambushing the Muslims, but reaction from the knight Tiberias (Jeremy Irons) is not so agreeable; like his king, he believes the best way to settle the control of Jerusalem is by non-violent means. Further complicating matters is Balian's own stance on the issue; following a violent encounter with two Arabs in the desert just before his arrival in Jerusalem, he has developed a sort of sympathy for his apparent enemies, a notion which may or may not eventually sway his allegiance to the Christians.

During all of this strategy and plotting and court intrigue, a backdoor romance between Balian and Princess Sibylla (Eva Green) emerges. He, wide-eyed and desirable, and she, fetching and forbidden, are a given distraction for a premise of this size, and as such are subject to all sorts of romantic interludes and deep meaningful discussions. Thing is, though, their brief on-screen attractions amount to a lot more than what Ridley Scott might have originally intended. Perhaps that is because the relationship shared between both turns out to be one of the only genuine connections made between characters here; elsewhere, the main players spend so much time immersing themselves in religious mumbo jumbo and physical battle that they seldom have a chance to stop and study one another. The inevitable ideologies and fool-hearted statements are there ("What we are doing is God's will!"), but they have very little punch because neither the director nor the writer are very interested in those who say them. Halfway through the film, some of us find it hard to even keep faces with names, and once it is all over you're not entirely sure whether things have happened one way or the other. The movie is all a jumble with its central focus, and one that is barely redeemed by skillful (if rather routine) battle sequences.

There are some constants. Orlando Bloom, at least, seems to have had some acting lessons this past year; he is not only a little more collected in "Kingdom of Heaven" than in last year's "Troy" but also more convincing, and the maturity exhibited in somber facial expressions turns potentially cringe-worthy moments into something passable. Beyond that, Monahan's screenplay does a pretty good job of not taking sides in the inevitable war of religious beliefs; whereas most writers might have given Christianity the role of designated hero (especially during troubled times in the Middle East), this film appears to be less interested in outcome and more interested in the grey area. The movie also looks and sounds great, a Ridley Scott technical trademark that populates even the director's most failed cinematic attempts. The drawback this time is that he simply cannot force any of us to care much about what these characters are doing or why they are doing it. Here it is all lecture and no humanity, and that sad realization comes just when you expect the picture to soar to all sorts of seemingly-unreachable heights. Turns out the only thing unreachable here is general interest.