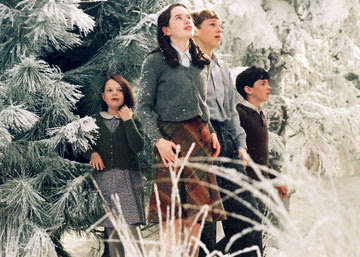 The elusive charm of C.S. Lewis’ Narnia is that it represents a time and space when realism is just a formality; its rich and vivacious narrative canvas simplifies life into very basic fundamentals, and creates a journey that will whisk four ordinary children into quests galore that require little more than basic survival instinct. Who cares if one of them is too inexperienced to know when an evil white witch is manipulating him? Who cares if none of them know how to respond when meeting a couple of talking beavers? And who cares if their limited exposure to life makes it impossible for them to see just how important their future tasks will be? Curiosity may lead to trouble, but in fantasy literature it is also the spring board for the most spirited of quests.

A lot of these notions occupy a good chunk of the fabric that makes up Andrew Adamson’s “The Chronicles of Narnia: The Lion, the Witch and the Wardrobe,” an engaging and visually-stimulating adaptation of the first book of Lewis’ immortal seven-part Narnia series. In it, four young members of the Pevensie family are sent away from war-torn Britain to reside in the peaceful countryside, where they will share quarters with a mysterious old professor in a rickety old mansion decorated with historical artifacts. Here, behind the mysteriously large doors of an old wardrobe in the corner of an empty upstairs bedroom, is the gateway to a realm very unlike that of our own: a place where mystical creatures roam, ordinary animals talk, and magic seems to spring from the soil as easily as trees. That a most curious girl named Lucy is the first to encounter this place makes the discovery all the more significant. Ordinary people would bog down their astonishment with caution and uncertainty; here is a girl who sees so much beauty surrounding her that she doesn’t consciously think about the dangers lurking behind the corners. At times she looks at the world with such vivacious enthusiasm that we feel like we can explore it right along with her, caught up so much in its freshness and purity that the hidden menaces would seem irrelevant, almost nonexistent.

Lucy’s return to her world, alas, does not yield the results she hopes. Her siblings dismiss the findings as little more than childhood daydreaming. Then her antagonistic brother Edmund, a cynic at heart, follows her into the wardrobe and arrives at the same destination. When he does, he crosses the path of the self-proclaimed “Queen of Narnia,” a persuasive and calculating manipulator who preys on his inability to sniff out hidden agendas. Hers is that her throne is threatened by the arrival of girls and boys from the human world, who, as legend has it, would bring an end to her firm grasp on the land and return power to the common beings that inhabit them. When you’re actually an evil witch whose primary motivation is all about power, though, it is natural that you would feel so threatened.

The White Witch is an awkward but brilliantly eccentric character that demands restrained emotion and solid physical presence. She entices Edmund with such a cunning delivery of promises of glory and grandeur that he is sold almost immediately, never once questioning the possibility that the first being he meets on the other side of the wardrobe doors could be capable of so much harm. The fact that his own siblings perceive him and his abrasive actions so negatively only fuel that fire; he occupies the narrative with a major chip on his shoulder, as if he has to prove something to all three of his relatives, and when the Witch tells him that he could be king of Narnia if he brings the three others to her custody, he sees it as the perfect opportunity to upstage and overpower those who doubt him. It never crosses his mind that he might be making the ultimate betrayal.

Be it through eyes of optimism or pessimism, the movie knows exactly what it is like to be a child. Young imaginations love the idea of being caught up in a rip-roaring adventure, ignoring the potential consequences of such tasks because they see glory, seldom sacrifice. Lewis’ narrative, too, does a great job of emphasizing those points through the eyes of its young heroes. Consider, for instance, a scene in the film in which the Pevensie children are confronted by the White Witch’s band of hunting wolves near an icy waterfall, or when they enter a battlefield commanded by a talking lion named Aslan. The realizations are just as powerful for them as they are for the youngsters who are consuming the story. They sympathize with the four kids, laugh and cry right along with them during all of their adventures, and by the end they feel like they have grown to understand more of the world right along with the ones that have been subject to all the action.

I would be lying, of course, if I didn’t admit to being very caught up in this saga. Lewis’ books were a personal detour on several occasions over the years, and each time I read them I was caught up so passionately in the tales that I felt more like a participator rather than just an outside viewer. It takes more than just an understanding of kids, furthermore, to make such a successful transition from the books to the screen. Several fail, alas; just ask the early directors of the “Harry Potter” films, who upstaged the childhood sensibility of the story’s main characters in favor of incessant visual effects. Here, Adamson has touched on the center point of his subject matter so well that the transition is fluid. Aside from being consciously aware of the mentality of his four main personas, he knows how to handle images without having them totally overwhelm the whole foreground. Some of the effects are almost completely unrecognizable, even; centaurs, griffins and polar bears rush off the screen not like stylized cartoon dramatizations, but rather like authentic, living and breathing beasts. WETA Digital, the brains behind the digital masterpiece that is Andy Serkis’ Gollum, continues to thrive on their ability to pass of illusion as the real thing.

Perhaps most pleasing is the fact that the picture also does not directly make the narrative connection to Christian allegory that so many might have assumed. Sure, imagery references are heavy on the themes on some occasions, particularly during battle – a fellow critic was quick to note that all of the animals used on the side of the White Witch were known symbols of pagan study – but unless one consciously looks for it, the entire sentiment almost goes unnoticed. And that’s a surprise, especially considering the fact that Walden Media’s primary promotional blitz was backed by the same religious-driven people who got out the good word for Mel Gibson’s “The Passion of the Christ.” Could it be that those behind the camera went this route because they desired a more universal appeal? Or were they just not intent to touch that subject period? Either way, their decision to dust away the footnotes of this story is wise; the characters and their plot lines place far more emphasis on the fantasy element rather than the religious one, and in the process we don’t feel like we’re sitting in Church on Sunday listening to the preacher’s latest sermon.

In terms of sheer oomph and exercise, “The Chronicles of Narnia: The Lion the Witch and the Wardrobe” is hardly going to set the world on fire in, say, the same manner that the “Lord of the Rings” trilogy did, but what it does do is bring that scope of imagination down to a more accessible level for the kids. The movie is beautiful to look at, fun to observe, and at some intervals nostalgic for those who grew up with the stories. The benchmark for a new movie series has been set, and now it remains to be seen whether Aslan the Lion’s roar can be just as loud the second or third time around as it was on the first occurrence.