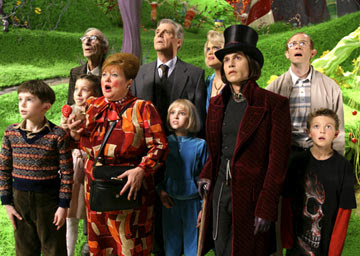 Tim Burton's "Charlie and the Chocolate Factory" plays like a road trip through the mind of a recovering psychiatry patient, zany and unsystematic, and so encased by its own bizarre reality that at times you wonder whether you will need a few prescription drugs to get through it. The visual look provides clues to the mindsets of the director and his special effects artists; here, on a canvas that has essentially been cleansed of all previous concepts of the famous children's novel by Roald Dahl, they unleash an environment that feels less like pure creative enterprise and more like a hallucination induced by illegal substances. That's not to say the movie lacks the enticing quality that make most of Burton's offbeat visual feasts so enjoyable, but to utilize it in a story which has, at its very basic core, been targeted towards children ever since its inception certainly blurs the focus. Is this movie for the kids, or is it for the Burton aficionados?

If the former, then the director either expects his target audience to be very open-minded, or at least doped up on enough Ritalin to find solace in the twisted images that he puts on display. The images themselves aren't exactly scary or fearsome, mind you - in truth, most of them retain the childlike tone necessary of the subject matter - but their presentation is absurd to a fault, almost as if the visual technicians were told to look at their canvas like they were channeling Andy Warhol. In one instance we get a sight that, on paper, sounds intensely attractive: after entering the long-dormant domain of Willy Wonka, children find themselves walking across peninsulas of land covered in fluorescent grass, the rivers and streams between them consisting of warm rich chocolate that is churned by a waterfall in the distance. The scene, however, is punctuated by an unsettling darkness that protrudes the edges of the celluloid, and its menace seems embraced as the faces of the onlookers (particularly Wonka himself) are scrawled with grins of satisfaction. The only thing the scene is missing is the theme music from "The Twilight Zone" and an introduction by Rod Serling.

The movie opens with that ever-familiar premise of the first film adaptation of this story. Under the noses of millions of kids across the globe, who are fans of the famous chocolate produced at the equally-famous Willy Wonka factory, five candy bars containing special golden tickets have been sent out into local candy shops across the world, enticing prospective finders with the opportunity to come into the chocolate factory itself and be possible recipients of a very special prize. When news spreads of this contest, kids from every nook and cranny of society scurry off to the nearest shops and buy as many chocolate bars as they can, hoping to be one of the five lucky kids to find the elusive golden ticket. The process of discovery, one would suspect, could take a considerable amount of time in such a situation, but the movie doesn't consciously recognize that fact because, well, it's hard to keep a kid's interest for longer than two hours. Instead, it resolves the issue of where the golden tickets are found almost entirely in the first half hour, when four announcements from four different areas on Earth announce the findings of four tickets in the possession of four seemingly-snotty kids. What of the fifth ticket, though? Ah, that one is saved for the film's little hero, Charlie Bucket (Freddie Highmore), an earnest and good-natured boy that lives with his poor family in a shady little shack just outside of town, who goes to bed every night with the chocolate factory visible at a distance in his window.

The factory itself, a symbol of grandeur with a foreboding exterior that pelts onlookers with extreme curiosity, is the brain child of Willy Wonka (Johnny Depp) a reclusive (and eccentric) man whose exterior features (wacky attire, pale complexion, big white teeth) create the most ideal visualization you can expect of this particular character. Depp, who is no stranger to unconventional roles, certainly doesn't try to duplicate the famous Gene Wilder performance that stood out in the 1960s film version - here he comes off as less hardened and more festive, so intoxicated by the personification of his character that you get the sense he wants to live it rather than perform it. The portrayal works, although not necessarily for the conventional reasons. Although he is like an anchor of quirkiness amongst all sorts of untamed sights and suggestions, Wonka's underlying disdain for children is played to a point where it seems almost condescending, as if he is speaking down to the audience without them consciously realizing it. The shrewdness of it all is both creepy and comical.

As for the children themselves, only Freddy Highmore as little Charlie Bucket is able to uphold a certain level of independence from the rather familiar narrative. While he is at an obvious advantage - being the core focus of the picture, and the only one of the five golden ticket holders who is likable - the other four are saddled with too many pre-existing demands to give them much of chance at developing their own personalities. That's because the screenplay by John August sees its supporting characters as nothing more than background interference, and Charlie's competitors exist for no other reason than to prop up the understated characteristics of the hero. "Willy Wonka and the Chocolate Factory" operated on similar sentiments but allowed the children to have fun with their mischief; here they seem too stuffy and off-balance. Similar can be said of the adult players, particularly Charlie's parents (Helena Bonham Carter and Noah Taylor), who make obligatory appearances to create an awareness of family but are then shifted to the background when the story moves beyond their household. Then again, when one parent's most recent claim to fame was playing an ape in the Burton remake of "Planet of the Apes" and the other's career was jumpstarted by a portrayal of Adolf Hitler, perhaps it's understandable why you choose not to give them more screen time in a film like this.

I am, perhaps, putting a strong emphasis on things here that do not need it, but to see this strange film with anything other than an off-the-wall approach would not be doing it justice. This is the kind of picture that is built on colorful madness, and as such it deserves to be seen from that perspective, even if just partially. Either way, of course, "Charlie and the Chocolate Factory" will no doubt be one of the more unique experiences of your recent moviegoeing adventures. There certainly has never been a film like it, that's for sure. But considering the amount of energy, patience and spontaneity that Burton's ambitious undertaking requires, it is not likely that you will have the energy to see it on multiple occasions, either… unless, of course, you're a chocolate eater on a major sugar buzz.