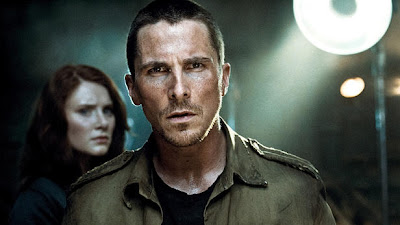 The ominous fashion in which “Terminator Salvation” begins its existence on screen does little to calm the nerves of franchise devotees worried about a film that is missing a quintessential action hero, but it does offer new challenges. Instead of being faced with bleak setups or recaps of prior finales, the movie instead opts to open in a jail cell in 2003, where a death row inmate (played by Sam Worthington) is visited by a mysterious figure known as Dr. Kogan (Helena Bonham Carter). She is there in a last-ditch attempt to get him to sign over the rights of his cadaver for scientific study, specifically for purposes of cancer research (as suggested by her ghostly, balding appearance). A little persuasion works in her favor, and mere hours before one Marcus Wright faces his lethal injection, the company which Dr. Kogan represents becomes the legal owner of what will remain of this prisoner. Flash forward 15 years: judgment day has happened, Earth’s surviving humans are in isolated pockets across the globe waiting to rise against the machines, and Marcus appears seemingly out of thin air, alive and breathing, with no memory of his whereabouts since that fateful day of his execution.

The idea that “Salvation” dares to turn its focus away from obligatory targets for even a brief time emphasizes the forwardness of its writers, who most might have expected to simply tell a straightforward story about the apocalypse and its hero. But the movie does none of those things; rather, it takes both setting and protagonist and hurls them from a platform anchored in traditional action traits into an endeavor that balances it with rich and unsettling mysteries. There is no question that John Connor is intricate enough a character to sustain plot direction for multiple more sequels in this series, but here he is (almost fittingly) upstaged by a competitor who forces us to ask deeper questions than we are used to from a “Terminator” film.

Not that John Connor is any less diminished than he should be. Played here for the first (but probably not last) time by Christian Bale, the movie focuses primarily on a plotline that involves John searching for one Kyle Reese (Anton Yelchin), a survivor of Skynet’s hostile takeover of Earth whom, series purists will remember, is destined to be sent back in time and become John’s own father. In “Salvation,” however, we meet Kyle almost by accident, when he steps in to save an aimlessly wandering Marcus from being killed in a Los Angeles alley by a gun-toting terminator. Overrun by machines from every angle, the teenage rebel speaks often in swift but brief episodes of an impending uprising against Skynet forces, encouraged by the voice of a man – John Connor – whom the scattered masses have come to consider a prophet in the war against the machines. Good for them, bad for Connor; already exhausted by the endless array of run-ins he had in the distant past with terminators sent back in time with intents on either killing or protecting him, here is a man with so much responsibility that his actions seem dictated by not just compassion for humanity, but perhaps also an unwritten obligation to uphold his image. Nonetheless, when an alliance of resistance fighters plans to interrupt transmission signals over Skynet headquarters in order to blow up the facility with living prisoners inside, John expresses immediate disapproval. What is the point, indeed, in beating machines if you are simply thinking like them in order to win a war?

The screenplay by John Brancato and Michael Ferris finds itself at an interesting crossroad in the sense that it requires the story arc to follow specific avenues in order to validate the elements of the first “Terminator” film. In that sense, the movie feels almost prequel-ish in that necessity, particularly with the development of the Kyle Reese character, who seems young and rough enough around the edges to allow breathing room, but is really fully developed at the basic core because, well, we already know his older self so well. This is not to discredit the screenplay in that approach, however; given its choices, the movie makes fitting decisions in filling in gaps and knows exactly when to make necessary departures in order to live on its own creative whims.

Which brings us back to the Marcus Wright character, a man filled with wonder and worry as he wanders a world overrun by machines and impending death for those lucky enough to survive as long as they have. In truth, Marcus is simply a machine without self-awareness, whose death and subsequent rebirth as a terminator has seemingly left him with traces of his original consciousness. This creates an interesting dilemma for both himself and the characters around him. Can he be trusted? Should he be feared? Does his awareness of his own free will and memories allow him to overcome the machine interface? Or is he simply processing an illusion of humanity, programmed in such a distinct way that not even he himself is aware that all his actions and thoughts are pre-installed? These are great, evolved, fully-realized questions briefly touched on in the first films, when the terminators were given flesh-and-blood shells to hide under. Yes, but those terminators were also never living organisms in the first place, whereas Marcus had a mind and soul. The fact that his new structural existence allows him to retain his initial vital human organs certainly adds weight to the arguments.

As a thinker’s movie, “Terminator Salvation” is in the tradition of the most visionary science fiction. But as an action picture, it must be said, the movie is fairly straightforward, plain, and perhaps too generic for its own good. Not content to push any new boundaries from both a visual and technical perspective, we are often encouraged to slog our way through two hours of constant cat-and-mouse chase sequences, elaborate explosions, loud shoot-outs and vulgar displays of uber-macho sensibility. Why is it that men in sci-fi movies often spend most of their verbal discussions either shouting or renouncing military-style orders without actually thinking of all the angles first? Better yet, why do so many action flicks with a post-apocalyptic canvas almost always require their men to appear ratty and fully-clothed while all of its female characters are half-naked and physically fit? The movie does nothing to defy that formula. For those more interested in the psychological aspect, this will not be that big a detractor; but for those more concerned with the overall package, the result is, sad to say, fairly ordinary in the grand scheme of things. And for a movie that is likely to attract an audience simply based on its exterior, that could spell big trouble for its future at the box office.

Still, there is no denying that there is still much to be appreciated here. The story is straightforward without being boring. The characters are fully realized. And even more than that, I admire the mere notion that any writer, experienced or otherwise, could muster up the courage to devise a premise that requires some focus to be taken off of all its intended targets for the purpose of elevating something new and unheard of. There is great risk in moving the crosshairs onto something vague, especially in a series as directly focused as the “Terminator” franchise, but it is a risk that works. By the end of the installment, I even found myself more interested in how Marcus Wright would resolve his own crisis rather than how John Connor would be able to save Kyle Reese’s life and prevent the destruction of the narrative timeline.