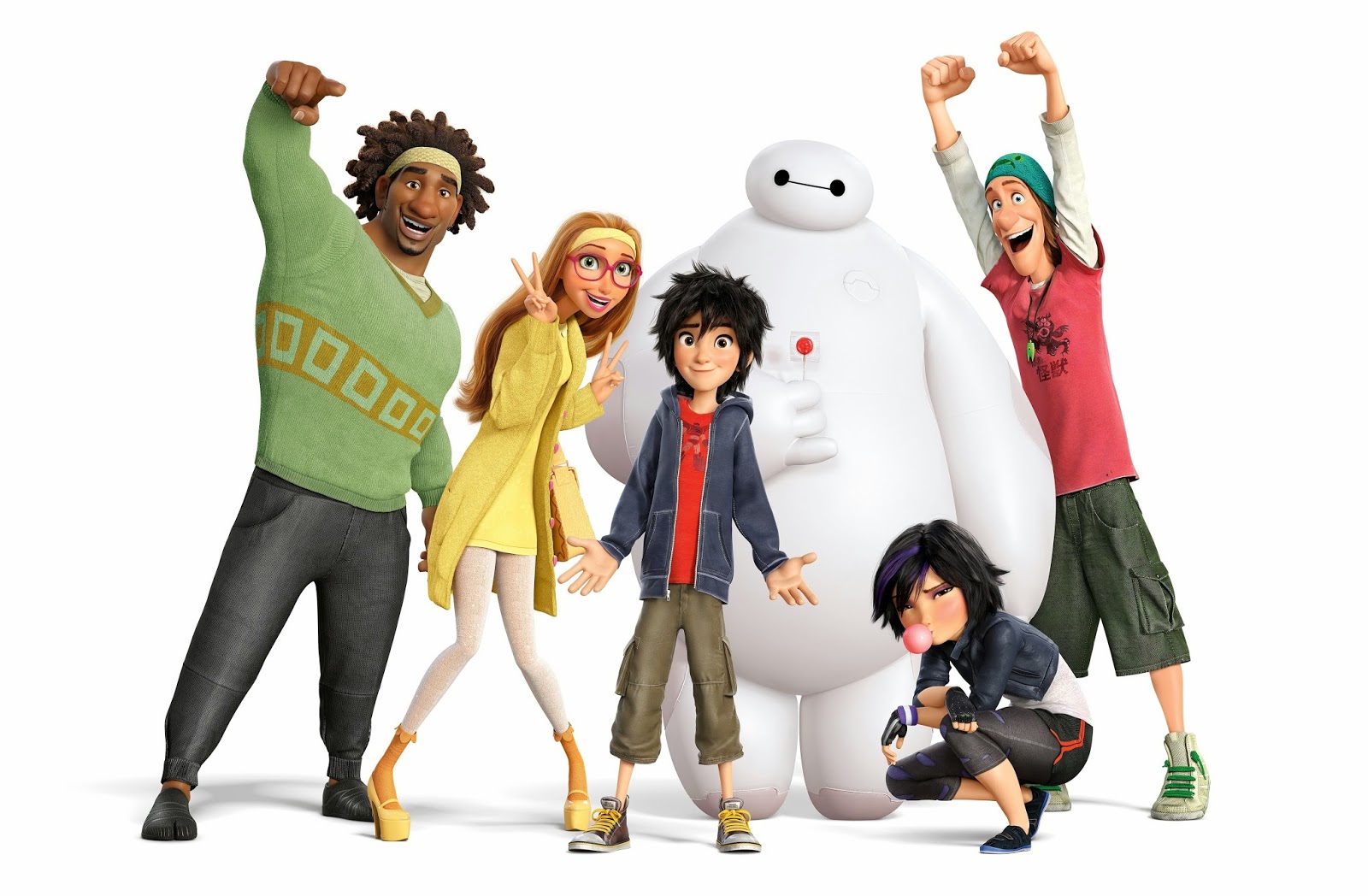 For about two thirds of the film’s running time, that marriage of values produces something quite extraordinary: an endeavor so in awe of the elaborate sight and sound show that one is instantly caught up in the excitement, and stimulated by all the side pockets of conflict scattered across the story. The images, meanwhile, leave us with some of the most inspired sights of any recent animated feature; in addition to a vibrant visualization of what may exist beyond a teleportation gate, here is a movie that also manages to create a stunning cityscape containing elements of both American and Japanese culture (aptly called San Fransokyo), and then allows its six primary figures to move freely through the streets as if masters of maze navigation. It is clear while watching “Big Hero 6” that the technical wizards are more than just well-versed in the art of animation: they also perform as experts in movie science fiction. So why, then, does the screenplay bother doubling back in order to provide them with such a conventional villain? Why must it retread to the notion of revenge being the sole instigator of offense and then bring it all to the forefront in a climax that is both brief and short-sighted? Here is a movie so brilliantly realized and exciting that its final act deserves far more than the traditional outlook of more recent studio cartoons.

Our first descent into San Fransokyo nonetheless yields great promise. The hero of the movie is Hiro, a 14-year-old rebellious braniac who uses his knowledge of robotics in random sprees of illegal bot-fighting in private clubs – a normal pastime for youths in this city, we quickly learn. Such knowledge does little to impress his older brother Tadashi, however; a science student himself at a local university, he is disheartened to see his young promising sibling squandering away his intelligence through illegal means, and attempts to steer him into more lucrative directions by inviting him into the facility to see what is possible with proper education. While there, Hiro meets an assortment of quirky characters that will inevitably double as close friends, and their most distinguishing characteristics are not necessarily names or personalities (although they are creative), but laboratory projects (example: the Wasabi character is an expert in laser beams, and has created a force field that will cut through anything). Hiro is so enamored by what he sees that it instantly stirs him into action: somehow, someway, he must impress the school’s director Professor Callaghan during an upcoming student fair in order to be enrolled into the university, because that is where all his dreams can be realized.

Hiro does indeed create an astounding invention worthy of notice: millions of “microbots” that can be controlled by a singular device which allows the wearer to telepathically alter their structure to do anything desired of the controller. The fallout of his remarkable creation, however, is drastic; after being nearly lured away from the university by a snooty businessman wanting to purchase his product, the school goes up in flames, and both Professor Callaghan and Tadashi die tragically in the fire. As days and days of paralyzing grief turn into weeks, Hiro stumbles upon the realization that his own invention does, in fact, live on… and not only did it survive said fire, it now lies in the possession of a masked man who is seemingly using it as a weapon against all those associated with it. Though the identity of the villain remains secret for a good duration, the looming threat of his presence is clear, and one of the movie’s great action scenes involves Hiro and his school peers racing through the city streets in a dogged attempt to outrun their antagonist, who is just as eager to see them all destroyed as they are about surviving the ordeal.

There are subtle nods here to some other film sources. Beyond the fanciful implication of its original material – a comic book series that I never heard of prior to this undertaking – the movie also finds traces of inspiration from “Real Genius,” an obscure ‘80s comedy that effectively helped launch the career of Val Kilmer. Like that movie, “Big Hero 6” finds its primary source of amusement in the accompaniment of colorful nerd characters: or more specifically, an ensemble of science-literate outcasts who are there to provide background noise in the innocent moments, and then a bizarre sense of synergy during times that require them to unite and use their brains for ambitious needs. So, too, does the movie create parallels with “The Incredibles,” Pixar’s brilliant yarn about a family of misfit superheroes; when the plot mandates that Hiro and his schoolmates “enhance” themselves for battle against a this new and dangerous villain, they step into the roles of skilled alter-egos using their knowledge of science to fuel the physics of their costumes and super powers. That decision yields a great deal of humor that is only amplified by the centerpiece of their ensemble: a giant inflatable robot named Baymax, who was created by Hiro’s brother as a health-care provider and anchors their wild antics with a sense of loveable wisdom that only an objective computer processor could verbalize.

Unfortunately, the movie builds them all within such effective and exciting momentum that by the time it finally does reach the obligatory reveal and climax, there is no clear idea as to how their skills can be used beyond momentary impulse. That dilemma rests entirely on the failure of the script to grasp the importance of being able to explain the inner-workings of its villain and the necessity he has for doing what he does; rather than come up with scenarios that are relatively unique or intriguing, what we get is that ever-so-cliché explanation in which a masked man’s villainous deeds can be chalked entirely up to short-sighted vengeance. That might have been okay in an animated film will less lofty ambitions, but we are dealing with something more than just simple one-note narrative formalities here; because the plot is so enthusiastically driven by the scientific sensibilities of its characters, the knee-jerk response of their primary nemesis seems all the more lazy, especially considering the hindsight that follows his ensuing actions. Taking that prospect entirely away from consideration, and “Big Hero 6” is really quite an amazing spectacle; but as a whole, it’s one of those movies burdened by the responsibility of living up to a promise impossible to match without a more thoughtful final act. Someone at the other end of the pen ought to have considered that notion in script rewrites.

In regards to why the film ends the way it does, it's an origin story. Origin stories call for low-level villains, barely villains even. You can't expect the heroes to go up against some crazy force when they only recently have gotten their suits and powers. I feel the villain in the film is suitable for the experience the heroes have.