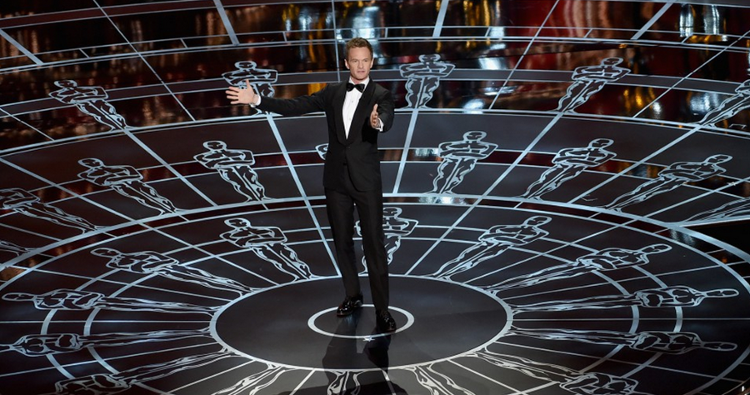 Unfortunately for him (and us), the night’s primary intent was so inundated by a forlorn sense of “let’s just get this over with” sentiment that few, even he, could counterbalance it with something of merit. About halfway into the telecast, we got the sense that his antics had all but evaporated his own enthusiasm, and his jokes – ranging from a nonsensical “prediction box” sitting off to stage right to an arsenal of comical misfires directed at subdued audience members – were the sort often seen of talented individuals who choose to give up in the thick of mediocrity. It was a night of sleepy customs occasionally punctuated by streaks of audacious rhetoric, but if an audience appears too removed from the condition to generate much interest in the antics of outspoken winners, then you know something is amiss.

Was it the exhausting campaign of movie studios that brought this gallery of actors and filmmakers to such disenchanted lows? The back-and-forth projections? The conflicts of the outer world? Their lack of zeal suggested that the chaos and disorder of 2014 was the true winner of the Academy Awards, even as the trophies were being handed out to films built around opposing values. The night’s two biggest winners, ironically, play like a protest against that grain: “Birdman” and “The Grand Budapest Hotel,” each leading the night with nine nominations, walked away with four awards a piece. It was ultimately the former – Alejandro González Iñárritu’s challenging and humorous character study about an actor vying for Broadway infamy – that walked away with the top prize, and perhaps that isn’t as big a surprise when you think about it: when it comes to the underlying notion that the movies can save us from ourselves, there is nothing Hollywood admires more than a film about the very industry that employs them.

Elsewhere, minds were perplexed by the seemingly startling shift in momentum that “Birdman” experienced late in this race – especially in relation to Richard Linklater’s “Boyhood,” which began the awards season as the clear front-runner before stalling behind the last-minute promotional blitz that Iñárritu’s picture experienced. In a night that ought to have recognized innovations, “Boyhood” only walked away with one award: that of Best Supporting Actress for Patricia Arquette. To acknowledge that reality is to shrug off yet another perception that the Academy Awards are the final word in a year’s worth of defining achievements, especially when one considers the dramatic shift the ceremony took in the 21st century when (as an example) “Gladiator” bested “Crouching Tiger, Hidden Dragon,” which is perhaps more fondly remembered.

I preferred “Birdman” to “Boyhood” as an entertainment, but the Oscars are not usually about the top of the heap in quality; they are about creating imprints of the most important achievements of any given year. While Iñárritu’s film was technically skillful, Linklater’s was something more formidable: a defining statement in the way films can be made. Over the course of 12 years, he and his team of actors and technicians captured the evolution of a simple boy in front of moving cameras as he experienced all the profound sensations that accompany adolescence, and wound up with a film that was not only truthful in conviction but robust in its dedication. Never before had a motion picture been created using such a strategy and it is unlikely that anyone else in the field would have undertaken such a rigorous (and risky) responsibility. What movie will be talked about more twenty years from now? There is no question that his work will live on as an important benchmark in the evolutionary dexterity of modern cinema. That is not to diminish the value of Iñárritu’s film in the least, but to highlight the subjective nature that movies tend to have on us over time.

As for the assortment of other winners, there were a few surprises. The most pleasant of them: all eight of the nominated Best Pictures actually walked away with some honor or another during the evening (a reality that is rare, especially in this age of more sizable pools for top contenders). “Selma” won one of its two nominations in the Original Song category for the stellar “Glory,” and it was preceded by a performance that was the most emotionally overpowering of the night (the acceptance speeches from Common and John Legend, furthermore, echoed that sentiment with piercing honesty). “American Sniper” received one trophy in the Sound Editing category, perhaps as the most innocuous way to honor a film that has been a phenomenal hit at the box office while controversially dividing the political landscape of the Hollywood elite. “The Theory of Everything” won its only distinction in the lead actor category, where Eddie Redmayne succeeded at besting frontrunner Michael Keaton. And “The Imitation Game,” the night’s arguable dark horse, managed to persevere in the Adapted Screenplay category. Its recipient, the gracious Graham Moore, also can be credited with the best of the night’s acceptance speeches; after revealing that he attempted suicide at age 16, he went on to encourage others in similar mental states to “stay weird” – because in the end, that quality could, too, result in them standing at the center of the auditorium accepting an Academy Award.

The night’s most obscure contender – the wonderful “Whiplash” – wound up collecting three trophies, in a bold and unprecedented move that demonstrated just how powerful new voices in film continue to be when contrasted against more seasoned talents. The sophomore endeavor by writer/director Damien Chazelle won honors in Film Editing and Sound Mixing, and J.K. Simmons’ volatile performance kicked off the night with the Best Supporting Actor Oscar. In a bid to continue to advance the cause of independent films, the voting body was sure to offer additional honors to other notable indies – including “Still Alice” (which won Julianne Moore her first Oscar in five nominations) and “The Grand Budapest Hotel,” the most lauded of Wes Anderson’s many quirky comedies (it won four in the technical categories).

Alas, the realities of victory played like essential formalities in the end, and were seldom harmonious with the general air of complacence that fueled the ceremony’s trek through one presentation after another. In any other year, the genuinely audacious acceptance speeches by Arquette, Moore and Simmons would have been part of a checklist of memorable moments, but here they seemed more like fireworks set off in a display of comatose observers. And unfortunately, by the time Harris caught onto that prospect as the night’s emcee, he was too far gone in his own subdued shtick to pump energy back into the display. Was he a bad host, per se? I don’t believe so. But perhaps his underlying desire to play cautious with his material is more suited for a Broadway audience rather than a Hollywood one. The Academy Awards, especially now, require more corrosive or vivacious voices standing at the center of the mediation. Think of Hugh Jackman or Ellen DeGeneres, who knew exactly how to play up the enthusiasm and keep the momentum in the favor of optimistic output. It’s impossible to celebrate the achievements of the movies if the one hosting the part is easily lost in the safe diatribes of a foreign tongue.