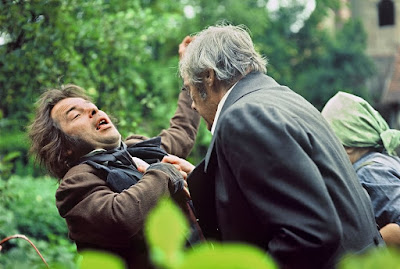 Therein is the key distinction that separates Herzog, a very meditative filmmaker, from most of his contemporaries. We are trained in modern times to expect certain proclivities from a story of strange beings in strange lands – namely, narrative exercises that show such characters growing and evolving in the embrace of frustration before finding a comfort that brings their inner brilliance to light. Hollywood filmmakers generally see no other path in telling that kind of story; for them, there’s no future in it. But “The Enigma of Kaspar Hauser” is the embodiment of a man who thinks in contrasting sentiments. It is an unsmiling portrait of a man who was never destined to make it beyond the function of confusion, and the movie behaves in the same paradoxical passages that would become the norm for his chaotic life. For many, that thought process violates many of the comforts of the filmgoeing experience; what point is there if there’s no linear story to follow, or no sense of uplift to shield us from the dreadful acknowledgment that the world is a crumbling heap of failed dreams?

Sometimes an antithesis says more about humanity than a glossy embellishment. At the beginning of the picture, narrative cards announce the arrival of a young man in a town square with no known history; carrying a note from an undisclosed caretaker, it informs the important figures that he is as new to the outside world as a newborn plucked from a womb. In the early scenes, Herzog interprets that arrival with morose realizations. We at first see Kaspar mumbling indistinct utterances in a small dark  room, and from there see his possessor – a cloaked man without a face – prepare him for sudden departure. He teaches the young man how to sign his name. There are struggles to get him to stand up. And once the journey begins, Kaspar’s eyes are so enamored by simple sights (even trees and grass are new to him) that they seem hypnotized in despair. And when the moment comes for his keeper to cruelly abandon him in the middle of a city, he doesn’t react; it’s because to him, even something as simple as that is nothing but an exotic concept.

Many of the specifics in the movie are fictionalized, but of course they are; Herzog requires that they exist only to enhance an overreaching effect, which is used to add subtext to an underlying mystery (and awe to an obligatory outcome). These things are essential in maneuvering through countless scenes that show Kaspar struggling with his own development, otherwise our responses would embody the same displacement. Townsfolk show him animals, introduce him to new foods, and teach him how to pronounce words. They are marveled by his predicament, but not very sympathetic. Sentences come much later, though few of them he can comprehend deeply. Often his eyes flutter in rapid fashion, especially when he is left to absorb new visuals and surroundings. He is moved so deeply by some human sensations that he is frequently reduced to tears of understanding (“The music feels strong in my heart. I feel so unexpectedly old.”). His plight inspires the town to briefly sell him as a carnival sideshow attraction. And once his thoughts evolve over the course of two years of intense education, he finds himself in mixed perspective on the idea of God and religion – what place do they have, perhaps, in a world where people like him are given such hard and cruel roads to travel?

Littered across the paradox of primitive societies are the histories of a people without answers to important questions, and as listeners we are often driven to philosophical ecstasy by such puzzles. As one of the more obscure examples of that reality, Kasper is certainly one of the most fascinating. As distant as the standards of 19th century culture may be now, there is still something rather proverbial about the considerations of one’s vanished identity. Was this poor man’s isolation a result of individual cruelty, or the outcome of a people’s general ambivalence? Perhaps that acknowledgment was attractive to a director like Werner Herzog because of how parallel the mystery played to the standards of the modern world, where world populations were overrun and most human faces were nothing more than symbols in an inaudible crowd. To him, one gathers that Kaspar was the embodiment of where industrialized civilization was headed: in a direction where most people are destined to lead a life chained to the dungeon of obscurity, with little hope of their own escape. Does that also inform the direction of many of his key sequences in the film? Of course. The conclusion, an ominous marriage of tragedies, is the most evident of that; whereas most stories this sad would end by briefly celebrating a legacy, to the people of Nuremberg, Kaspar is no more than a random case study, a shell of flesh where humanity was never allowed to develop fully.

If the legend of this poor entity is important to exemplifying that statement, then the lead performance is integral in anchoring it. Bruno S., an eccentric man who spent most of his life in and out of asylums, was not an actor in any conventional sense when he came to Herzog’s attention, but the director was so enamored by his presence that he was certain he was meant for the silver screen. Just as some of his earliest subjects – particularly Klaus Kinski – were key in expanding the awareness of what screen performances could be, Bruno was like a revelation in that respect. His embodiment of this poor being is not a mere job of acting; it is an embodiment of characteristics that mirror the underlying function of his situation, which plays less like the result of human cruelty and more like the weight of the world subjecting him to puzzling oppression. And the movie’s various images of wide grassy fields and long treks through a desert – many of them unrelated to the core narrative – are there to signify not only how challenging Hauser’s situation is, but also how universal.

Not surprisingly, Herzog has made several dozen films that insist this idea in a plethora of hard-worn scenarios. “Aguirre, the Wrath of God,” his greatest film, is exemplary to that thought process; it shows a group of explorers searching for a fabled city of gold, all while one pushes them to the brink of their sanity. “Fitzcarraldo,” about a man who drags an opera boat across a wide gulf of land, reflects the impossibility of our challenges against nature. And “Grizzly Man,” a documentary about Timothy Treadwell (who went to live and die with grizzly bears), is the personification of the unending battle between a system of chaos and a humanity that blindly mistakes the possibility of order. What all of these films reveal is the identity of a filmmaker who is just as much driven by mysteries as he is by thoughtful themes. For him, Kaspar Hauser represents perhaps the most probing of those insights. This was a man destined to misfortune. And in a world where the universe is meant to crush our aspirations, seldom has there been a film made that has been so honest about such ideas, or as poetic.